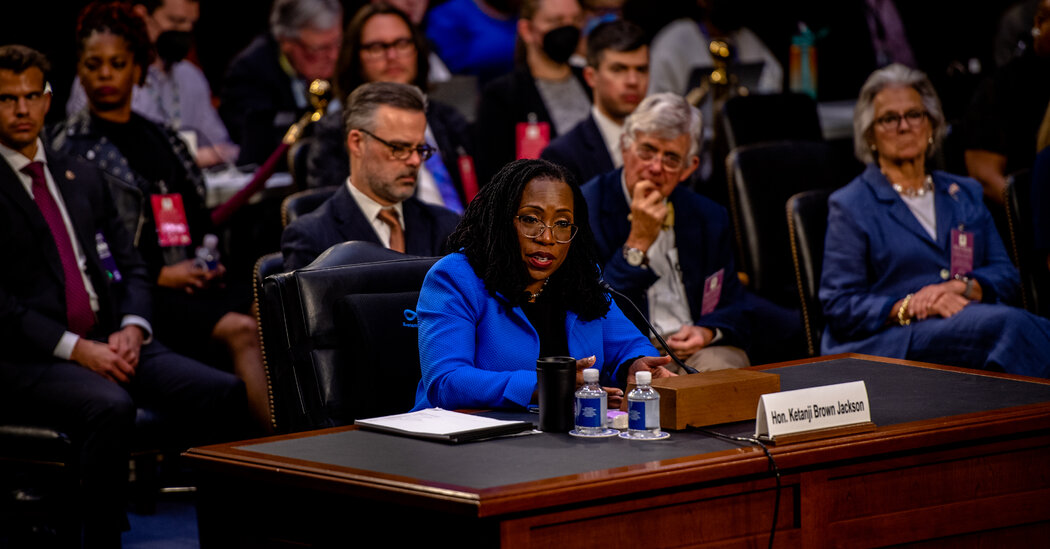 Judge Ketanji Brown Jackson spent two days answering senators’ questions about her Supreme Court nomination — some easy ones from Democrats about her qualifications, and some tough ones from Republicans about, well, lots of things.

Next, the Senate Judiciary Committee is set to vote on Jackson’s confirmation on April 4, and after that the full Senate will hold a vote. Democrats say they want her confirmed to the bench before their Easter recess.

Members of both parties seem to have gotten what they wanted out of the hearings, even if the path to get there sometimes felt like a long and exhausting circus.

Here’s what we learned:

For some Republicans, this was about far more than the Supreme Court.

Critical race theory, children’s books, the definition of the word “woman”: Over the last week, Republican senators pressed Jackson on hot-button cultural issues that seemed to fall far outside the realm of the Supreme Court.

Of course, some were in fact interested in legalistic topics. Senator Thom Tillis, a Republican from North Carolina, said that he wanted to talk about “the weighty subject of intellectual property” and to return to questions about sentencing in cases involving child sex abuse imagery only once “we cool the temperatures.” Other Republican senators like Marsha Blackburn of Tennessee and John Cornyn of Texas asked questions about Roe v. Wade.

But the loudest voices in the room focused on amplifying social conflict that Republicans are highlighting ahead of the midterms, lamenting their Democratic colleagues’ treatment of the G.O.P.’s recent Supreme Court nominees, and painting Democrats as soft on crime.

Two Republican senators, Mike Lee of Utah and Ted Cruz of Texas, mocked Jackson for declining to answer a question from Senator Blackburn: “Can you provide a definition for the word ‘woman’?”

Senator Lindsey Graham, Republican of South Carolina, repeatedly returned to Democrats’ past treatment of Republicans’ judicial nominees. He accused Democrats of having “literally ambushed” Brett Kavanaugh during the Supreme Court justice’s confirmation hearing in 2018, when it emerged that Kavanaugh had been accused of sexual assault. “How would you feel if we did that to you?” Graham asked Jackson.

Just before, Graham said she had not done enough to deter people from obtaining child sex abuse imagery and videos.

Republican senators like Graham — along with Cruz and Josh Hawley of Missouri — are unlikely to be able to block Jackson’s confirmation, so it wasn’t surprising that they used their time in the limelight to try to score political points and speak to an audience far outside the halls of Congress. Their recurring focus on child sex abuse cases particularly resonated with QAnon supporters, although it also fit in with the party’s longstanding attacks on Democrats as being weak on crime.

At times, the G.O.P.’s strategy didn’t mesh neatly with its senators’ aims.

The aggressive approach by Republicans appeared to be part of a bigger messaging strategy ahead of the midterms.

Throughout the week, the Republican National Committee has posted videos on Twitter of what it saw as the most noteworthy moments of the hearings, including when Cruz asked if he could benefit from affirmative action if he simply decided he were Asian. The R.N.C. also posted videos of Blackburn asking for the definition of “woman” and Cruz expressing disbelief that Jackson would not answer.

But beyond pressing a careful midterm message, some Republican senators created fireworks. Cruz declared that he would not stop talking as Senator Richard Durbin, a Democrat from Illinois who leads the Judiciary Committee, pounded his gavel. Cruz repeated that Durbin was preventing “the American people” from hearing Jackson’s answers.

Such drama isn’t new. On the House floor, at least, it goes back to the 1840s and 1850s, said Joanne Freeman, a Yale historian who has written about the history of conflict in Congress. The difference, she said — other than the fact that we no longer expect members of Congress to pull a Bowie knife — is that today’s theatrics are increasingly political, rather than orchestrated to achieve a particular policy goal.

“This is pandering to the base, and the Supreme Court is beside the point,” she said.

At one point, Senator Patrick Leahy, Democrat of Vermont, pushed Durbin to stop Cruz from cutting in. “I know the junior senator from Texas likes to get on television,” Leahy said. “But most of us have been here a long time trying to follow the rules.”

Senator Ben Sasse, a Nebraska Republican, put it in a different way: “I think we should recognize that the jackassery we often see around here is partly because of people mugging for short-term camera opportunities.”

Democrats mostly played it safe, and are happy to avoid any major stumbles.

At times, Democrats seemed to be playing defense ahead of the midterms. But those goals tended to overlap with getting Jackson across the finish line. And, for the most part, Democrats didn’t engage after Republicans lobbed attacks at Jackson and them during the hearings.

Democrats repeatedly prompted Jackson to discuss her personal connections to law enforcement, including several family members who were longtime police officers. Those anecdotes offered some protection to Jackson even as Republicans attacked her sentencing record and accused her of being soft on criminals. But the exchanges also allowed Democrats to counter messaging that they oppose the police, which might have cost them key congressional seats in 2020 as some in the party believe.

Democrats occasionally pushed back against Republicans, as when Durbin and Leahy tried to cut off Cruz.

But those moments were rare. And Jackson herself continued to calmly repeat the same answers — even as senators raised their voices.

Jackson’s allies in the White House believe she managed to weather the Republican attacks while avoiding major damage, and have passed around the results of a Gallup poll showing her with high public support.

Jackson isn’t going to get the same bipartisan support as other Supreme Court “firsts.”

Most of the justices who represented a historic “first” for the Supreme Court received bipartisan support. That’s unlikely to happen with Jackson, who would be the first Black woman to sit on the court.

But Jackson could end up being confirmed with votes from just 50 senators — all Democrats and left-leaning independents — and the vice president. Mitch McConnell, the Senate minority leader, announced Thursday afternoon that he would not support her confirmation.

That doesn’t mean Republicans ignored the significance of her nomination. Sasse told her she was “going to be a hero.” But even as some Republicans complimented her for her poise, intelligence and qualifications, few offered any signal that they were willing to vote to confirm her.

Perhaps that’s why, at the end of the day, Democratic senators brought up the history-making nature of her nomination. “I’m not letting anybody in the Senate steal my joy,” Senator Cory Booker of New Jersey said. And when Senator Alex Padilla, Democrat of California, asked her what she’d tell young Americans who “doubt that they can one day achieve the same great heights that you have,” the moment seemed to sink in for Jackson.