Swarms of Black Holes at the Milky Way’s Heart? Maybe Not 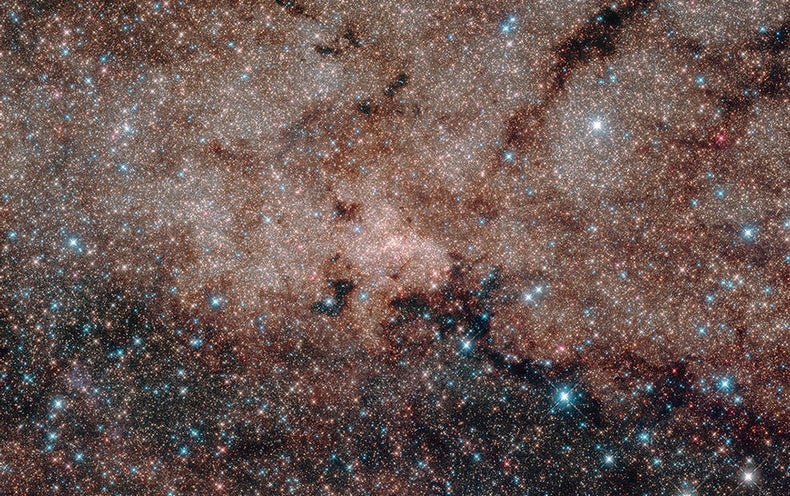 What lurks at the Milky Way’s heart? Astronomers have known most of the answer for decades. Just as in most large galaxies, a supermassive black hole sits at the core of our own island in the universe, enveloped in a swirling maelstrom of molecular clouds and stars.

But something seems to be missing from this picture: the stellar-mass black holes that can be produced when the heaviest stars die. Theorists have long predicted that such black holes should exist in abundance in our galaxy’s star-packed center, but evidence for their presence there and in the so-called nuclei of other large nearby galaxies has proved scarce. Astronomers chalked this up to black holes simply being too faint to pick out against the noisy x-ray background.

Four years ago Chuck Hailey, an astrophysicist at Columbia University, published a paper in Nature in which he and his co-authors argued they had at last spied the Milky Way’s hidden swarm of black holes—or rather the swarm’s most flamboyant members. If some of those black holes were binaries—meaning they orbited alongside another object, usually a star—they should siphon off material from such companions that, in the process, would heat up and emit detectable x-rays. Using more than a decade of archival data from NASA’s Chandra X-Ray Observatory, Hailey and his colleagues found a dozen previously unknown sources of x-ray emission in the vicinity of the Milky Way’s core—each of which, they say, likely represents a black hole feasting on a star. Collectively, the dozen candidates would thus betray the presence of a population of thousands upon thousands of unseen, quieter kin.

Now, however, a new study from another team has called that interpretation into question. It instead posits that the x-ray signals from the galactic core are just as likely to be caused by neutron star binaries. A Milky Way bereft of the long-predicted central swarm of stellar-mass black holes would be troubling, to say the least, because it would suggest that large gaps remain in theorists’ understanding of how galaxies work.

Finding out whether or not the Milky Way’s heart hosts a swarm of black holes is important, says Saavik Ford, an astronomer at the Borough of Manhattan Community College, precisely because that knowledge could greatly aid scientists in answering several lingering questions about galaxy formation and evolution. “We would like to understand how galaxies assemble, and the nuclei seem to play important roles,” says Ford, who was not involved with either of the studies. “We know that the mass of the supermassive black hole is correlated with large-scale characteristics of mature galaxies, but we don’t know exactly how those supermassive black holes manage to grow as big and as quickly as they do.”

A galaxy’s black-hole-filled nucleus would also be a prime locale for exotic astrophysical events that produce the gravitational waves astronomers are now finding with increasing regularity. These ripples in the fabric of spacetime can come from many cosmic sources, but those arising from mergers of stellar-mass black holes are presently easiest for current facilities to detect. Such mergers should happen most often wherever stellar-mass black holes are most concentrated. And galactic nuclei remain theorists’ best bet for where those conditions occur.

A Matter of Timing

Tom Maccarone, an astrophysicist at Texas Tech University and lead author of the new study, which appeared in Monthly Notices of the Royal Astronomical Society last month, notes that no one is disputing the existence of the tantalizing x-ray sources reported by Hailey and company, and some of those sources may indeed be linked to black holes. Rather Maccarone and his co-authors take issue with the previous paper’s analysis and interpretation in a way that, they say, undermines its core conclusions.

“Hailey’s team found objects that are either neutron stars or black holes in binaries,” Maccarone says. “Everyone agrees about that. The data is good. It shows the objects don’t have [recurring short-period] outbursts. Everyone agrees about that, too.” The heart of the debate, Maccarone says, is that “Hailey claimed this means they must be binary black holes because binary neutron stars [supposedly] outburst every five years or so. But he never checked if that is actually true. I did, and it’s not true.”

Neutron stars are the city-sized remnants of expired massive stars. They are not black holes, but their gravitational pull is so strong that they look and act like black hole imposters, and they are also thought to be prevalent in the Milky Way’s core. Like black holes, they have the ability to capture and devour a companion, and they can occasionally burp out huge blasts of x-rays as they feast. It may be impossible to tell from looking solely at x-ray emissions if an x-ray binary system contains a black hole or an imposter neutron star.

Some astronomers, Hailey and his co-authors among them, postulate that the distinction can be made by carefully monitoring the timing of an x-ray binary’s outbursts. X-ray binary systems containing a black hole, they argue, would flare less frequently than others harboring a neutron star. A paucity of data makes theorists uncertain, but their work suggests this may be true. Observers have yet to conclusively show that any timing difference exists at all, however. In search of answers to these questions, astronomers are—for now—fumbling in the dark at the frontiers of their field.

Equating neutron binary stars to speedy recurring flares, Maccarone maintains, is nothing more than astronomical lore; it is a product of statistical artifacts in biased data sets. Specifically, he says, neutron stars that repeatedly flare every five to 10 years are overrepresented in astronomers’ catalogs because such systems simply offer more useful data, compared with more quiescent neutron stars that exhibit less frequent outbursts.

To prove his point, he and his co-authors examined neutron star data from NASA’s Rossi X-ray Timing Explorer (RXTE), which launched in 1995 on a 16-year mission to survey the entire sky for time-dependent x-ray emissions. Their analysis showed that RXTE found numerous flaring neutron stars with recurrence times of more than a decade, and it found many more that flared once but have yet to repeat. The breadth, depth and duration of RXTE’s survey and its resulting harvest of x-rays from flaring binary neutron stars implies that tens of thousands of these systems could exist undiscovered throughout the Milky Way, Maccarone says. Simply put, their prevalence has been dramatically underestimated because their typical recurrence times exceed the durations of astronomers’ longest, most keen-eyed surveys.

According to Harvard-Smithsonian Center for Astrophysics astronomer Kareem El-Badry, who was not a part of either team, this underscores the deeper, more general problem of nature’s indifference to our all-too-human limitations. Cosmic events can and do occur on timescales that dwarf the life spans of individuals and even entire civilizations, which perversely means that relying solely on observations is a surefire way for astronomers to get a biased view of what is out there. “You can imagine there might be a large population of neutron star binaries that have an outburst every million years, but you would never see them if you only observe for a few decades,” El-Badry says. “Recurrence time is not necessarily a good indicator for whether something is a black hole or a neutron star binary.”

In his defense, Hailey notes that he never claimed all of the dozen point sources were black hole binaries. Instead he showed that, given the sources’ characteristics, they were likely black hole candidates, and this statistically tips the scale toward a black hole swarm at the Milky Way’s heart. “Even a handful of black hole binaries in the galactic center implies the existence of hundreds to thousands of isolated black holes,” he says.

Furthermore, he has criticisms for his critics, who he says have allowed biases to corrupt their own conclusions. The analysis by Maccarone and his colleagues, Hailey says, overly relies on neutron star data from globular clusters, which are ancient aggregations of old stars scattered across our galaxy. The myriad differences between somewhat sedate globular clusters and the action-packed environs of the galactic center, he says, stack up to invalidate comparisons between their respective populations of neutron stars.

“An analogy would be that what Maccarone has done is try to extrapolate the number of skyscrapers in New York City by studying how many he observes in suburban Texas,” Hailey says. “These are different environments, and one will obtain misleading conclusions.”

Additionally, Hailey and his colleagues say, they are puzzled as to why Maccarone would use the somewhat outdated RXTE data when more sensitive surveys of x-ray sources now exist.

Maccarone responds that “using the higher-quality x-ray monitoring data on the galactic center region doesn’t help us because we don’t know the nature of the x-ray sources. It would require circular logic. Are they black hole binaries or neutron star binaries? That’s the very debate.”

For now, swarms of black holes still remain the dominant explanation for the mysterious x-ray sources at the Milky Way’s heart in keeping with the more extensive theoretical legacy of that hypothesis. The inconvenient truth may be that this puzzle has no one-size-fits-all solution, and a mix of black holes and neutron stars account for the observations. “The reality is: the universe would have to be pretty pathological for there to be no black holes in the galactic center and similarly for there to be no neutron stars,” Ford says.

Further clarity may come relatively soon. An upgraded “next generation” version of the Karl G. Jansky Very Large Array of radio telescopes in New Mexico could begin operations toward the end of the 2020s and settle the debate. The array will be sensitive enough to measure the sources’ faint radio waves, and a simple comparison between them and the x-ray emissions should discern whether any given source is a neutron star or a black hole.

“This controversy underscores the need for multiwavelength astronomical data sets,” Maccarone says. “The x-ray data can identify interesting sources, but now we need radio or infrared data to solve the problem.”

For Hailey, the debate itself is its own sort of vindication—a testament to the impact of his 2018 paper and its role, however small, in bringing scientists closer to the truth. “The paper has accomplished more than I hoped for,” he says. “It has generated enormous theoretical interest and, I guess, more than a little controversy along the way. It all makes for good fun.”