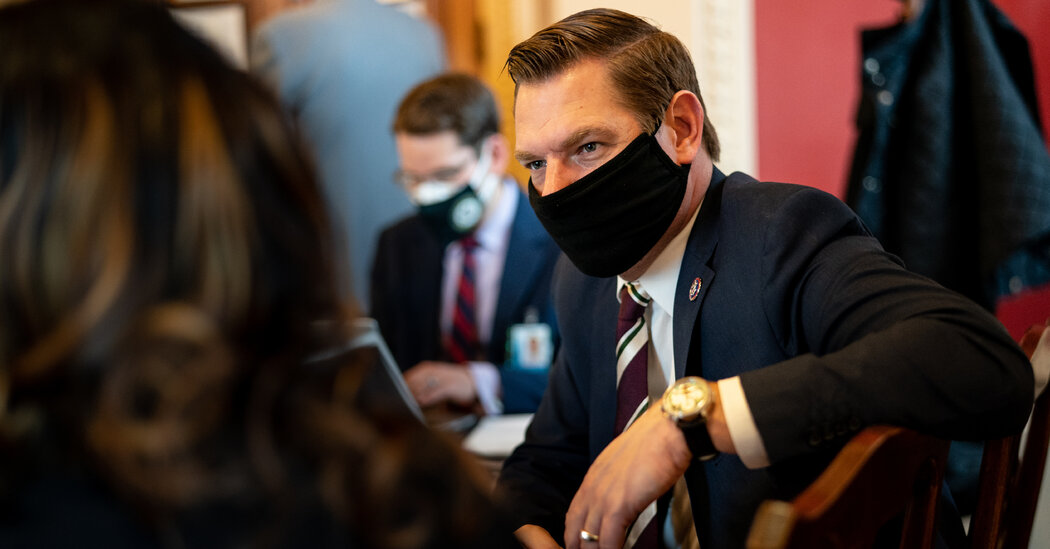 A House Democrat who unsuccessfully prosecuted Donald J. Trump at his impeachment trial last month sued him in federal court on Friday for acts of terrorism and incitement to riot, attempting to use the justice system to punish the former president for his role in the Jan. 6 assault on the Capitol.

The suit brought by Representative Eric Swalwell, Democrat of California, accuses Mr. Trump and key allies of inciting the deadly attack and conspiring with rioters to try to prevent Congress from formalizing President Biden’s election victory. And like the case laid out in the Senate, which acquitted him, it meticulously traces a monthslong campaign by Mr. Trump to undermine confidence in the 2020 election and then overturn its results.

“The horrific events of January 6 were a direct and foreseeable consequence of the defendants’ unlawful actions,” asserts the civil suit, filed for Mr. Swalwell in Federal District Court in Washington. “As such, the defendants are responsible for the injury and destruction that followed.”

Though not a criminal case, the suit charges Mr. Trump and his allies with several counts including conspiracy to violate civil rights, negligence, incitement to riot, disorderly conduct, terrorism and inflicting serious emotional distress — findings that could severely tarnish his legacy and political standing. If found liable, Mr. Trump could be subject to compensatory and punitive damages; if the case proceeds, it might also lead to an open-ended discovery process that could turn up information about his conduct and communications that eluded impeachment prosecutors.

In addition to the former president, the suit also names as defendants his eldest son, Donald Trump Jr., his lawyer Rudolph W. Giuliani and Representative Mo Brooks, Republican of Alabama, who led the effort to overturn Mr. Trump’s election defeat when Congress met on Jan. 6 to formalize the results. All three men joined Mr. Trump in promoting and speaking at a rally in Washington that day, which Mr. Swalwell says lit the match for the violence that followed.

A majority of the Senate, including seven Republicans, voted to find Mr. Trump “guilty” based on the same factual record last month, but the vote fell short of the two-thirds needed to convict him. Even Republicans who voted to acquit him, like Senator Mitch McConnell of Kentucky, the minority leader, concluded that Mr. Trump was culpable for the assault. Many Republicans argued that the Senate simply lacked jurisdiction to punish a president no longer in office, and said the courts were the proper venue for those seeking to hold him accountable.

The lawsuit adds to Mr. Trump’s mounting legal woes. Another Democratic congressman, Bennie Thompson of Mississippi, has already filed suit on similar grounds in recent weeks with the N.A.A.C.P. Prosecutors in New York have active investigations into his financial dealings, and in Georgia prosecutors are investigating his attempts to pressure election officials to reverse his loss.

In a statement, Jason Miller, an adviser to Mr. Trump, blasted Mr. Swalwell as a “a lowlife with no credibility” but did not comment on the merits of the case. Mr. Giuliani and spokesmen for Mr. Brooks and Donald Trump Jr. did not immediately respond to requests for comment.

During the Senate trial, Mr. Trump’s defense lawyers flatly denied that he was responsible for the assault and made broad assertions that he was protected by the First Amendment when he urged supporters gathered on Jan. 6 to “fight like hell” to “stop the steal” he said was underway at the Capitol.