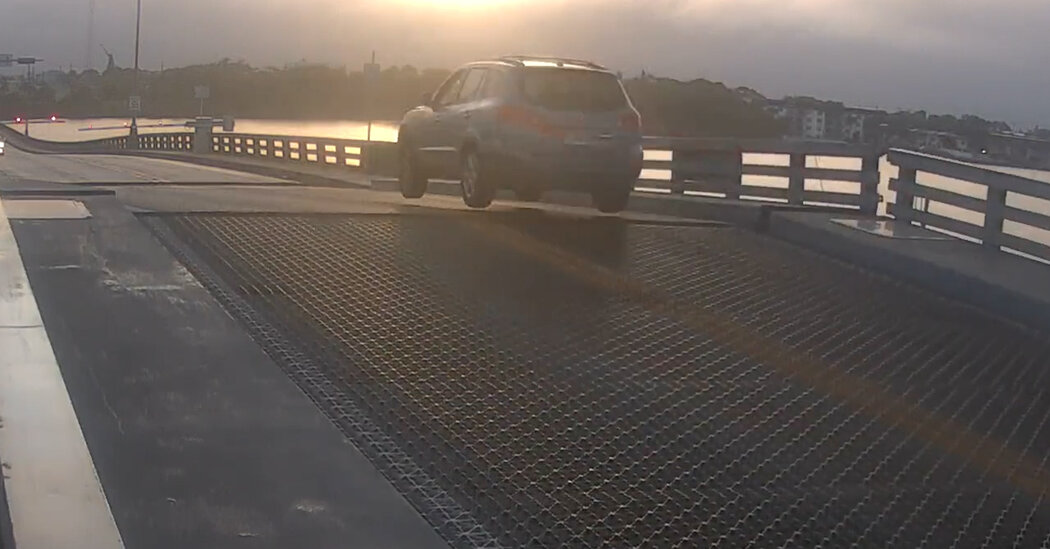 As in a scene from a “Fast & Furious” spinoff, a driver in Florida this week jumped across a drawbridge just as its ramps were being raised.

Video of the jump, captured by a security camera, showed a gray S.U.V. hopping from one side of the bridge to the other Monday evening in Daytona Beach, Fla.

Heading east, the driver of the vehicle smashed through one traffic arm, jumped the bridge over the Halifax River, then tore through the second traffic arm on the other side, the Daytona Beach Police Department said.

Messod Bendayan, a spokesman for the Police Department, said on Friday that investigators believed they had identified the driver, but that no arrest had been made. Both traffic arms were damaged and replaced, Mr. Bendayan said.

It was unclear whether the jump was performed out of a desire for adventure or impatience to get to the other side of the river.

The Florida Highway Patrol did not immediately respond to a request for comment Friday.

Bonnie Frank, a Florida Safety Council spokeswoman, told WOFL in Orlando that such stunts were dangerous and illegal.

“You’re not just risking yourself, you’re risking all those other people that are also up on that bridge,” Ms. Frank told the station.

Footage of the jump spread wildly on social media this week.

“People do crazy things to get good parking spot at the Flea Market,” the comedian Larry the Cable Guy said on Twitter.

A similar stunt occurred on the bridge last month during Daytona Beach’s Bike Week, a motorcycle event featuring races, concerts and a “blessing of the bikes” organized by a local church.

During the weeklong event, a motorcyclist was captured on film jumping the bridge as it was moving up. Video of the leap was posted on Twitter by Chief Jakari Young of the Daytona Beach Police Department, who derided the stunt as “Bike Week ‘shenanigans.’”

“Folks, please be safe and be smarter than this guy!” Chief Young said.

Although two jumps have been recorded within two months, Mr. Bendayan said he had not noticed a pattern of bridge-jump attempts.