Susan Collins says she opposes holding a vote on a replacement for Ginsburg before the election. 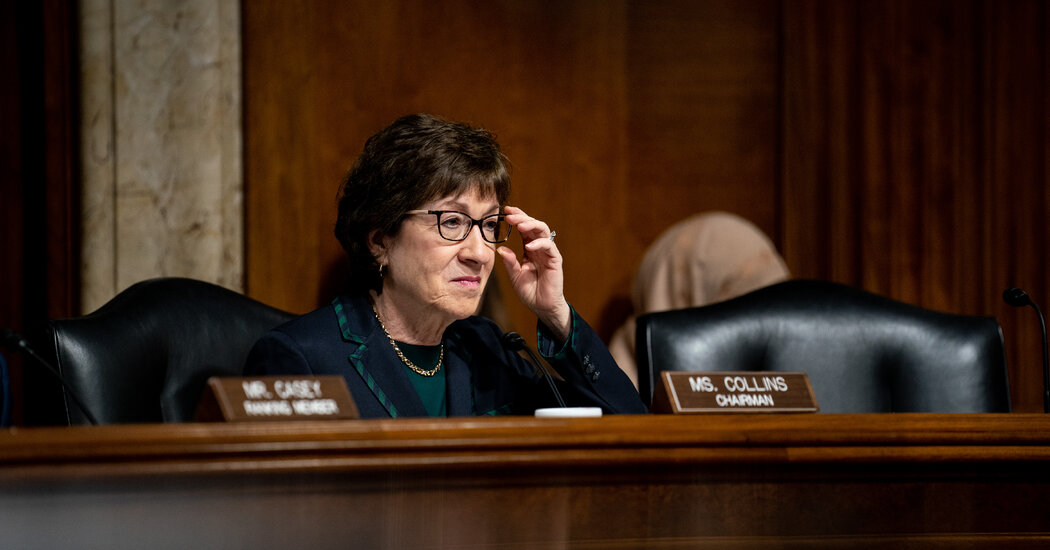 Senator Susan Collins, Republican of Maine, said on Saturday that she was opposed to holding a vote on President Trump’s Supreme Court nominee before the November election, and suggested that were he to lose, his successor should ultimately choose a nominee to replace Justice Ruth Bader Ginsburg.

The statement from Ms. Collins, who is considered a swing vote and is facing a bruising re-election fight, narrowed the already slim margin in the Senate in favor of confirming a Supreme Court nominee less than two months before Election Day, complicating the task of Senator Mitch McConnell, Republican of Kentucky and the majority leader, who has promised a vote.

It made her the first Republican senator to explicitly say, in the aftermath of Justice Ginsburg’s death, that she would not support such a vote before Nov. 3. Mr. McConnell can afford to lose no more than three Republicans.

“President Trump has the constitutional authority to make a nomination to fill the Supreme Court vacancy, and I would have no objection to the Senate Judiciary Committee’s beginning the process of reviewing his nominee’s credentials,” Ms. Collins said.

But she suggested that if former Vice President Joseph R. Biden Jr. won the presidency, she would oppose moving forward with a nominee chosen by Mr. Trump.

“In fairness to the American people, who will either be re-electing the president or selecting a new one, the decision on a lifetime appointment to the Supreme Court should be made by the President who is elected on November 3rd,” Ms. Collins said.

It was a carefully calibrated statement from Ms. Collins, who is entangled in the toughest race of her political career in part because she cast a decisive vote to confirm Justice Brett M. Kavanaugh in 2018.

In an apparent reference to 2016, when she was one of only two Republicans who opposed Mr. McConnell’s move to blockade President Barack Obama’s nomination of Judge Merrick Garland for the Supreme Court, Ms. Collins warned that, “we must act fairly and consistently— no matter which political party is in power.”