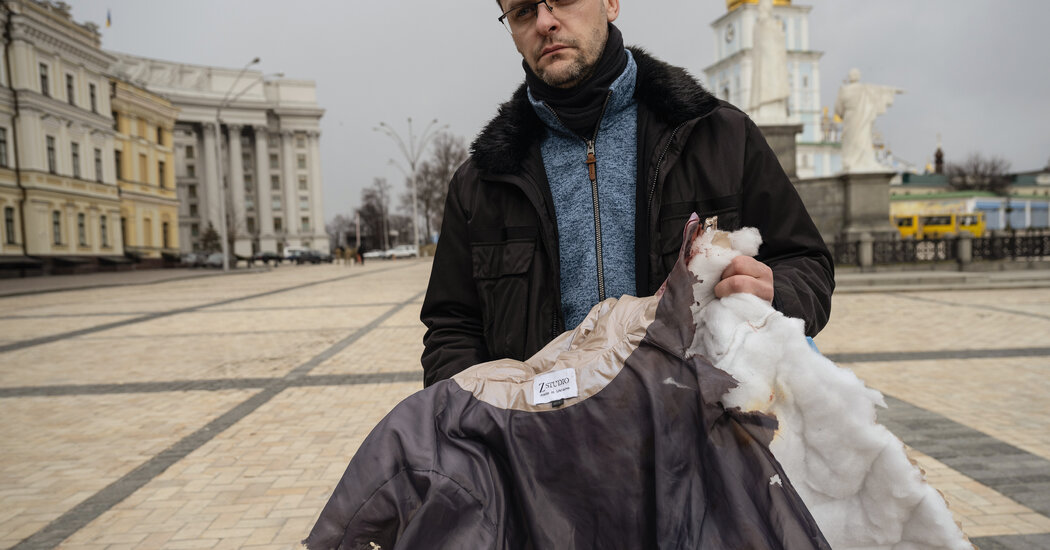 More than 10 million Ukrainians have been displaced and more than 4 million have fled the country since Russia invaded Ukraine on Feb. 24. Cities and towns throughout the country continue to be bombarded by Russian artillery. Some are now nearly unrecognizable. Civilians have died, families have been ripped apart and lives have been forever changed.

But within the chaos and disruption, reporters have witnessed moments of humanity and resilience: Neighbors helping one another; families reuniting after panic; people organizing aid.

Below, Times journalists on the ground in Ukraine and elsewhere share some of the displays of courage and acts of kindness they’ve seen over the course of the conflict.

I interviewed Eduard Zarubin, a 50-year-old urologist from Mariupol, Ukraine. The city is currently under siege — residents have no heat, water or gas, and it is nearly impossible to communicate with the outside world. There is very little food.

For three weeks, before he was able to get out of Mariupol, Mr. Zarubin and his son walked nearly eight miles every day to get clean water. I wrote about Mr. Zarubin’s experience in his home city, which now looks apocalyptic.

After I shared the article on Facebook, I noticed a comment written in Russian: “Eduard Zarubin and his family saved me and my wife. In besieged Mariupol, he brought me bread, medicine, and gave me hope for salvation. When we were ready to die, he took us out of the war zone. Now we have not been hiding from Russian planes, shells and missiles for a week now. Sincerely grateful for the rescue.”

Mr. Zarubin had not told me any of this in our interview. I was touched that in the worst of conditions, when no one had enough food or water, Mr. Zarubin was still able to provide so much help to those around him. To me, it really demonstrated the triumph of humanity over barbarity, and is indicative of the tremendous solidarity Ukrainians have shown one another.

Clare Toeniskoetter, senior producer on “The Daily,” reporting from a train station in Przemyśl, Poland

I met a young volunteer named Dmitriy at the train station. He was from Ukraine and had been working as a teacher’s assistant in Poland. He was there to help Ukrainian refugees in any way he could — by offering them a car ride or helping them find housing. He didn’t speak English, but we were able to communicate by using Google Translate on my phone. He kept desperately grabbing my arm, looking at me in the eyes with incredible sadness and saying all he could in English: “My family in Ukraine,” and “No war. No war.”

Natalya and Aleksandr Stanislavchuk were driving their white S.U.V. around Mykolaiv in southern Ukraine, delivering food to needy residents, when they received the call they had been waiting for.

It was their son, Yegor. After spending days hiding from the Russian forces that overtook the Kyiv suburb where he lived, he had escaped. In the confusion, he had lost all of his documents and his phone.

“All of that can be worked out,” Ms. Stanislavchuk told him. “You made it out alive — that’s the most important thing.”

Minutes later, an air-raid siren sounded and the Stanislavchuks rushed into a basement bomb shelter.

Tens of thousands of Russians, horrified by the war, descended on places like Istanbul, scrambling to escape a country growing more repressive by the day. Many of them lacked access to their bank accounts after Visa and Mastercard suspended operations in Russia.

They faced an unfathomable and uncertain future.

They tried to help each other: In Telegram chat groups, they exchanged tips about Covid-19 vaccines, Turkish residency laws and job openings. They volunteered to help Ukrainian refugees and joined protests. Those with money or connections organized aid groups and collected donations to provide the Russian exiles in greatest need with housing and legal aid.

What does it take to go to the morgue to identify one’s entire family, to sign the necessary paperwork, to collect the shredded and bloodied mauve coat of your true love and tuck it into a plastic bag to keep as one of your final memories? This, to me, embodies resilience.

It is hard to imagine the courage a husband and father (Serhiy Perebyinis) has to find to print out and frame portraits of his wife (Tetiana, 43) and two children (Mykyta, 18, and Alisa, 9), only to place them by their graves as reminders of their lives before they were upended and cut short by the constant, indiscriminate bombardments of war.

Self-healing robot recovers from being stabbed then walks off

Everything you need to know about the US megadrought