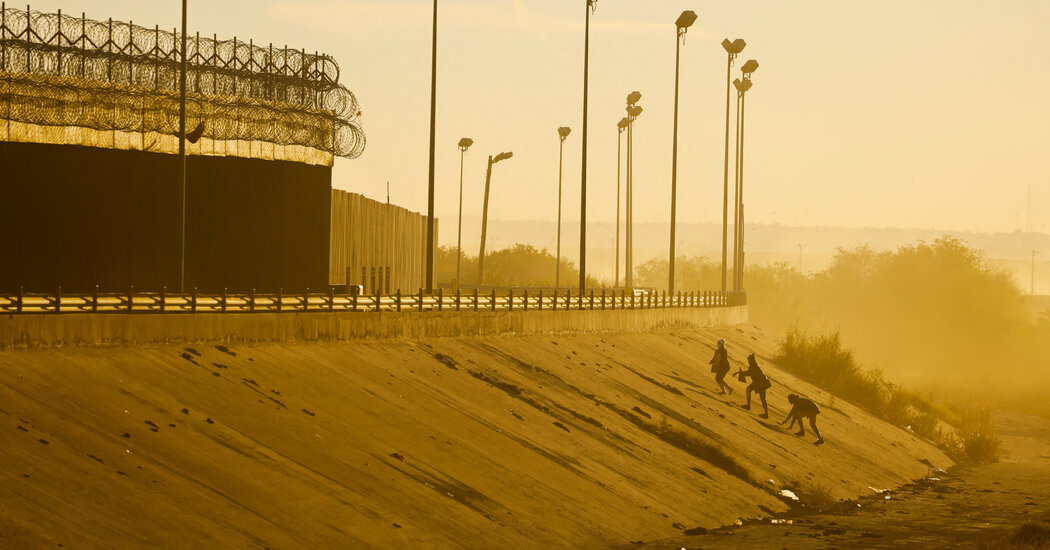 WASHINGTON — In a tense and tangled argument on Tuesday, the Supreme Court struggled to decide whether to revive immigration enforcement guidelines issued by the Biden administration that had set priorities for deciding which unauthorized immigrants should be arrested and detained.

Texas and Louisiana filed suit to block the guidelines, which they said allowed many immigrants with criminal records to remain free while their cases moved forward, imposing burdens on the states’ justice systems and violating a federal law that they said made detentions mandatory.

Solicitor General Elizabeth B. Prelogar told the justices that the Department of Homeland Security must be able to set priorities. “There are more than 11 million removable noncitizens in this country, and D.H.S. has about 6,000 interior enforcement officers,” she said, adding that the federal government does not have the resources to apprehend and seek to deport all unauthorized immigrants.

A law that appeared to make some such actions mandatory by using the word “shall,” she said, was unworkable because Congress had not allocated the resources to allow the executive branch to pursue that vast undertaking.

But Chief Justice Roberts said the court’s role was limited. “It’s our job to say what the law is, not whether or not it can be possibly implemented or whether there are difficulties there,” he said. “And I don’t think we should change that responsibility just because Congress and the executive can’t agree on something that’s possible to address this problem.”

Ms. Prelogar urged the chief justice to consider the implications of that position. “If this court were to actually adopt that interpretation of the statute,” she said, “then I think that it would be incredibly destabilizing on the ground.”

In June, Judge Drew B. Tipton of the Federal District Court in Victoria, Texas, issued a ruling that blocked the use of the guidelines throughout the nation. A unanimous three-judge panel of the U.S. Court of Appeals for the Fifth Circuit, in New Orleans, refused to stay the ruling.

The administration filed an emergency application asking the Supreme Court to block Judge Tipton’s ruling. In a brief order in July, the court refused by a 5-to-4 vote. But the justices agreed to put the case on a fast track.

The issue the justices considered on Tuesday fell into three broad categories: whether states had suffered the sort of injuries that gave them standing to sue; whether the guidelines were lawful; and what should happen if the court ruled that they were not. The justices were divided on all three questions.

Justice Kagan said the court should be wary of letting states sue over minor and speculative injuries. “We’re just going to be in a situation where every administration is confronted by suits by states that can, you know, bring a policy to a dead halt, to a dead stop, by just showing a dollar’s worth of costs.”

In a separate but nearly identical case brought by three other states — Arizona, Montana and Ohio — a unanimous three-judge panel of the Sixth Circuit, in Cincinnati, refused in July to block the guidelines.

Chief Judge Jeffrey S. Sutton, writing for the panel, said the guidelines were in keeping with the approaches of previous administrations. “Federal law gives the national government considerable authority over immigration policy,” he wrote.

On Tuesday, Ms. Prelogar said the conflicting rulings showed that the federal government had to “run the table” when its programs were challenged. She urged the justices to use the case to curb suits from states challenging federal policies.

Ms. Prelogar encountered fierce criticism from the bench over her argument that federal trial judges should not be permitted to vacate agencies’ programs on administrative-law grounds.

Chief Justice Roberts, who once served on the U.S. Court of Appeals for the District of Columbia Circuit, told Ms. Prelogar that her position “sounded to me to be fairly radical and inconsistent with” what judges on that court do “five times before breakfast.”

When she pursued the argument, the chief justice said, “Wow.”

Two other alumni of the D.C. Circuit, Justice Kavanaugh and Justice Ketanji Brown Jackson, also indicated that they were deeply skeptical of the argument.

Judd E. Stone II, Texas’ solicitor general, said the state was concerned with “a small subset of the nation’s illegal immigrants,” saying that perhaps 60,000 or 80,000 people would be affected by the court’s ruling in the case, United States v. Texas, No. 22-58.

Chief Justice Roberts asked whether there were enough beds to detain even that many immigrants. Mr. Stone said no.

Ms. Prelogar urged the court not to adopt the approach Texas pressed. “That is a senseless way to run an immigration enforcement system, and it is not the statute that Congress enacted,” she said.