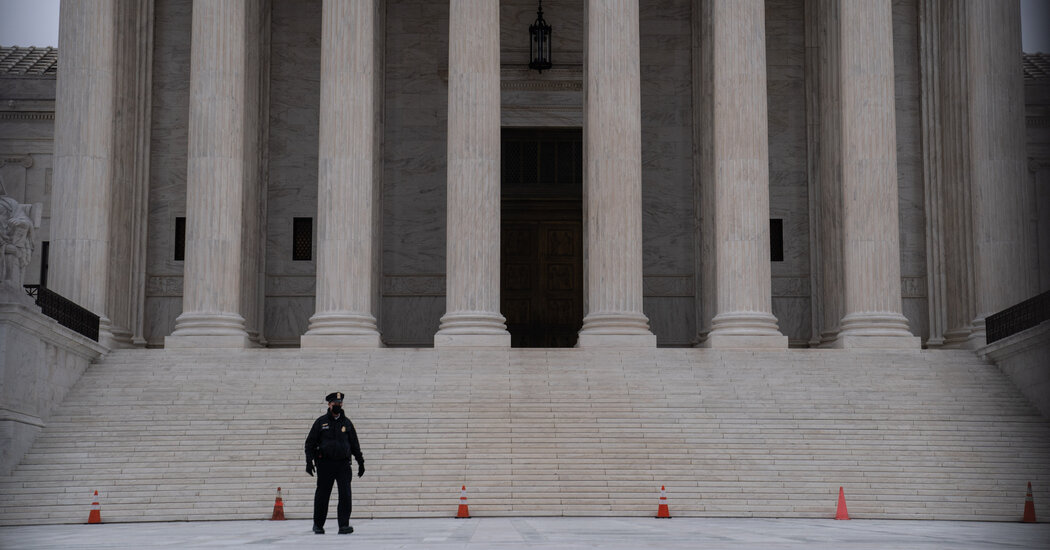 WASHINGTON — The Supreme Court has said that police officers do not need a warrant to enter a home when they are in “hot pursuit of a fleeing felon.” But the justices seemed puzzled, troubled and torn on Wednesday about whether the protection given to individuals in their homes by the Fourth Amendment also allows warrantless entries when officers pursue people suspected of crimes as minor as playing a car stereo too loudly.

“This is a tough case,” said Justice Stephen G. Breyer, adding that it presented the court with “a cruel trilemma.” He listed three possible resolutions and suggested that none was satisfactory.

A ruling that the hot pursuit of all crimes justifies entry, he said, means that “the home isn’t the castle at all for the most trivial of things.” On the other hand, he said, “hot pursuit is really serving an important purpose.”

The third alternative — drawing a distinction between felonies and misdemeanors — would create confusion and anomalies, he said.

The case concerned Arthur Lange, who had retired to Sonoma, Calif., after a career in commercial real estate. Driving home around 10 p.m. in the fall of 2016, with the windows down, loud music on and occasionally honking the car’s horn, he caught the attention of a state highway patrol officer.

The officer, Aaron Weikert, believing that Mr. Lange had committed noise infractions, followed him and, as he neared his home, activated the patrol car’s overhead lights.

Mr. Lange drove into his garage, and as its door began to descend, Officer Weikert stopped the door with his foot, forced it to reopen and confronted Mr. Lange, who appeared to be intoxicated. A blood test later showed that his blood-alcohol level was more than three times the legal limit.

Mr. Lange was charged with driving under the influence, a misdemeanor, and playing music too loudly, an infraction. He moved to suppress the evidence against him, arguing that Officer Weikert’s entry into his home had violated the Fourth Amendment, which prohibits unreasonable searches and seizures. A state appeals court ruled against him.

Jeffrey L. Fisher, a lawyer for Mr. Lange, said Officer Weikert had alternatives other than intruding into the garage, including knocking on the front door. “But if a homeowner in this situation insists,” Mr. Fisher said, “it is not too much to ask for officers to procure a warrant before breaching the Fourth Amendment’s most sacrosanct space.”

Chief Justice John G. Roberts Jr. said those options “really put the police in a dangerous situation.” Once inside their homes, he said, suspects can destroy evidence, arm themselves and summon confederates.

Mr. Lange said he had not seen the patrol car’s flashing lights, did not know he had been ordered to stop and so could not be said to be fleeing. Justice Samuel A. Alito Jr., who had reviewed video taken by Officer Weikert’s dashboard camera, said that appeared likely.

“The video shows there was no chase and Mr. Lange really didn’t flee,” Justice Alito said.

Justice Alito said the court could resolve the case by ruling that there had been no pursuit at all, hot or otherwise, regardless of whether the crime in question was a felony or a misdemeanor.

“The argument very simply is that hot pursuit has to be hot and it has to be a pursuit,” he said.

Justice Clarence Thomas, too, seemed reluctant to characterize the encounter in Sonoma as a hot pursuit. He called it a “meandering pursuit.”

Justice Neil M. Gorsuch, on the other hand, said he was not inclined to base the court’s ruling on “what makes a pursuit hot instead of limits on the seriousness of the suspected crime.”

Several justices said that line separating felonies from misdemeanors was a murky one that varied by state and did not reflect the risks to police officers.

Justice Elena Kagan said that labeling a crime a felony or a misdemeanor says little about whether the suspect was dangerous. Most domestic violence offenses are misdemeanors, she said, while most white-collar frauds are felonies.

In an unusual move, California did not defend the lower court’s decision in its favor and instead urged the Supreme Court to rule that only felonies justify entries without warrants.

Because neither side supported the appeals court’s ruling, the justices appointed Amanda K. Rice, a former law clerk to Justice Kagan, to argue that misdemeanors justify warrantless entries. Ms. Rice said the court should treat all crimes the same.

“The hot pursuit exception justifies warrantless home entry in a narrow class of cases where a suspect tries to thwart a lawful public arrest by outracing an officer to a dwelling,” she said.

Near the end of the argument, Justice Breyer said the case may not present a “cruel trilemma” after all. There was a fourth option, he said, which was “almost always” to allow warrantless entries in hot pursuit but to leave open the possibility that some intrusions are unreasonable.

That position resembled the one advanced by Erica L. Ross, who argued on behalf of the federal government in the case, Lange v. California, No. 20-18.