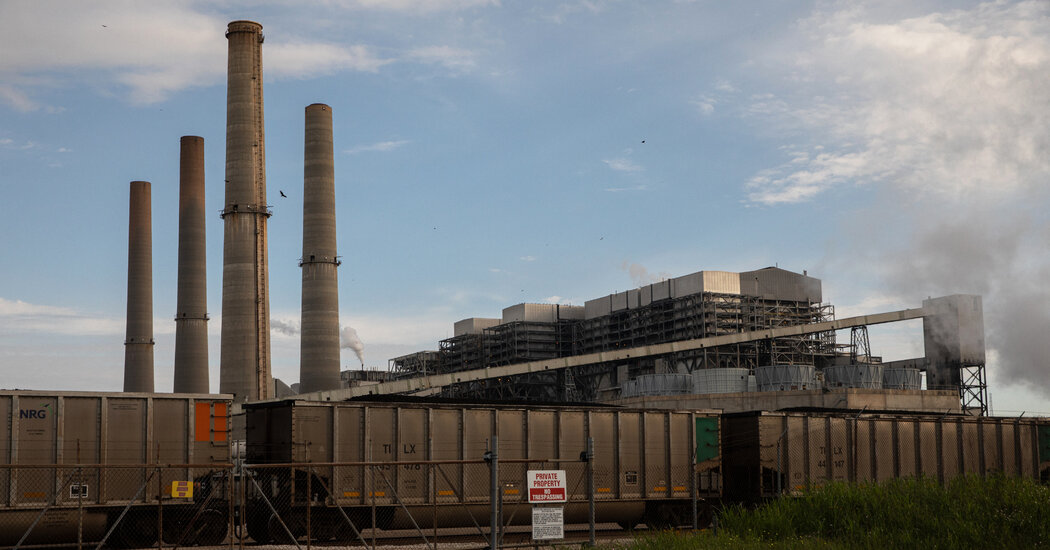 WASHINGTON — Members of the Supreme Court’s conservative majority on Monday questioned the scope of the Environmental Protection Agency’s ability to regulate carbon emissions from power plants, suggesting that the justices could deal a sharp blow to the Biden administration’s efforts to address climate change.

The questioning during the two-hour argument was mostly technical, and several conservative justices did not tip their hands. But those who did sounded skeptical that Congress had meant to give the agency what they said was vast power to set national economic policy.

Climate change was mentioned only in passing and only to buttress the point that an executive agency should not be allowed to tackle so large an issue without express congressional authorization.

A ruling against the E.P.A. would severely cut back on its ability to regulate the energy sector, limiting it to measures like emission controls at individual power plants and, absent legislation, ruling out more ambitious approaches like a cap-and-trade system at a time when experts are issuing increasingly dire warnings about the quickening pace of global warming.

But the implications of a ruling against the agency could extend well beyond environmental policy and further signal that the court’s newly expanded six-justice conservative majority is deeply skeptical of the power of administrative agencies to address major issues facing the nation and the planet.

That skepticism has been evident in recent rulings arising from the coronavirus pandemic. The court ruled, for instance, that the Centers for Disease Control and Prevention was not authorized to impose a moratorium on evictions and that the Occupational Safety and Health Administration was powerless to tell large employers to have their workers be vaccinated or undergo frequent testing.

On Monday, similarly, Justice Samuel A. Alito Jr. told a lawyer for the E.P.A. that he questioned whether the Clean Air Act “gives you the authority to set industrial policy and energy policy and balance such things as jobs, economic impact, the potentially catastrophic effects of climate change, as well as costs.”

He added a note of apparent skepticism about climate change, saying it is a phenomenon “which some people believe is a matter of civilizational survival.”

Solicitor General Elizabeth B. Prelogar, representing the E.P.A., responded that the court should not deny the agency “much-needed flexibility to do common sense and commonplace and well-established limits in this industry” for things like trading emissions credits.

She noted, too, that “the power plants by and large are on our side in this case,” in part because “they want that kind of flexibility because this is business as usual for them.”

Some justices seemed to think that the case was harder than earlier ones.

In the eviction moratorium case, Justice Amy Coney Barrett said, the question was whether “the C.D.C. can regulate the landlord-tenant relationship.”

“Here,” she said, “if we’re thinking about E.P.A. regulating greenhouse gases, well, there’s a match between the regulation and the agency’s wheelhouse, right?”

The justices appeared to have little appetite for an argument pressed by the Biden administration and environmental groups: that the four cases before the court were not ripe for decision because there is no regulation in place. They argued that the court should wait to address concrete questions rather than ruling on hypothetical ones.

Ms. Prelogar said the administration was at work on a new regulation, which the courts could consider after it was issued.

Chief Justice John G. Roberts Jr. and Justice Stephen G. Breyer indicated that they thought the Supreme Court did not need to wait. But Justice Neil M. Gorsuch said “the solicitor general makes a strong argument that states are not harmed here because, under the current state of affairs, there is no rule in place.”

Much of the argument was focused on whether the Clean Air Act allowed the agency to issue sweeping regulations across the power sector and, more broadly, on how clearly Congress must authorize executive agencies to address major political and economic questions for their regulations to be lawful.

The court has called this inquiry the “major questions doctrine.” The justices seemed divided over how it applied to the cases before them.

Jacob M. Roth, a lawyer for coal companies challenging the E.P.A.’s authority, said the key distinction was between regulating individual power plants and the entire energy sector. The latter, he said, was a major question that lacked congressional authorization.

He used an analogy based on setting fuel performance standards for cars to describe the limits of the E.P. A.’s discretion.

Lindsay S. See, West Virginia’s solicitor general, said the agency should not be permitted to regulate an entire industry.

“This is a major question,” she said, “because it allows E.P.A. to determine what the power sector as a whole should look like and who can be in it,” she said. “It transforms the statute from something that is about how a particular source can operate more efficiently.”

Last year, on the last full day of Donald J. Trump’s presidency, a federal appeals court in Washington struck down his administration’s plan to relax restrictions on greenhouse gas emissions from power plants. The Trump administration said the Clean Air Act unambiguously limited the measures the agency could use to those “that can be put into operation at a building, structure, facility or installation.”

A divided three-judge panel of the court, the U.S. Court of Appeals for the District of Columbia Circuit, ruled that the Trump administration’s plan, called the Affordable Clean Energy Rule, was based on a “fundamental misconstruction” of the relevant law, prompted by a “tortured series of misreadings.”

“The E.P.A. has ample discretion in carrying out its mandate,” the decision concluded. “But it may not shirk its responsibility by imagining new limitations that the plain language of the statute does not clearly require.”

The panel did not reinstate a 2015 Obama-era regulation, the Clean Power Plan, which would have forced utilities to move away from coal and toward renewable energy to reduce emissions. But it rejected the Trump administration’s attempt to replace that rule with what critics said was a toothless one.

The appeals court’s ruling also cleared the way for the Biden administration to issue stronger restrictions.

The Obama-era plan had aimed to cut emissions from the power sector by 32 percent by 2030 compared with 2005 levels. To do so, it instructed every state to draft plans to eliminate carbon emissions from power plants by phasing out coal and increasing the generation of renewable energy.

The Clean Power Plan never came into effect. It was blocked in 2016 by the Supreme Court, which effectively ruled that states did not have to comply with it until a barrage of lawsuits from conservative states and the coal industry had been resolved. That ruling, followed by changes in the Supreme Court’s membership that have moved it to the right, has made environmental groups wary of what the court might do in cases on climate change.

The Supreme Court heard the four cases, including West Virginia. v. Environmental Protection Agency, No. 20-1530, on the same day that a body of experts convened by the United Nations published the most comprehensive look to date at the threats posed by global warming. The report, approved by 195 governments, found that the dangers from climate change are bigger and unfolding faster than previously expected and that humanity may struggle to adapt to the consequences unless greenhouse gas emissions are quickly reduced in the next few decades.

“Any further delay in concerted anticipatory global action,” the report said, “will miss a brief and rapidly closing window of opportunity to secure a livable and sustainable future for all.”