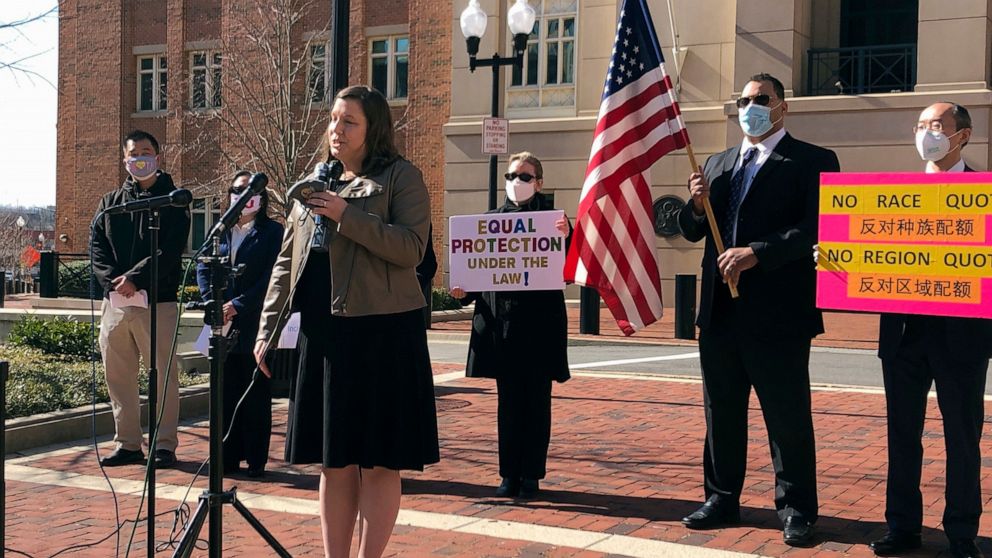 ALEXANDRIA, Va. — A federal judge ruled Friday that a parents’ group can move forward with a lawsuit alleging that new admissions policies at an elite public high school in northern Virginia discriminate against Asian Americans.

Thomas Jefferson High School for Science and Technology was rated the best public high school in the country last month by U.S. News and World Report. Asian Americans constitute more than 70 percent of the student body, and for decades Black and Hispanic students have been woefully underrepresented there.

The Fairfax County School Board, seeking to increase diversity at the school, drastically overhauled the admissions process at the school, scrapping a standardized test that had been the linchpin of the process. The new system now allocates slots at the highly competitive school in a system that distributes the vast majority of slots to the top 1.5 percent of students at each of the county’s middle schools.

School board members have said that increasing geographic diversity at the school should improve racial diversity. Other items that were seen as a barrier to Black and Hispanic families, including an application fee, have been eliminated.

Opponents of the changes say the new process will no longer attract the very best students to the school, and that the changes target Asian American families who prospered under the old system.

At a hearing Friday in U.S. District Court in Alexandria, lawyers for the Fairfax County School Board urged the judge to dismiss the lawsuit entirely.

Attorney Stuart Raphael said the new admissions policy is explicitly race-neutral and that admissions evaluators don’t even know the race of the applicants. And he said that under federal case law, a school board is within its rights to be motivated by a desire to increase opportunities for Black and Hispanic students, as long as they don’t show a specific intent to discriminate against Asian Americans.

But Erin Wilcox, an attorney for the Pacific Legal Foundation, which is representing the parent group Coalition for TJ, said the practical effect of changing policies to increase Black and Hispanic students is to necessarily reduce slots for Asian Americans.

“Everybody knows the policy is not race neutral, and that it’s designed to affect the racial composition of the school,” he said. “You can say all sorts of beautiful things while you’re doing others.”

While Hilton allowed the lawsuit to move forward to the next stage, he denied a request for an injunction that would have barred the school system from using the new policy for the incoming class of freshmen. He said it would be too disruptive to order a change at such a late date — Raphael said the school system is nearly completed with its review of applications for the upcoming fall semester, and that students will find out in June whether they have been admitted under the new process.

Julia McCaskill of Herndon, a Coalition for TJ member who has an eighth grader waiting for word on whether she’ll be accepted to TJ, said she was disappointed that the judge declined to issue an injunction. She said her Asian American daughter attends a middle school that has a large number of high-performing students and typically sends large numbers of students to TJ. With all but 100 of the 550 slots in the freshman class reserved for just the top 1.5 percent of students at each school, she said the new rules diminish her daughter’s chances of acceptance.

She said the school system needs to improve student performance at all of its schools, rather than imposing a rule requiring TJ to accept equal numbers of kids from each middle school.

“They need to bring up everybody to make it better,” she said.

The TJ admissions lawsuit reflects a national debate over admissions and racial composition of elite public high schools. Similar lawsuits and debates have emerged at top-tier schools in New York, California and elsewhere.