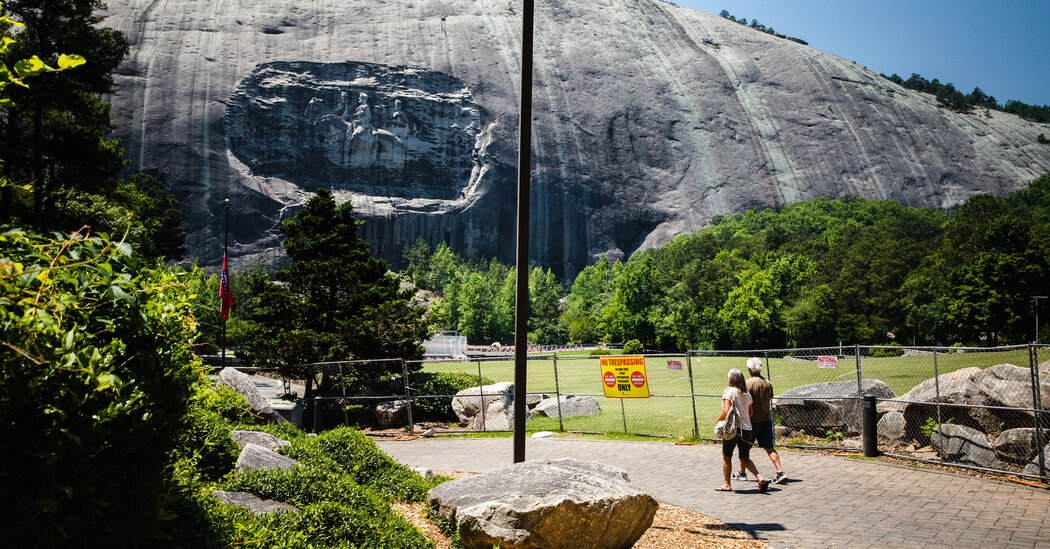 STONE MOUNTAIN, Ga. — The Confederate flags that have long flapped at the base of Stone Mountain, placed there by the United Daughters of the Confederacy, will be moved to a less prominent area, joining other relics of the Civil War. New exhibits will offer a fuller and more complicated description of the park’s history, attempting to reach beyond the war it memorializes to the role the Ku Klux Klan and resistance to desegregation played in its creation.

But the enormous monument at the center of the park — Jefferson Davis, Robert E. Lee and Stonewall Jackson carved into stone as a Confederate equivalent to Mount Rushmore — is not going anywhere.

Officials in Georgia voted on Monday to modernize Stone Mountain Park, prodded to update what has long been one of the state’s most popular tourist destinations as it confronts staggering financial losses and major vendors pulling out after the coronavirus pandemic and racial justice protests last year.

Yet the solution approved by the park’s governing board has frustrated critics on all sides. Activists who want to strip out, or at least try to downplay, the specter of the Confederacy over the park viewed it as a half-measure. Supporters of the monument have resisted any changes to what they see as a precious homage to their Southern heritage.

“All I know is, it’s important to tell the whole story,” Mr. Stephens said. “There’s plenty to be said, that most people don’t know.” He pointed to the Ku Klux Klan’s involvement in its creation as an example.

The division reflects a familiar tension in Georgia, which is wrestling with conflicting perceptions of itself as Democrats have made political strides in a deeply conservative state and the population has grown increasingly diverse.

“We’re at a point where the state is teetering on going one way or the other politically,” said Sheffield Hale, the president and chief executive of the Atlanta History Center, describing the demographic shifts and surge in political participation driving a “period of political flux.”

“The mountain is at the center of that,” he said.

The debate has also illuminated limitations of the broader efforts to dismantle the symbols of the Confederacy that have endured for generations across the South. Monuments to Confederate leaders were toppled and names were stripped from buildings amid the protests and reckoning over race that erupted across the country last year after George Floyd was killed by the Minneapolis police.

But efforts to take on the Stone Mountain memorial were stymied by legal constraints and the logistics of taking down a monument that is 90 feet tall, 190 feet across and covers roughly three acres on the side of a mountain. (Removing it would most likely require years and lots of explosives.)

The idea for the sculpture — one of the largest bas-relief carvings in the world — emerged in 1914, portrayed as a massive memorial to the Lost Cause, or the notion that the South was defending more than just slavery in the Civil War.

The effort took decades to complete. It stalled during the Great Depression but picked up new momentum in 1954 as Marvin Griffin, a candidate for governor riding the outcry following the Brown v. Board of Education ruling, promised to uphold segregation and finish the monument. (The park is owned by the state.)

Critics and historians said that racist anger, more than heartache over Confederate bloodshed, fueled the monument’s creation. “They have the wrong people on the mountain,” Mr. Hale said, suggesting that it might have been more accurate to depict segregationist politicians instead of Confederate leaders. “This mountain is about massive resistance to desegregation. It’s not about the Civil War.”

The park has long been one of the most popular destinations in the state, but it has seen a precipitous drop in revenue, losing $27 million between 2019 and 2020. Marriott, which operates the hotel and conference center on the park’s grounds, has said it was pulling out.

The movement by the park’s governing board has underscored the crucial role that economic factors have had in motivating change. In Mississippi, the threat of canceled sporting events and souring business investment ignited the final effort to bring down the state flag featuring the Confederate battle emblem, which had flown for 126 years and weathered many previous attempts.

But supporters of the monument contend that its history can be a force for reinvestment. “We’re in favor of ‘heritage tourism,’” said Martin K. O’Toole, a spokesman for the Georgia division of the Sons of Confederate Veterans, comparing it to colonial tourist sites.

“The carvings memorialize the people who served the Confederacy,” Mr. O’Toole said. “You can admire people like Robert E. Lee and not be in favor of segregation.”

He said that legal protections limited the actions of park officials. But activists contend that the board had ample room to move more aggressively.

Stone Mountain Park, with 3,200 acres of walking trails, lakes and amusement rides, officially opened to the public on April 14, 1965 — the hundredth anniversary of the night President Abraham Lincoln was shot.

“The natural surroundings are amazing,” said Bona Allen, who can trace his heritage back to the Confederacy and has become a leader in the effort to minimize that history in the park. “It’s just marred by the ugliness of the Confederacy.”

Beyond the sculpture, the park is packed with references to the Confederacy: There are boulevards named for Robert E. Lee and Stonewall Jackson and a drive named for Confederate war heroes. State law says that the park’s overseers “shall continue the practice of stocking, restocking, and sales of Confederate memorabilia.”

Some visitors to the park on Monday expressed concerns about scrubbing away history. Joe Aronoski, 82, had just taken a tram to the carving and the top of Stone Mountain for the first time. “It’s American history,” said Mr. Aronoski, who was visiting from Fall River, Mass. “It shouldn’t be destroyed. What are you going to do? Make-believe the Civil War didn’t happen?”

The park has been a focal point in Georgia’s political tensions. Far-right activists and white supremacist militia group were barred last summer from gathering there.

But its location also reflects the way Georgia has pulled away from that past: It is less than 20 miles from Atlanta, the home of the civil rights movement and a hub for the state’s explosive and diverse growth. Civil War history is not what draws many to the park.

“Sad to say, you get used to it,” Jewel Minter, who is Black, said of the troubling legacy that looms over the park. Superficial tweaks to the park, she said, would not lead to the substantial societal changes that she believes are necessary. “You can put Frederick Douglass, Martin Luther King up there,” she said. “What is that going to do about how we’re still not getting what we need?”

Still, it was not enough to discourage her from coming with her cousin after finishing a dance class.

“It’s beautiful,” Ms. Minter said as she sat in the shade eating lunch, referring to the bright sky and lush, tree-covered hills that brought her to the park and paying no mind to the Confederate leaders on horseback etched into the mountain behind her.