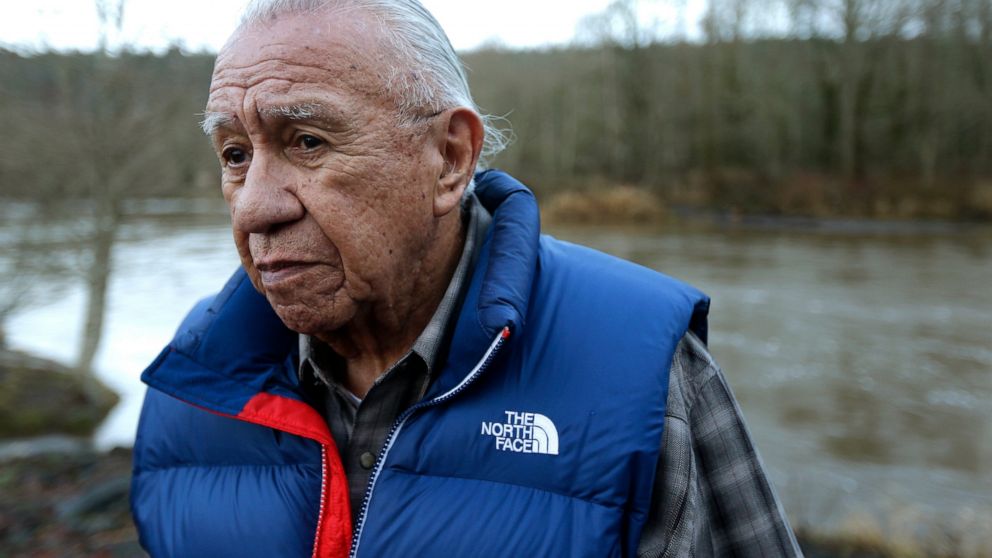 Washington Gov. Jay Inslee has signed a measure that starts the process of honoring the late Billy Frank Jr. with a statue at the U.S. Capitol

OLYMPIA, Wash. — Washington Gov. Jay Inslee on Wednesday signed a measure that starts the process of honoring the late Billy Frank Jr — a Nisqually tribal member who championed treaty rights and protecting the environment — with a statue at the U.S. Capitol.

Inslee signed the measure at Wa He Lut Indian School in the Nisqually community north of Olympia, joined by Nisqually tribal leaders.

The measure, which was overwhelmingly approved by the Legislature with bipartisan support, starts the legal process to replace Washington’s Marcus Whitman statue in the National Statuary Hall Collection with a statue of Frank, who died in 2014 at age 83.

Frank was first arrested for salmon fishing as a boy in 1945 — an event that led him on a long campaign for tribal rights. He and others were repeatedly arrested as they staged “fish ins” demanding the right to fish in their historical waters, as they were guaranteed in treaties when they ceded land to white settlers in the 19th century. Frank was jailed more than 50 times.

The efforts were vindicated in 1974, when U.S. District Judge George Boldt affirmed the tribes’ right to half of the fish harvest — and the nation’s obligation to honor the old treaties.

Over the next 40 years, Frank continued to advocate for tribal fishing rights and the protection of natural resources, including salmon.

The National Statuary Hall Collection features 100 statues, with each state contributing statues of two notable deceased residents. Washington’s current honorees are Whitman, an Oregon Trail pioneer and missionary, and Mother Joseph, a Catholic nun who founded hospitals and schools after arriving in the state from Canada in the mid-1800s.

Under the measure, Inslee must write to the Joint Committee of Congress on the Library by Sept. 30 to request they remove the Whitman statue and replace it with a statue of Frank. The Billy Frank Jr. National Statuary Hall Selection Committee — created under the bill passed by the Legislature — will act on behalf of the state in carrying out the replacement process.

The measure also requires the governor to coordinate with Walla Walla County, the site of the Whitman Mission established by Marcus Whitman, to carry out the relocation and transfer of ownership of the Whitman statue.

Democratic Rep. Debra Lekanoff, the sponsor of the measure and an Alaska Native who is Tlingit and Aleut, told those gathered for the bill signing that Frank, Jr. will stand in Washington, D.C., among other great leaders “as the great man that he is.”