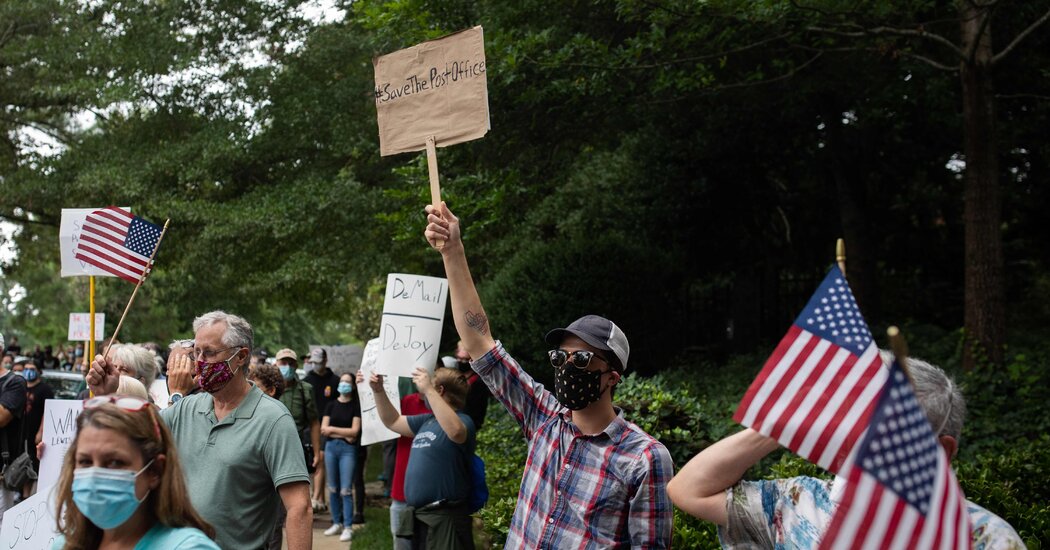 Six states and the District of Columbia sued the Postal Service and the postmaster general on Friday, alleging that recent operational and policy changes were illegal and “designed to undermine” the agency’s ability to operate effectively as millions of Americans plan to vote by mail during the pandemic.

The lawsuit was announced as Postmaster General Louis DeJoy testified before a Senate committee about the operation and integrity of the Postal Service.

Facing backlash over concerns that cost-cutting measures were slowing the mail and could imperil the November election, Mr. DeJoy had announced on Tuesday that the Postal Service would suspend operational changes until after the election.

But in announcing Friday’s lawsuit, Josh Shapiro, the Pennsylvania attorney general, asserted that Mr. DeJoy had not addressed some of the lawsuit’s core concerns and called for “detailed information” on how the agency would reverse what he said were “illegal changes.”

“Pres Trump and Postmaster DeJoy might say they’re backing down but, in CA, we’re not going to take their word for it,” Xavier Becerra, the attorney general of California, one of the six states suing Mr. DeJoy, wrote on Twitter.

Friday’s lawsuit — filed in federal court in Allentown, Pa., by Pennsylvania, California, Delaware, Maine, Massachusetts, North Carolina and the District of Columbia — argues that the changes at the Postal Service impede state efforts “to conduct free and fair elections in the manner plaintiff states have chosen.”

The complaint says that as undelivered mail and packages have piled up, dead animals and rotting food have been left inside mail processing plants, state pension checks in Delaware have been delayed, and medication deliveries in rural North Carolina have run two weeks late. In California, a 77-year-old woman with asthma complained of not receiving her inhaler for three weeks, when it usually would have been delivered in three to five days.

It was the latest in a series of lawsuits that have included another one filed jointly by 14 states and others filed by the N.A.A.C.P. and the National Urban League.

Asked for comment about Friday’s lawsuit, a spokesman for the Postal Service referred to Mr. DeJoy’s written and oral testimony at Friday’s hearing, in which he said he was “fully committed to preserving and protecting the Postal Service’s proud tradition of serving the American public in a nonpartisan fashion.”