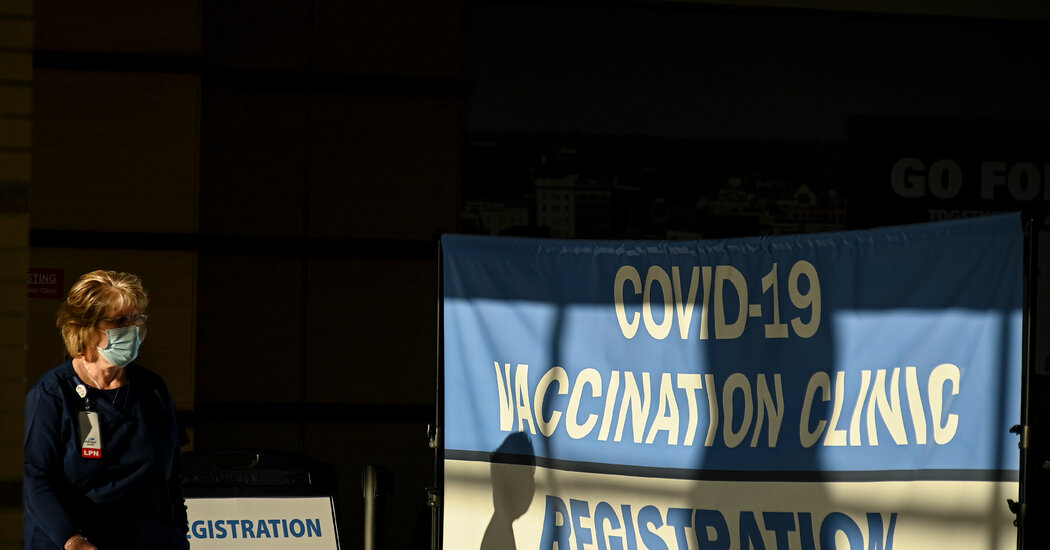 CHICAGO — As Americans shed masks and return to offices and restaurants, local and state officials are scaling back the most visible public health efforts to address the coronavirus pandemic.

States like Illinois are shuttering free Covid-19 testing sites after nearly two years of operation. Arizona, Nevada, Hawaii and Ohio have stopped releasing daily data on virus hospitalizations, infections and deaths. And, perhaps most notably, some places are diminishing their campaigns to vaccinate residents even as federal authorities announced on Tuesday that people 50 and older could get a second booster shot.

The slowing of state and local efforts comes as the virus in the United States appears, at least for now, to be in retreat, with cases falling swiftly in recent weeks.

But the cutbacks also arrive at a moment when a more transmissible version of the Omicron variant of the coronavirus, known as BA.2, is spreading through Europe, Asia and is now the dominant version of new virus cases in the United States. New coronavirus infections are edging upward once again in several states, including New York.

If another surge in the pandemic is ahead, public health officials said, it could be a challenge to quickly ramp up the vaccination and testing sites and other measures that are now being shut down.

“We have to be cautious in how we move forward,” said Dr. Ben Weston, chief health policy adviser for Milwaukee County, Wis., where he has kept vaccine clinics open. “Imagine that we’re a boat at sea and we just got off the largest tidal wave we’ve ever been on. It would be a strange time to throw out the life jackets.”

Some health officials said that they were merely shifting their efforts in the face of dwindling demand for both Covid tests and vaccines, with fewer than 225,000 shots administered across the country each day.

Dr. Allison Arwady, Chicago’s top health official, said that two popular vaccination initiatives — a $50 gift card incentive and a program to vaccinate Chicagoans in their homes any day of the week — would be pared down in April.

“It’s definitely the time to be pulling back on some resources,” Dr. Arwady said. Demand for vaccines has waned, she explained, and she is trying to save money as she anticipates cuts in federal funding because of an impasse in Washington over Covid spending.

In San Antonio, with a majority of residents already immunized and case numbers at a low, demand for vaccines at the mass site outside the city’s Alamodome has dropped, said Miguel Cervantes, the city’s public health administrator. The site closed on Friday after 15 months of continuous operation and more than 200,000 Covid-19 vaccine doses. At its peak, it administered roughly 3,500 vaccinations a day. Last week, it averaged fewer than 50.

“We haven’t seen the numbers to support a need for a site,” Mr. Cervantes said.

The high price of maintaining the site’s staffing and equipment is a less cost-effective use of those resources than smaller, community-based events, he added. And with the 64,000-seat Alamodome stadium now hosting a full slate of sports and concerts, the parking lot has returned to its prepandemic use.

“If people aren’t walking in the door, it burns a lot of cash to have a fully staffed testing center,” said Andrew Noymer, a public health professor at the University of California, Irvine. “So I can understand why states and localities are closing them. We’re going to have to find a way to be flexible.”

Federal dollars for the Covid pandemic have been dwindling in recent days, as a fund designated to reimburse tests and treatment for the uninsured is no longer accepting claims. State and local officials, alarmed by debates in Washington over the future of Covid funding, have anticipated that they will face tighter budgets in the near future if federal funds are cut.

Targeted, community-based events are more effective at reaching those who remain unvaccinated, said Dr. Desmar Walkes, medical director for the city of Austin, which has shut down all but one of its mass vaccination sites.

“We’re at that point where the one-on-one conversations and having the ability to have community partners go in and educate on the safety of vaccine and answer questions is giving us a little better acceptance,” Dr. Walkes said. Her department is seeing a higher rate of uptake through mobile clinics at long-term care facilities, schools, workplaces and even soccer games than at mass vaccination sites, she said.

If demand for vaccines, testing and treatment increases amid a looming wave of the BA.2 subvariant, health officials say, they can easily restart these programs. It would take just a few days to do so in Austin, Dr. Walkes said.

But some experts expressed doubt that resuming operations at testing and treatment sites could happen as quickly as needed in the event of a surge.

Adriane Casalotti, the chief of government and public affairs for the National Association of County and City Health Officials, said that during lulls when cases are low, health departments could be taking the time to plan and prepare for what is next. Shuttering larger-scale efforts like testing sites follows a certain logic — but leaves a community vulnerable.

“In a situation where you don’t have long testing lines, people think, we can get rid of this testing site,” she said. “That might work for this week and next week, but ramping something like that back up — if the situation changes on the ground — is really hard.”

Public health experts worry that Americans have moved on from the pandemic before it is over and that the United States could be unprepared for another wave. The virus is still causing the deaths of more than 700 Americans each day.

“We’re in this phase of the pandemic where we’re transitioning,” said Aubree Gordon, an infectious disease epidemiologist at the University of Michigan. “It’s still really critical that testing is readily available — you can’t know what’s going on if you’re not looking at it.”

At the same time that vaccination and testing efforts are falling increasingly on community health centers and local clinics, these providers are seeing their funding disappear. For months, Kintegra Health, which operates health centers across central North Carolina, has relied on money from the Health Resources & Services Administration. A federal program, it provides reimbursements for Covid-19 testing, treatment and vaccine administration for uninsured patients, facilitating thousands of tests and vaccinations a day, primarily in mobile clinics.

But officials said that program would stop accepting claims because of lack of funding, forcing the health center to halt its mobile clinics.

“I’m concerned about what’s next, because when I shut it down and all these people go find other jobs and the next variant comes along, will I be ready?” said Robert Spencer, chief executive of Kintegra Health.

In many states, services that local and state governments administered are shifting to traditional health care providers.

By mid-April, pharmacies and health care providers will deliver all vaccines in Vermont as the state government winds down its vaccine sites. Demand for vaccines from the state-run sites has plummeted by 77 percent in the last 30 days. The only providers that reported a modest uptick in vaccinations were primary-care offices.

In Vermont, the state has also transitioned its state-run testing sites primarily into distribution centers for rapid at-home tests, rather than PCR tests. That means that the state has a blurrier picture of the number of Covid cases, but Dr. Levine said state health officials had already moved away from focusing on case counts, relying instead on wastewater surveillance and genome sequencing to keep track of the virus.

The state still posts a report of new daily Covid cases five days a week on its website but is planning to soon follow the lead of many other states in posting a weekly report instead.

Many states have switched to weekly from daily reporting of new cases on public dashboards. Officials say it is time-intensive to publicly update data every day and that daily variation in the data makes it less meaningful than weekly reports. Instead, some are releasing it on public dashboards only once a week, in keeping with reports on other ailments, like the flu.

In Chicago, Dr. Arwady said the city was still trying to vaccinate every Chicagoan — keeping its at-home vaccine option open four days a week instead of seven, telephoning residents who are eligible for boosters and tracing contacts in high-risk settings such as prisons and nursing homes.

Even at a time when Covid infections are low, she worries that cuts in federal funding could be detrimental in the long run and threaten the country’s ability to face future surges of the pandemic.

“I am concerned about this idea that ‘Covid’s over, we can stop funding public health,’” she said. “That will put us right back where we were.”