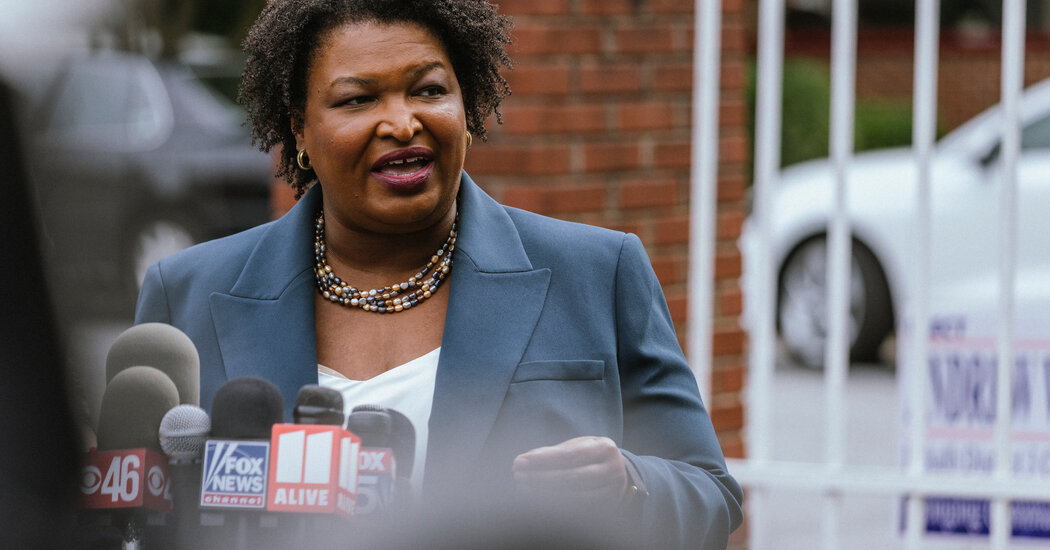 ATLANTA — When Teaniese Davis heard that Stacey Abrams was holding a public event on Tuesday morning, she raced to a church parking lot teeming with two dozen cameras and members of the news media, hoping to catch a glimpse of one of Georgia’s most famous Democrats.

“People know who she is,” Ms. Davis, who works in public health research, said of her state’s Democratic nominee for governor. “A lot of people are bought into who she is.”

Republicans are bought into Ms. Abrams, too. Even as they fought among themselves in vigorous primary battles, Ms. Abrams has featured prominently in G.O.P. ads and debates as a potent symbol of the threat of Democratic ascendance in the state.

Now, as Ms. Abrams hurtles into a general election against Gov. Brian Kemp in what will be among the most closely watched governors’ races in the nation, her candidacy will offer a vivid test of a significant question facing Democratic candidates this year. To what extent can clearly defined, distinctive personal brands withstand the staggering headwinds facing the Democratic Party, as Republicans seek to nationalize the midterm campaigns at every turn?

Ms. Abrams and Mr. Kemp are technically in a rematch, but their race is unfolding in a vastly different political climate compared with 2018, when Ms. Abrams electrified Democrats as she vied to become the country’s first Black female governor. Ms. Abrams cemented her status as a national star even in narrow defeat, while her party, buoyed by opposition to former President Donald J. Trump, went on to retake the House of Representatives. Roughly two years later, Georgia helped deliver the presidency and then the Senate majority to the Democrats, an emphatic break with the state’s longtime standing as a Republican bastion, and Ms. Abrams was widely credited with helping to flip the state.

Now, President Biden’s approval rating is a drag on Democrats like Ms. Abrams, inflation has soared, Mr. Kemp is an entrenched incumbent and Mr. Trump is not on the ballot. Ms. Abrams isn’t just a galvanizing force for Democrats, she has become a common enemy for Republicans trying to unite their party after divisive primaries.

That primary competition helped drive up turnout for Republicans on Tuesday. Roughly 1.2 million people voted in the G.O.P. primary for governor, compared with 708,000 people who voted for Ms. Abrams, who was unopposed. Both of those numbers are up from 2018, the last midterm primary, but Republican participation doubled.

“We’re definitely seeing the enthusiasm on the Republican side,” said Jacquelyn Bettadapur, the chairwoman of the Cobb County Democratic Committee. Ms. Bettadapur said she sees a role reversal for the parties. After losing the White House in 2016, Democrats were motivated to stage a comeback.

“It was a real sort of kick in the pants to get the Democrats engaged and mobilized, which we did,” she said, adding that Republicans are now “in that same situation.”

After the Georgia Primary Election

The May 24 races were among the most consequential so far of the 2022 midterm cycle.

Ms. Bettadapur stressed that Democrats, too, were motivated, singling out the Supreme Court’s possible overturning of Roe v. Wade as a potentially galvanizing force. The state has a law, signed by Mr. Kemp and poised to take effect if Roe is overturned, that prohibits abortions after about six weeks from conception. Ms. Bettadapur also noted, in an interview before the deadly Texas elementary school shooting on Tuesday, that Mr. Kemp’s moves to loosen gun restrictions might be off-putting to many Georgia voters.

Ms. Abrams’s campaign on Wednesday hit Mr. Kemp for his record on guns in a statement, calling attention to a 2018 campaign ad in which Mr. Kemp holds a shotgun in his lap and asks a teenager who wants to court his daughter to recite his campaign platform.

“Years from now, Kemp will be remembered as a one-term governor who pointed a gun at a boy on television,” said Lauren Groh-Wargo, Ms. Abrams’s campaign manager.

Hundreds of Mr. Kemp’s supporters packed into the College Football Hall of Fame on Tuesday night to celebrate his victory. In his speech accepting the party’s nomination, Mr. Kemp encouraged his supporters to organize, asking all of them to make phone calls and knock doors “like we’ve never knocked before” heading into November. His goal, he said, is not only to be re-elected but also to stunt Ms. Abrams’s political future.

“You can see the choice on the ballot this November is crystal clear,” he told the crowd amid shouts of “four more years!” from some. “Stacey Abrams’s far-left campaign for governor in 2022 is only a warm-up for her presidential run in 2024.”

Ms. Abrams’s campaign declined to comment on Mr. Kemp’s remarks, but a spokesman confirmed that she intended to serve a full term as governor if elected.

Ms. Abrams, the former minority leader in the Georgia statehouse, has been particularly focused on engaging more Black, Hispanic and Asian American voters in an increasingly diverse state. The party has used Georgia’s ballooning population as a springboard to those efforts — census data shows that more than one million people moved to the state between 2010 and 2020, with most in deep-blue Metro Atlanta counties.

“Clearly they have signed up a lot of new folks over the past four years and you have to give it your hand to them for what they’ve done there,” said Saxby Chambliss, a former Georgia senator, even as he stressed that “if Republicans get out and vote, we’re a red state.”

Among Ms. Abrams’s new challenges this year is building a case against the governor while his approval rating hovers around 50 percent. An Atlanta Journal-Constitution poll from January found that Georgians were more optimistic about the direction of the state than that of the nation.

In a recent speech, Ms. Abrams cited Georgia’s maternal health, gun violence and health-insurance rates. “I am tired of hearing about being the best state in the country to do business when we are the worst state in the country to live,” she said over the weekend, a remark she later defended as an “inelegant delivery of a statement that I will keep making: and that is that Brian Kemp is a failed governor.”

Mr. Kemp seized on the comments to cast himself as a Georgia booster and declared “that is why we are in a fight for the soul of our state.”

In her first video of the general election, Ms. Abrams seemed to acknowledge the remark. “I’m going to work hard, but I’m going to make mistakes,” she said. “But what will remain constant is my commitment to you.”

Democrats hope Republicans will struggle to unite after an exceptionally divisive primary in which Mr. Trump endorsed Mr. Kemp’s opponent, former Senator David Perdue — who leveled racist criticism against Ms. Abrams in the final gasp of his campaign on Monday. On Tuesday, after a blowout loss, Mr. Perdue said that “everything I said about Brian Kemp was true” while still calling Mr. Kemp a “much better choice” than Ms. Abrams.

“There are going to be national headwinds, there always are,” Ms. Abrams acknowledged on Tuesday morning at a news conference. She expressed confidence that voters of color, in particular, would turn out in November, but added, “It’s my responsibility to give them a reason to vote. And part of my goal is to make certain they know that I see all of them, I hear them and I will represent all of Georgia.”

National Democrats, too, remain engaged around her race: She had a fund-raiser in New York City scheduled for Wednesday, effectively the first day of her general election campaign.

“A Stacey victory in Georgia is going to cement Georgia not just as a battleground but as the progressive New South,” said Michael Blake, a former vice chairman of the Democratic National Committee and a co-host of the fund-raiser.

Republicans, however, are just as eager to highlight Ms. Abrams’s ties to the national party, and to cast her as too far left for the state.

Those arguments about Democrats are compelling to voters like Cindy and Tom Caragher.

The couple voted on Tuesday for Mr. Kemp, they said, standing outside Shakerag Elementary School, in the wealthy and ethnically diverse Atlanta suburb of Johns Creek — their first time ever voting Republican, they said.

“We’ve been pretty moderate centrists forever, and I just feel like the leftists have dragged the party beyond what we can deal with,” Ms. Caragher, a 51-year-old educator, said.

Georgia Republicans have made Ms. Abrams, specifically, the center of their attack ads and stump speeches from the early days of the primary campaign. Beyond the governor’s race, Republican candidates for secretary of state and lieutenant governor have invoked Ms. Abrams to attack their opponents or underline their own conservative records. Several Republican leaders, once wary of internal divisions in the party after the 2020 election, see Ms. Abrams as a galvanizing force.

“I think you’re going to see Republicans up and down the ballot and all over the country united,” Mr. Kemp said in a news conference with reporters before the primary election. “They know that Stacey Abrams will go, if not the way of Joe Biden, even further to the left of that.”

Ms. Bettadapur, the chairwoman of the Cobb County Democrats, had no doubt that Republicans would seek to paint Democrats as extremists.

Ms. Abrams’s task, she said, entails getting her own messaging out — “and sort of creating her own path.”