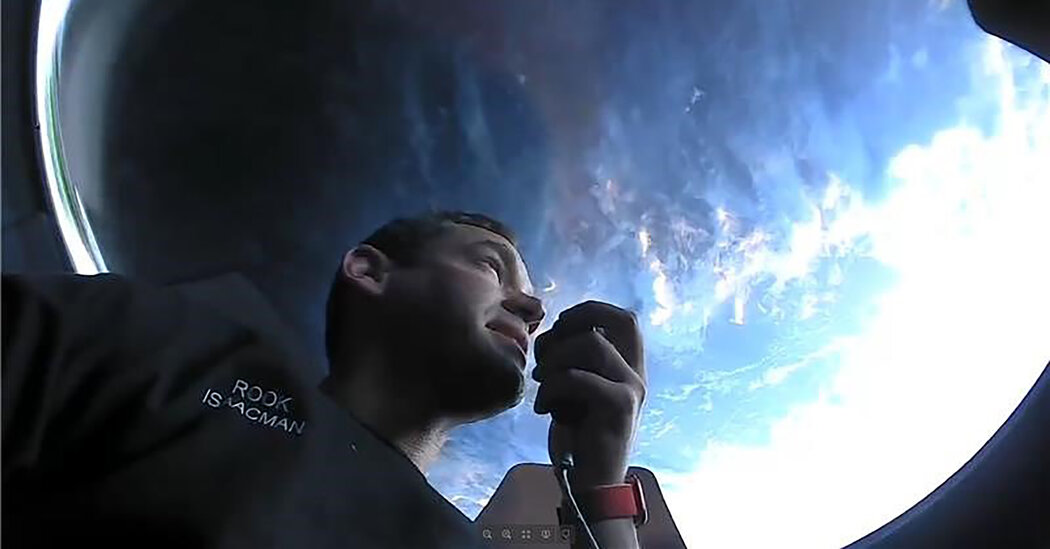 The astronauts on the Inspiration4 mission finally gave people on Earth a good look through their cupola on Friday. That’s a fancy word for dome.

The Crew Dragon capsule that the Inspiration4 crew is traveling in has one, and it’s a special cupola, 46 inches in diameter and 18 inches high. It includes a single piece of glass. With a viewing area of more than 2,000 square inches, it is the largest contiguous window ever flown to space.

On the three previous Crew Dragon trips to space, the capsules did not have a cupola, because those earlier missions, for NASA, docked at the International Space Station. But the Inspiration4 mission is simply circling the Earth, so there was no need for docking. SpaceX engineers came up with the idea of taking off the adapter and replacing it with a glass cupola, which would make the capsule more roomy.

They turned that idea into a piece of hardware that is now flying in space in about half a year. They refined the concept, explored different materials, built it and then tested it to make sure it wouldn’t crack or leak in space.

Just the greater interior space could conceivably have changed thermal and structural properties of the rest of the spacecraft, so engineers made sure that no such issues arose.

“All those little details,” Mr. Reed said. “But you do the same thing for any new component or any new substance that you put on Dragon.”

The International Space Station also has a cupola, and it is bigger than the one that the Inspiration4 crew is looking out of. But the one on the space station consists of several panes within a metal frame.

The continuous glass of the Crew Dragon cupola provides an unobstructed view.

In an Axios podcast about the mission, Jared Isaacman, the billionaire who leads Inspiration4, said the first time he looked out of it, when it was still on the ground at SpaceX headquarters in California, the effect was surprising.

“What I didn’t expect is, I couldn’t see, like, the glass,” Mr. Isaacman said.

That is, it was almost like sticking one’s head into the outer space.

“It felt like something that you would have to adjust to,” Mr. Isaacman said. “And that’s why I kind of told the crew, like, let’s not underestimate our body’s reaction to this.”

From the images released of the Inspiration4 astronauts in space, it appears that their reaction has been elation.

“I hope you’re getting to see what we see,” said Hayley Arceneaux, the mission’s medical director, in a recording of a video chat she held with patients from St. Jude, the pediatric cancer treatment hospital where she works.