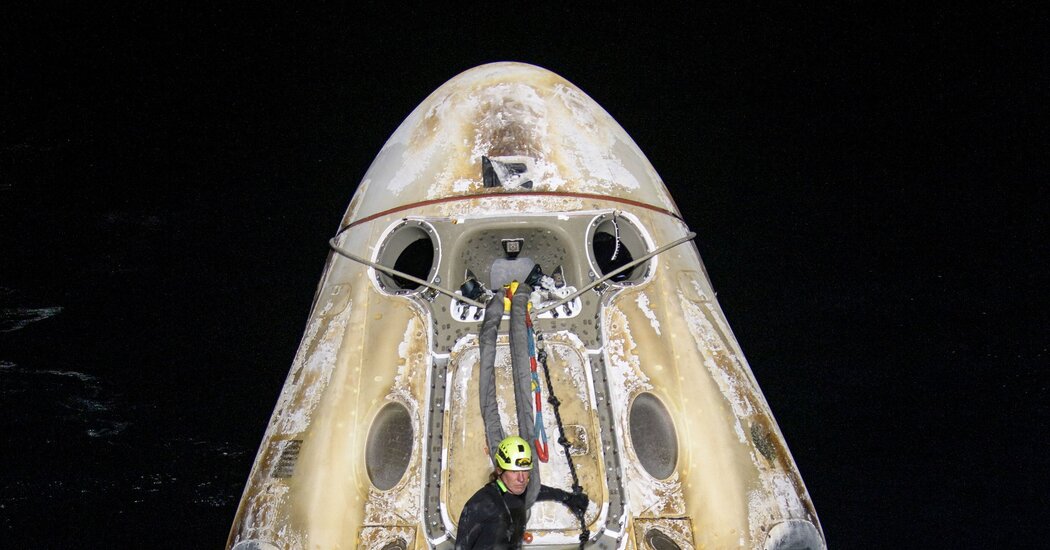 Returning from the free-fall environment of orbit to the normal forces of gravity on Earth is often disorienting for astronauts. A water landing adds the possibility of seasickness.

During a news conference in 2020, Doug Hurley, who flew NASA’s first journey in the Crew Dragon capsule said he had read some of the reports by the Skylab astronauts.

“There was some challenges post splashdown,” he said. “Folks didn’t feel well, and you know, that is the way it is with a water landing, even if you’re not deconditioned like we’re going to be.”

Mr. Hurley acknowledged that vomiting would not be unexpected.

“There are bags if you need them, and we’ll have those handy,” he said. “We’ll probably have some towels handy as well. And you know, if that needs to happen, it certainly wouldn’t be the first time that that’s happened in a space vehicle.”

But not long after the splash down, he asked SpaceX’s mission controllers to tell flight surgeons monitoring their health that, “we’re doing pretty good so far.”

The crew will also be returning minutes before sunset on Saturday. SpaceX’s last astronaut splash down in May occurred in the dark, and it was the first night water landing by astronauts since 1968.

Steve Stich, manager for NASA’s Commercial Crew program, said that consistently calm nighttime weather at the splash down site, ample moonlight and additional factors made landing in the dark advantageous.

“When we weighed all those options, it just looked like this was the best time to come home,” he said on NASA TV earlier in the year.

Another advantage of a nighttime landing could be that fewer private boats are likely to be around. That was a problem in August 2020 when the first crewed SpaceX capsule splashed down. More than a dozen boats — one of them flying a Trump campaign flag — converged on the singed capsule, and a few went in for a closer look.

The episode raised concerns among NASA and SpaceX officials about security and safety procedures. If there had been an emergency, NASA officials said, the private boats might have impeded recovery efforts. They added that there could have been poisonous fumes from the capsule that posed a risk to the boaters.

With that concern in mind in May, the Coast Guard set up an 11.5-mile safety zone around the splashdown site to chase away any interlopers.