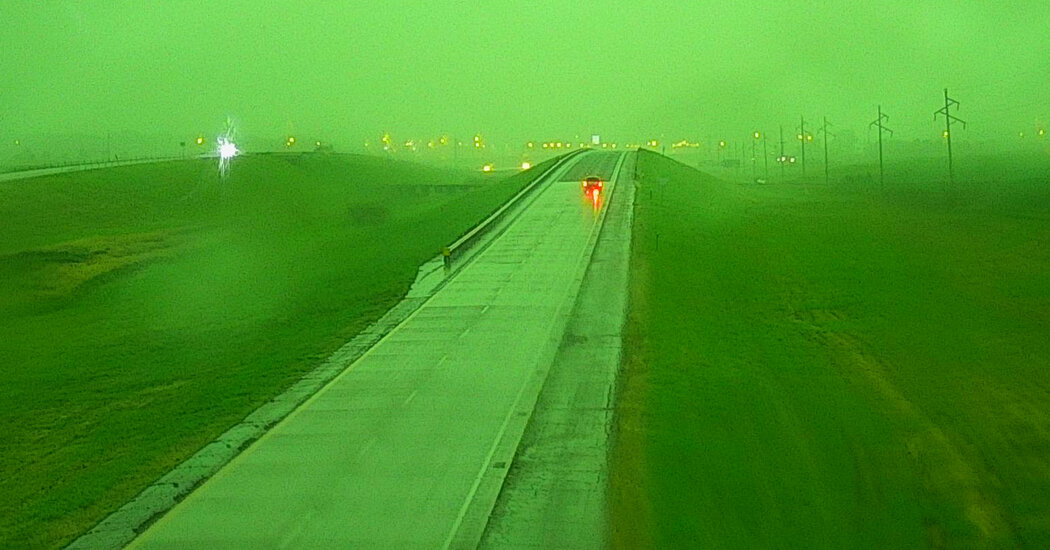 South Dakotans are accustomed to the storms known as derechos — they’ve had two recently. What they’re not used to seeing is skies that turn green right before severe weather tears through the region.

A derecho, which the National Weather Service describes as a powerful wind storm extending more than 240 miles, moved through South Dakota and other parts of the Plains on Tuesday and brought powerful winds — up to 99 miles per hour in some areas.

But before the derecho (pronounced deh-REY-cho) hit Sioux Falls, S.D., the storm caused the skies to turn green, an unusual weather phenomenon. Many people on social media shared images of the green skies, which were also captured on South Dakota Department of Transportation traffic cameras.

“I think it caught a lot of people’s attention because the sky did have that very unique green color to it,” said Peter Rogers, a meteorologist with the Weather Service’s office in Sioux Falls. “Because of the unique color that it did exhibit, I’m guessing that it will probably be a topic of discussion for quite a long time.”

Unusual colors before or during a storm sometimes occur depending on how sunlight interacts and scatters among different particles in the atmosphere, Mr. Rogers said. It is not uncommon during a storm for skies to turn purple or even completely dark during the daytime.

In Howard, S.D., about 70 miles northwest of Sioux Falls, the derecho brought winds of up to 99 m.p.h., according to the Weather Service. At the Sioux Falls Regional Airport, winds blew at 58 m.p.h. or more for about 45 minutes straight, peaking at 80 m.p.h., the Weather Service reported.

Mr. Rogers said the Weather Service had received reports of damage to tree crops, power lines and some buildings. There were no reports of injuries or fatalities associated with the derecho in the Sioux Falls region.

While the green skies were unusual, the Plains and the Midwest are no strangers to derechos, Mr. Rogers said.

“The residents of the area are very well aware of potential hazards that exist with those strong winds,” he said.

In August 2020, a powerful derecho destroyed several homes, demolished crops and left more than 250,000 people without power across Iowa and Illinois. At least four deaths were associated with the storm, according to the Weather Service.