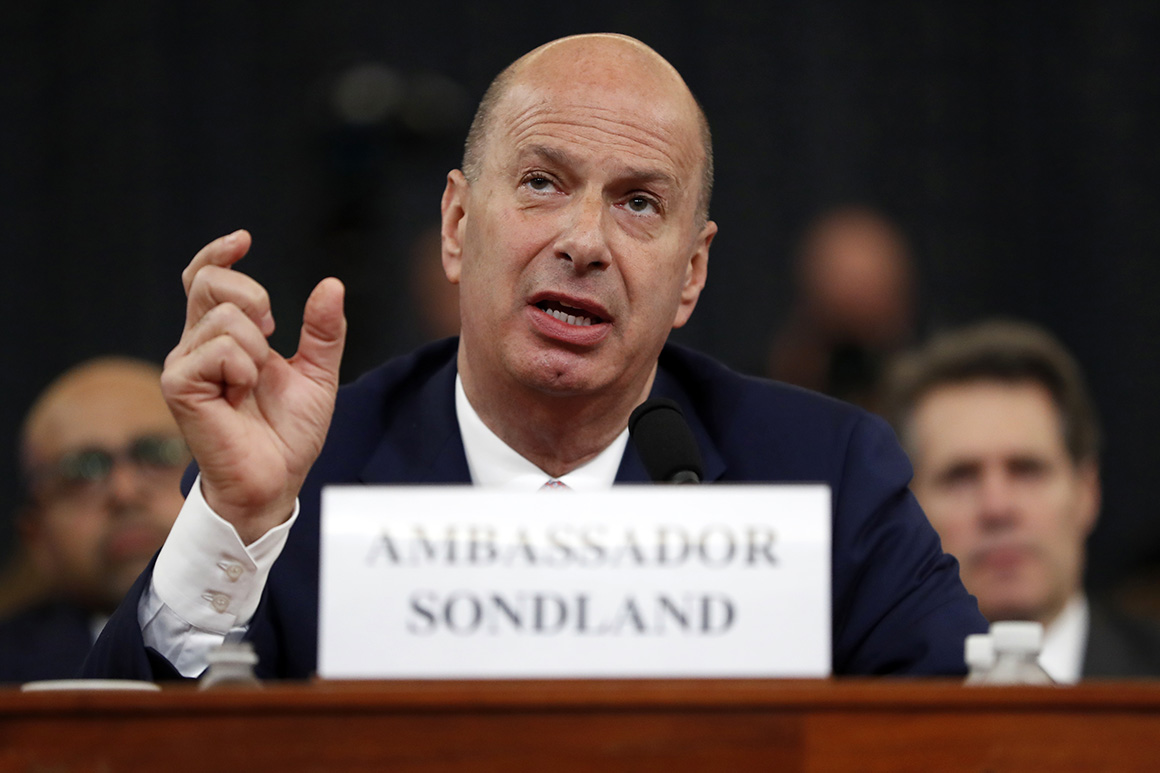 The suit says Sondland’s efforts to receive reimbursement were repeatedly thwarted, although it acknowledges at one point the State Department offered to pay $86,040 toward the fees.

Sondland became one of the highest-profile witnesses two years ago as House committees probed an alleged effort by Trump to withhold aid for Ukraine until the country’s leaders announced investigations that could be politically damaging to President Joe Biden, whom Trump saw at the time as a top potential rival to his reelection in 2020.

One of the probes Trump allies sought was to explore work Biden’s son Hunter did for a Ukrainian company, Burisma.

Sondland initially testified that Trump never told him explicitly to link a resumption of aid to announcements about the politically helpful probes, and he did not see such a direct link. However, Sondland later said that as discussions progressed, it became clear there was a “quid pro quo” and that he, in fact, conveyed such a linkage to a top Ukrainian official.

A month after Sondland’s testimony, the House voted to impeach Trump. In February 2020, the Senate acquitted him. Two days later, Trump fired Sondland from his post.

Sondland’s suit acknowledged that it is possible Pompeo did not have legal authority to promise on behalf of the government to pay Sondland’s legal costs. Attorneys for Sondland asked that if the court concludes Pompeo didn’t have such authority, he should be required to foot the bill himself.

Customarily, government employees called to testify before Congress are represented by agency attorneys or by the Justice Department. However, Sondland’s suit says he was repeatedly told by lawyers at the State Department and White House that government lawyers could not represent him.

Pompeo did not immediately respond to a request for comment placed through the Hudson Institute, the Washington think tank where he currently works.

A spokesperson for the Justice Department, which represents the U.S. government in such suits, also did not immediately respond to a request for comment.

Sondland was represented at the House hearings by Robert Luskin and Kwame Manley of Los Angeles-based law firm Paul Hastings. The suit says Sondland, founder of a hotel chain in the Northwest, has paid their fees in full.