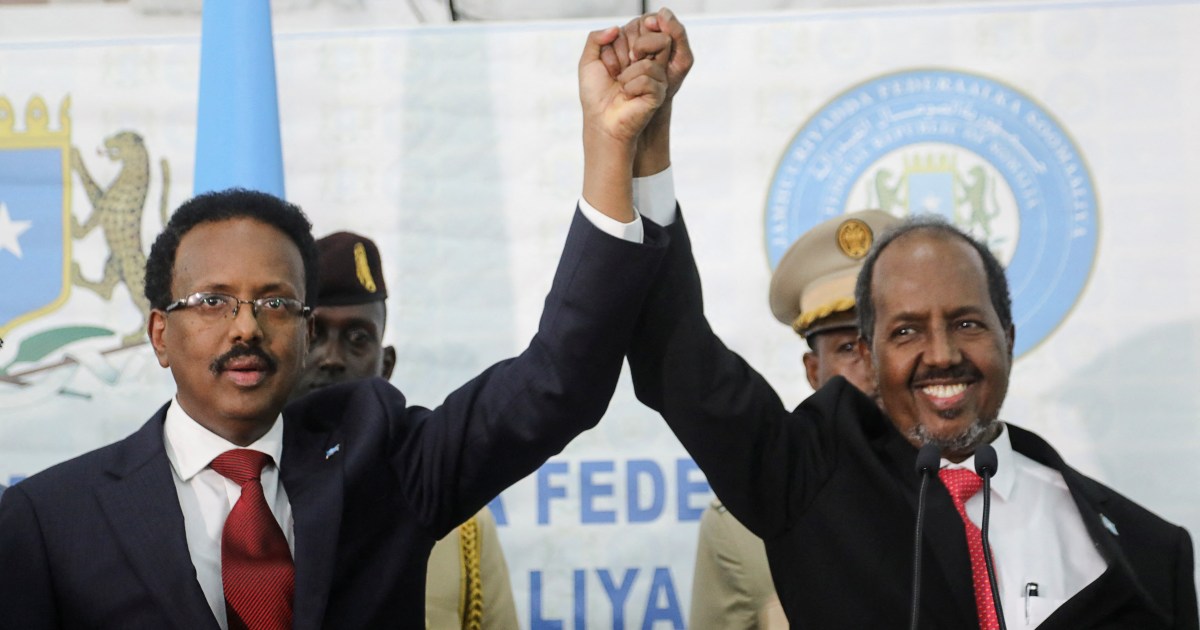 Somali legislators have elected former leader Hassan Sheikh Mohamud as the country’s next president, following a long-overdue election on Sunday in the troubled Horn of Africa nation.

Hassan Sheikh Mohamud, who served as Somalia’s president between 2012 and 2017, won the contest in the capital, Mogadishu, amid a security lockdown imposed by authorities to prevent deadly rebel attacks.

After a marathon poll, involving 36 candidates, that was broadcast live on state TV, parliamentary officials counted more than 165 votes in favour of Mohamud, more than the number required to defeat incumbent President Mohamed Abdullahi Mohamed.

Supporters of Somalia’s new leader defied the curfew to pour onto the streets of Mogadishu, cheering and firing guns as it became clear that Mohamud had won the vote.

Many hope the election will draw a line under a political crisis that has lasted well over a year, after Mohamed’s term ended in February 2021 without an election.

Mohamed, who is also known as Farmaajo, conceded defeat, and Mohamud was immediately sworn in.

The new president struck a conciliatory tone in his acceptance speech from the airport compound in Mogadishu, which was patrolled by African Union (AU) peacekeepers.

“It is indeed commendable that the president is here standing by my side,” Mohamud said, referring to the former leader, who had sat with him as ballots were counted.

“We have to move ahead, we do not need grudges. No avenging,” he said.

The 66-year-old Mohamud is the leader of the Union for Peace and Development party, which commands a majority of seats in both legislative chambers.

A member of the Hawiye clan, one of Somalia’s largest, Mohamud is regarded by some as a statesman with a conciliatory approach. He is also well-known for his work as a civic leader and education promoter, including for his role as one of the founders of Mogadishu’s SIMAD University.

Mohamud had promised during campaigning that his government would be inclusive, acknowledging the mistakes of his previous government, which faced multiple corruption allegations and was seen as aloof to the concerns of rival groups.

He now inherits several challenges from his predecessor, including an increasing number of attacks from the al-Qaeda-linked al-Shabab group and a devastating drought that threatens to drive millions into famine.

Two suicide bombings in March killed 48 people in central Somalia, while an attack on an AU base earlier this month killed 10 Burundian peacekeepers. The attack was the deadliest raid on AU forces in the country since 2015.

The United Nations has meanwhile warned of a humanitarian catastrophe unless early action is taken, with emergency workers fearing a repeat of the devastating 2011 famine, which killed 260,000 people – half of them children below the age of six.

Mohamud will also need to repair the damage caused by months of political chaos and infighting, both at the executive level and between the central government and state authorities.

“It’s really been a lost year for Somalia,” said Omar Mahmood, an analyst at the International Crisis Group (ICG) think-tank.

“This long-awaited election has been divisive. Reconciliation is the most immediate challenge,” Mahmood told the AFP news agency.

Though just holding Sunday’s election was a success of sorts, many Somalis were sceptical of any real improvement.

Most of the 36 candidates were old faces recycled from the past who had done little to stem war and corruption, they complained. Votes are anyway influenced more by money changing hands than political platforms, Somalis and analysts say.

“Hassan Sheikh is not good but he is the lesser of the two evils. We hope Somalia will be better,” said Halima Nur, a mother of four in Mogadishu.

“We hope this time Hassan Sheikh Mohamud will improve and become a better leader. We hope Somalia will be peaceful, though this may take time,” said student Mohamed Ismail.

Somalia has not held a one-person, one-vote election in 50 years. Instead, polls follow a complex indirect model, whereby state legislatures and clan delegates pick lawmakers for the national parliament, who in turn choose the president. The third round of voting was decided by 328 legislators, and a simple majority was enough to choose a winner.

Analysts had predicted that Mohamed, the former president, would face an uphill battle to be elected amid widespread criticism from Somalis and foreign donors for trying to extend his tenure last year.

Somalia’s international partners had repeatedly warned that the election delays – caused by political infighting – were a dangerous distraction from the fight against al-Shabab fighters who have been trying to overthrow the government for more than a decade.

Mohamed, who rose to power in 2017 as a symbol of a Somali diaspora eager to see the country prosper after years of turmoil, leaves behind a country even more volatile than before he took over, and with rising al-Shabab attacks.

In his concession speech, Mohamed said his successor faced a “huge task” and pledged solidarity with him.

“Let us pray for the new president, it is a very tedious task,” he said. “We will be in solidarity with him.”

Somalia has endured conflict and clan battles with no strong central government since the fall of Mohamed Siad Barre in 1991. The government has little control beyond the capital and the AU contingent guards an Iraq-style “Green Zone”.