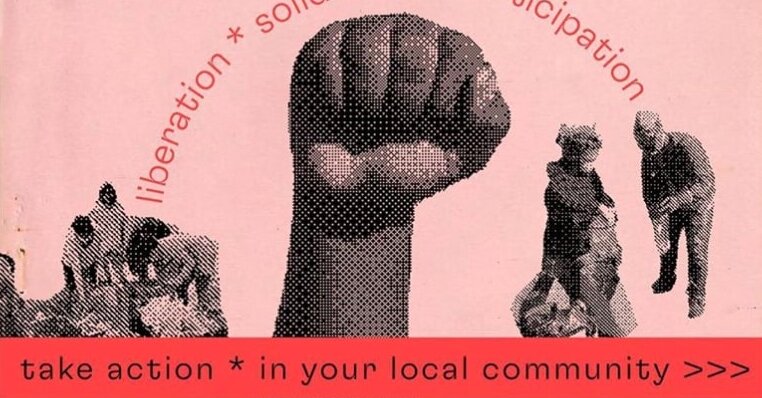 Though these guides are digital, they borrow from the analog art of zine making.

“Zines, you know, it’s a democratic way to share information,” said Barbara Calderón, 32, an intersectional artist and librarian and the founder of Colectiva Cósmica, an art collective that hosts art workshops, publishes zines and organizes within creative communities. “The zine has always been about providing access.”

These accounts are aimed at decentralizing knowledge and power, though they of course rely on access to technology.

Vanessa Newman, 25, created Design to Divest, an initiative that connects Black and mission-based organizations to designers, who provide services at no cost. Some members of the group have also offered to cover printing costs, too, for posters about coronavirus testing sites.

“Not everyone’s on Instagram,” Newman said. “There are a lot of people who need resources and they’re not following us. They’re not in that ecosystem, and thinking about resource accessibility in that way too is really interesting.”

In an article for Vox, the writer Terry Nguyen suggested that the popularity of these “social justice slide shows” relies on their imitation of direct-to-consumer brand posts, with their serif fonts and soothing color palettes. She warned that such templates could give posts that have been poorly written and shoddily researched an air of false legitimacy.

For several creators of these posts, aesthetics are just one design consideration. Haleema Bharoocha, 21, a volunteer for @southasians4blacklives, an account that aims to educate South Asians about anti-Blackness and explore South Asian identity, said she often considers ways to include alternative text and image descriptions in her designs and posts.

“I always think about those kinds of things as I’m developing graphics and content, just to make it as easy as possible for people to digest,” she said.

Such methods resemble the way that zine makers, like those in the riot grrrl movement of the 1990s, built networks through D.I.Y. publishing.

“The emergence of zine history and the way that we understand it now is really thanks to the riot grrrl movement who were writing down their words, their experiences, their images and sharing it with the community,” said Catherine Feliz, 28, an interdisciplinary artist and a founder of Abuela Taught Me, a pop-up botanica.

Feliz said that “proto-zines,” educational and activist-minded pamphlets that preceded the ’90s heyday of zine making, could be seen as a precursor to today’s digital mini-guides, and that such documents should be archived.

“So much of what is shared and distributed is information and content that isn’t published anywhere else,” Feliz said. “Because it just wasn’t allowed, or we didn’t have access, because all of the things that silence and that erase our voices and our experiences.”

A proto-zine made in the 1960s by the Black Panther Party and the Student Nonviolent Coordinating Committee, for example, was reprinted in a recent issue of The Comics Journal, with an introduction by Aaron Dixon, a civil rights activist and former captain of the Black Panther Party’s Seattle chapter. The pamphlet was a comic that explained the responsibilities of a sheriff and other public officials, aimed at informing Black voters of their ability to effect change.

Though heralded for their scrappy, D.I.Y. spirit, these guides take time and work to make. Members of the S.N.C.C. read through a 12-book set of the Alabama Code of Laws to inform their work. @southasians4blacklives, which is run by volunteers, developed 12 hours of curriculum and programming that would have been conducted in person.

“We have to recognize that this is a real form of education and a real form of labor that’s happening, especially from Black folks, especially from trans folks, who are sharing very critical knowledge with us,” Bharoocha said. “Followers aren’t going to pay their rent, and they’re not going to compensate people. We have to find better ways to compensate for that kind of labor in monetary ways especially, however we can.”

Although Instagram has helped people connect during this period of isolation and unrest, many creators are skeptical of its ability to help build a more equitable society. Rather, they see it as a stopgap for educating people and encouraging civic engagement.

“I think we all have to be really aware that learning doesn’t end on Instagram. It’s literally the beginning of the beginning,” Newman said. “But I do think it’s always important to think about how you can take the spaces that we have on Instagram and turn them into communities off of that platform.”