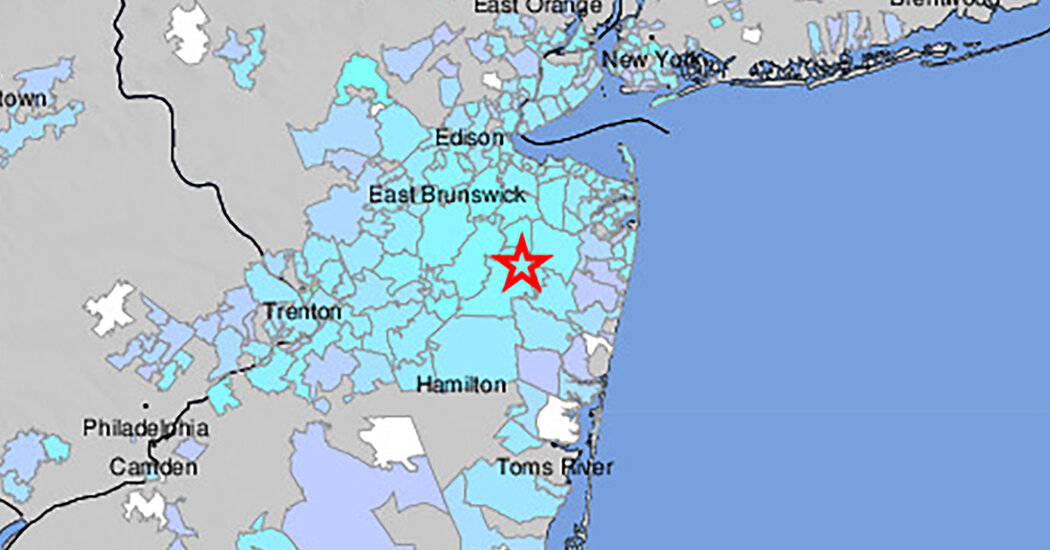 A small earthquake shook an eastern section of New Jersey early on Wednesday, but there were no immediate reports of injuries or damage, officials said.

The U.S. Geological Survey said that the 3.1-magnitude earthquake occurred at about 2 a.m. near East Freehold, a community of about 4,800 people. But people around Monmouth County, a coastal area of more than 600,000 people, reported feeling the earthquake’s effects.

Fernando Bravo, who runs Tony’s Freehold Grill, said he woke up at his Freehold house at 1:57 a.m. and went to the kitchen for water. “I heard noises outside,” he said. “When I checked out the window I did not see anything, but after a minute I heard a big noise.”

He said it sounded like “something big dropped” or crunched “like wood is broken.” He checked on his daughters, who told him it was an earthquake.

When he arrived at the grill at about 6:30 a.m., he noticed the security camera had picked up a little tremble inside his office. A few customers, dropping by for their morning coffee, also said they felt it, said Jacklyn Bravo, his daughter and a waitress at the diner.

Sheriff Shaun Golden, speaking to a reporter for WNBC, said that there were no reports of immediate damage but that full assessments would be conducted early on Wednesday. “Just a lot of nerves,” he said.

Workers in the county’s operations center felt tremors like “jet engines for a few seconds flying overhead,” he said, followed by a “little rattle.” Then the department was deluged by 911 calls from concerned residents Sheriff Golden said.

An earthquake measured at 3.0 is large for the metropolitan New York region. In 2009, an earthquake of that strength hit northern New Jersey, with its epicenter in Morris County, about 35 miles west of Midtown Manhattan.

The largest in the state was a 4.8 magnitude near Trenton in 1938, said Robert Sanders, a geophysicist at the National Earthquake Information Center.

“For the Eastern United States, we don’t really have a lot of defined fault areas,” he said in an interview. “They are just not as active regions.”

The earthquake on Wednesday was about three miles deep. “An earthquake of this magnitude is relatively rare, one every few decades,” he said.

Stronger earthquakes have struck to the south in recent years, including a 5.1-magnitude earthquake that hit North Carolina near its border with Virginia last month, and a 5.8-magnitude earthquake in Mineral, Va., in 2011, that left cracks in the Washington Monument and was felt from Georgia to Maine. The earthquake near East Freehold was felt from the Philadelphia area through the New York metropolitan region and into western Connecticut. The range was “not surprising” given how efficiently earthquake energy is transmitted in the eastern United States, said Arthur Lerner-Lam, the deputy director of the Lamont-Doherty Earth Observatory in New York.

He said in an interview that bedrock does not fracture frequently in the Northeast, where earthquakes are typically small. That means an earthquake in the region is felt over a wider geographic area than one of the same magnitude on the West Coast.

“In California, the bedrock is really fractured so the earthquake does not move very far,” he said. “The bedrock in the Northeast or along the Appalachians is particularly efficient in transmitting energy.”

Susan Collins Hasn’t Changed Much, but Maine Has