Shouting Turns to Violence in Portland as Dueling Protests Converge 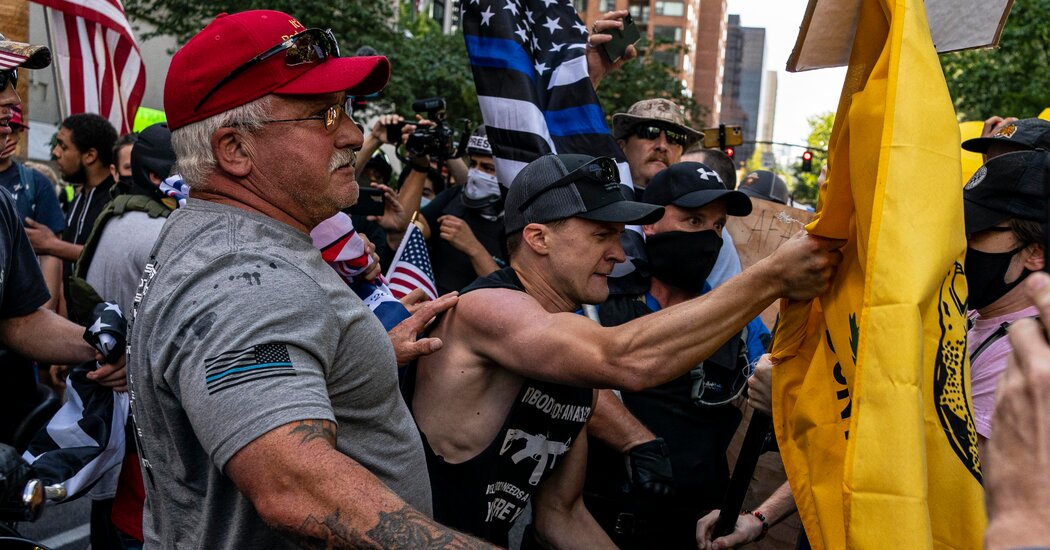 PORTLAND, Ore. — Right-wing and left-wing groups clashed in front of the U.S. courthouse in Portland, Ore., on Saturday, weeks after federal agents pulled back from the site of protests that have gripped part of the city’s downtown for months.

A group of about 200 protesters, including members of the Proud Boys and families supporting the police, gathered along the courthouse sidewalk beginning at 11 a.m. Many of them were holding American flags, while others carried assault rifles and wore tactical military gear.

Almost immediately, a similar number of Black Lives Matter protesters gathered across the street, many dressed in all black and carrying shields or paintball guns.

Within an hour, shouting turned to violence.

Paintballs flew between the two sides. Bottles soared back and forth. Shoves became punches. As protesters who were struck with pepper spray moved back, others came forward to take their place.

All the while, police officers watched from a distance and chose not to intervene.

The Portland Police Bureau said in a news release that it did not declare a riot because it had limited personnel for the number of protesters and weapons present.

The statement said that weeks of “violent actions directed at the police” were “a major consideration for determining if police resources are necessary to interject between two groups with individuals who appear to be willingly engaging in physical confrontations for short durations.”

Several people were punched or hit with objects, although there did not appear to be serious injuries. Mike Redwood, a Black Lives Matter protester, said he was hit in the face with a baton and Tased during an altercation with far-right demonstrators.

“I still have all my teeth and nothing’s broken, so I guess it’s not that bad for being hit with a bat,” he said while holding an ice pack to his cheek.

For about three hours, the two sides were in almost constant conflict, much of it violent. Mr. Redwood said that he and several other Black Lives Matter protesters had occupied part of the street, and that he held his ground when the opposing line advanced.

After a majority of the right-wing demonstrators left, police officers declared the crowd unlawful and dispersed it.

Mr. Redwood said it was one of the more violent confrontations he had seen between right-wing and left-wing demonstrators in Portland.

“I haven’t seen it to this degree,” he said.

Portland has been the site of some of the country’s most visible Black Lives Matter protests since George Floyd was killed in police custody in Minneapolis in late May. There have been protests of varying degrees downtown for more than 80 days.

The regular demonstrations prompted President Trump to send federal agents to protect the U.S. courthouse, a move that mothers, veterans and nurses considered a provocation and protested against. Those agents, who fired rubber bullets and tear gas at protesters, have since been pulled back, and rallies have continued.

Susan Schaffer, who lives in Portland and joined the pro-police rally, said she was mortified by Mr. Floyd’s death. Still, she said she thought the protests had been allowed to continue for too long and with too much leniency from local leaders.

Karen Mann, who came to join the protesters from Salem, said she was partly inspired to attend when her house was egged after she put a Trump sign in her yard.

The protests in Portland have fostered that animosity, she said.

“Why can’t I say I support Trump? I should be able to do that without being intimidated,” she said. “They really want to destroy everyone who is center-right or center.”

Turning away from the pepper spray that hung in the air, Andrew Benjamin said he worried that Mr. Trump and other conservative politicians would say that Saturday’s protest was an example of chaos caused by the Black Lives Matter movement.

“They’ll say Portland is burning — Portland’s not burning,” Mr. Benjamin said. “This is one side of one block. It’s not even downtown, it’s right here, in front of that building.”