Shipwreck From 1891 is Found in Lake Superior 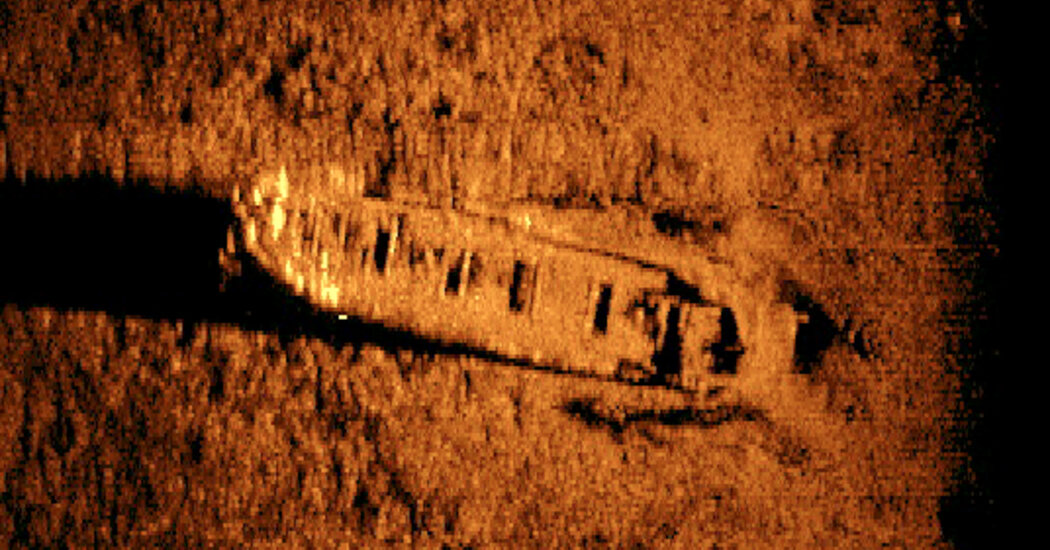 On May 4, 1891, as gale-force winds and waves raged on Lake Superior, the crew of a schooner barge named Atlanta abandoned ship as it sank. The six men and one woman, a cook, clung to their lifeboat for nine hours, fighting at its oars to guide it to the Michigan shore.

As they neared land, according to archival news reports, the lifeboat capsized within sight of a distant rescue patrol, which mistook it for a tree trunk rolling in the turbulent water. Six of the crew members managed to climb back in the boat, but it flipped again. Only two men survived.

This month, the Great Lakes Shipwreck Historical Society said that the wreckage of the Atlanta had been found after it had sat undetected in the cold oblivion of the lake’s depths for more than a century. The announcement revived the story of how the Atlanta’s crew members fought for their lives on the world’s largest freshwater lake.

“Just suddenly, our cameras were on it,” Bruce Lynn, the executive director of the Great Lakes Shipwreck Museum in Paradise, Mich., said in an interview. “We were the first human eyes to be looking at this since that dramatic moment. I about jumped out of my chair.”

Lake Superior, which is also bordered by Minnesota, Wisconsin and Ontario, Canada, has historically been crisscrossed by shipping lanes. The high volume of traffic meant collisions, which meant hundreds of ships sank, turning the deepest terrain of the lake into a maritime graveyard ripe for discovery.

In 2021, the Great Lakes Shipwreck Historical Society, the nonprofit that operates the museum, had its best season for locating wrecks, Mr. Lynn said, helped by good weather and side-scan sonar, which sends and receives acoustic pulses that help map the seafloor and detect submerged objects. It discovered nine shipwrecks, including the Atlanta, the most in any season, after towing the sonar 2,500 miles, said Darryl Ertel, the society’s director of marine operations.

Hundreds of wrecks are estimated to be in the nearly 32,000-square-mile lake, many of them in the area of Whitefish Point on Michigan’s Upper Peninsula, which the Atlanta’s crew members desperately tried to reach in their lifeboat.

Last July, the society’s researchers dragged the sonar in a grid pattern across the lake. They picked up a feature 650 feet deep that they could not immediately identify, and marked it for future exploration.

The Atlanta was slowly making itself known.

Mr. Lynn returned with the crew in August. The weather was calm. They lowered a remote-controlled device into the water. As its camera ranged, a ship came into view, its scrollwork glistening in the clear water. (Lake Superior does not have the invasive zebra mussels that encrust wrecks in the other Great Lakes.)

The letters on the ship’s name spelled “Atlanta.”

“It was a target we had found earlier but were not exactly sure what it was,” Mr. Lynn said. “You never quite know until you see a smoking gun. That name board was it. It announced with no uncertain terms ‘This is what I am.’”

Lake Superior’s shipwrecks are interwoven with history. In 1918, as World War I drew to a close, two minesweepers built in Canada for France sank, killing dozens of sailors. In 1975, the Edmund Fitzgerald, one of the largest freighters on the Great Lakes, sank amid driving snow with 29 men on board without sending a distress signal, becoming a cultural legend thanks to a haunting ballad by Gordon Lightfoot.

The Atlanta’s voyage was typical of the Industrial Revolution, when schooner barges hauled iron ore and coal across Lake Superior, said Fred Stonehouse, a local historian.

About 550 shipwrecks have been located in the lake, while up to 40 vessels remain missing. Their journeys have been recorded by officials at locks — the passageways that connect the lakes — and in newspaper reports about ship traffic. “‘Sailed off into a crack in the lake’ is the phrase you often saw a century ago,” Mr. Stonehouse said.

Sometimes bodies or bits of wreckage turned up, he said.

“This is really about solving historical mysteries,” Mr. Stonehouse said.

The discovery of the Atlanta, about 35 miles offshore, intrigued the researchers because of the firsthand accounts of the survivors. In early May 1891, the Soo Democrat, a weekly newspaper, published a series of reports about the ill-fated journey and the rescue.

The 172-foot Atlanta, laden with coal, had set out from Buffalo, N.Y., for Duluth, Minn. On May 3, 1891, it encountered a light breeze. By night, “one of the worst gales which swept the greatest of all lakes was raging,” the Soo Democrat reported. The storm fell upon the Atlanta, which was being towed, sails down, by another ship, the Wilhelm.

The tow line broke, and the Atlanta began taking on water, which its crew tried to stave off with a pump.

At 9 a.m. on May 4, the ship, with 10 feet of water in its hull, was abandoned. With the gale “raging at its worst,” the crew stayed on the lifeboat for nine hours. About 200 yards from Whitefish Point, the lifeboat capsized within sight of a rescuer from the U.S. Life-Saving Service, a precursor of the Coast Guard, who mistook it for a tree trunk rolling in the waves.

All but one member of the Atlanta’s crew clamored back in to the lifeboat. After another 100 yards, it capsized again.

“It was here that the struggle for life raged the fiercest,” the newspaper reported.

The remaining crew members were seen bobbing in the water before they sank beneath the waves, the newspaper said. Two of them, identified as John Pickel and “Nellie” Wait, were pulled from the surf “more dead than alive,” and were “all that remain to tell the tale of a struggle which eclipses fiction in its terrible details.”

The Atlanta will remain undisturbed. A Michigan law makes it illegal to raise shipwrecks, but Mr. Lynn said it would also be like raiding a burial plot.

“These are like grave sites,” he said. Finding the Atlanta, he added, “was fortunate. There were survivors who can tell us what happened.”