Shanghai to expand lockdown to most residents as COVID cases rise – Reuters.com 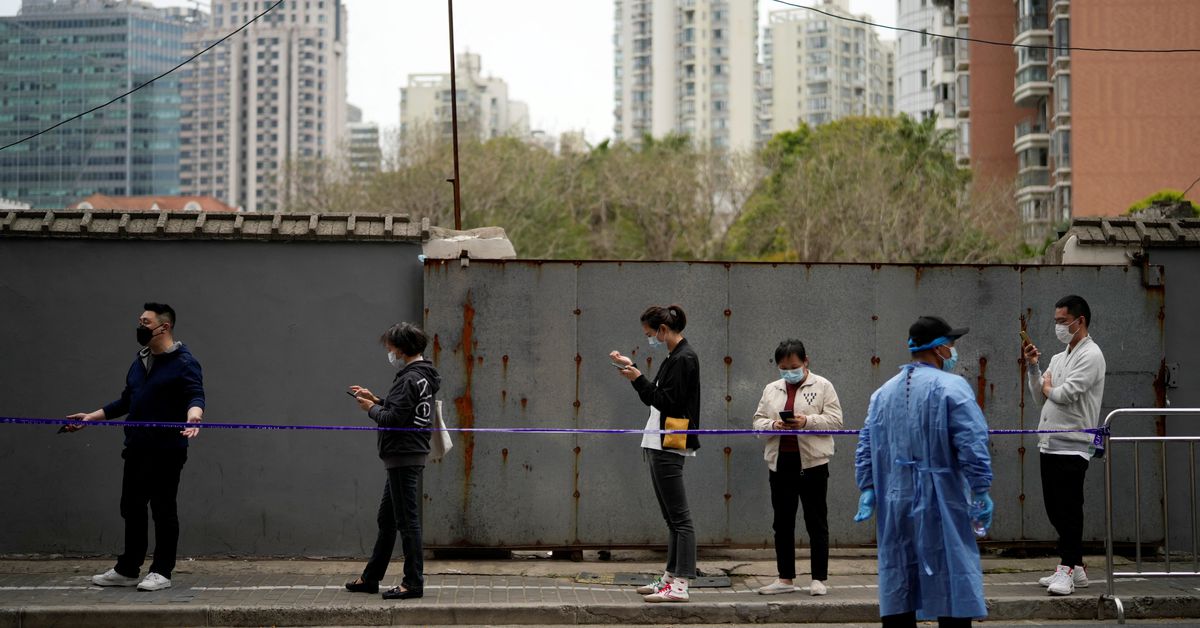 SHANGHAI, March 31 (Reuters) – Shanghai is set to put the vast majority of its residents under COVID lockdown from Friday, as it expands curbs to include the western half of the city and extends restrictions in the east where people have already been forced to stay home since Monday.

The Chinese commercial hub, home to 26 million people, is on the fourth day of a 10-day lockdown that was to cover the city in two phases, with first the east and then the west entering lockdowns of five days each.

The stay-at-home measure in the financial and industrial districts in the east began on Monday and was due to lifted at 5 a.m. on Friday.

However, the city government late on Thursday said it would lift the curbs in stages instead.

Residents living in buildings where positive cases were found will remain under lockdown for 10 more days, while those in the same housing compound or neighbourhood will face shorter extensions of restricted movement.

The remaining residents who live in areas classified as low risk will be free to leave their homes, but are urged to work from home and to reduce outings and gatherings, it said.

Restaurants will only be allowed to provide take away services and non-essential businesses such as bars and libraries will remain shut, it added.

“We request the public to continue to support and cooperate with the city’s epidemic control work,” the Shanghai government said. “We will further optimize and adjust the prevention measures according to the epidemic situation.”

Affected residents turned to social media and chat groups to discuss the new measures and many believed they were set to be locked in for longer. “Is there any neighbourhood in Pudong that has no positive cases?,” quizzed one user on the Weibo platform using a term which means east of the river.

The city government also said the lockdown would expand to areas west of the city’s Huangpu river from Friday, prompting residents in those areas to scramble on Thursday to stock up groceries.

In central Shanghai, vegetable sellers and butchers hawked their wares from behind barriers and on sidewalks. Restaurants hoping to cut losses advertised deep discounts through chat groups on social media.

“Lockdown super deal! 50% off on steaks”, advertised a pamphlet from a high-end steak house.

Shanghai’s daily tally of infections eased for the first time in about two weeks, authorities said on Thursday.

Shanghai makes up almost 80% of local asymptomatic cases across China for Wednesday, and about 20% of those with symptoms. read more

The outbreak, and the curbs against it, have disrupted life for residents and businesses.

Volkswagen’s (VOWG_p.DE) Shanghai joint venture with SAIC Motor (600104.SS) will suspend work at its factory between April 1 and 5, reversing an earlier decision to maintain some production. read more

Many residents have vented frustration on social media with videos and images of crowded quarantine centres, while seeking help with medical treatment and buying food. read more

In a letter to residents, the city government thanked them for their efforts and sacrifices, especially as some spent a long time in quarantine and lockdown. But it urged them to keep co-operating to rein in the virus.

City government official Ma Chunlei, however, acknowledged at a daily news conference that the city could have done more, adding that authorities were trying to improve distribution of food and issues with securing medical help.

“Our knowledge about the highly contagious Omicron variant has been insufficient, we were inadequately prepared for the fast-rising number of infected patients, and our control measures have not been up to speed,” he said.

Still, even though some in Shanghai have questioned how practical China’s strategy of “dynamic clearance” is, the approach will not be relaxed, state news agency Xinhua has said, saying it was essential to protect lives and health.