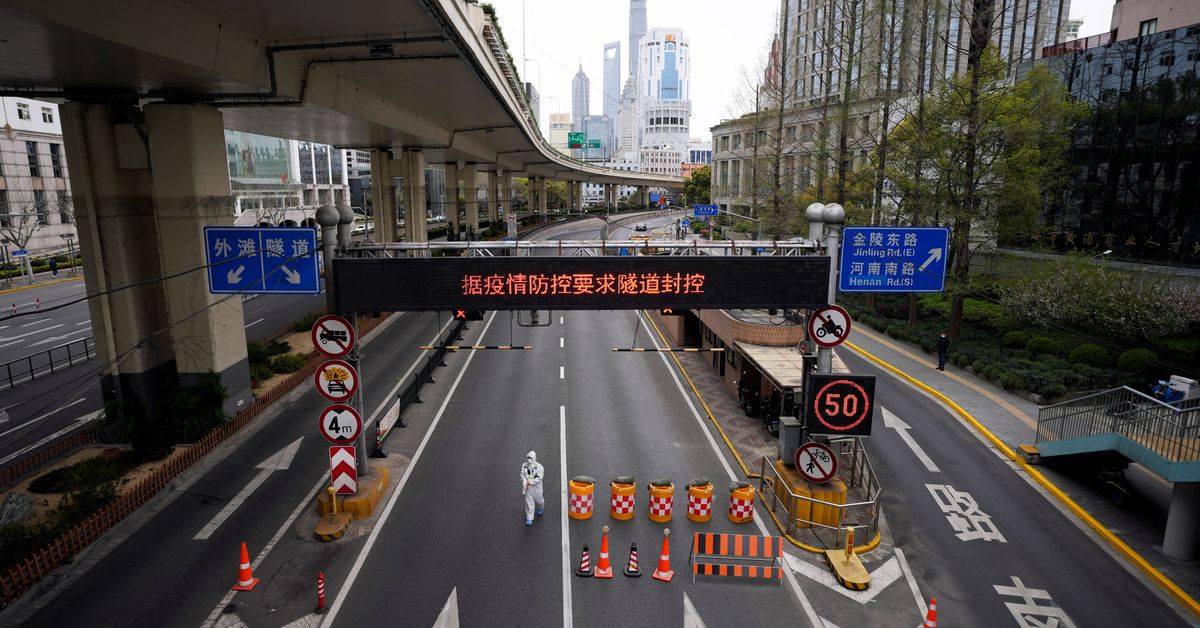 The snap lockdown, announced by the local government late on Sunday, will split China’s most populous city roughly along the Huangpu River for nine days to allow for “staggered” testing by healthcare workers in white hazmat suits.

It is the biggest COVID-related disruption to hit Shanghai, and sent prices of commodities including oil and copper lower on fears that any further curbs could hurt demand in China, the world’s second-largest economy. read more

Residents east of the Huangpu were confined to their homes. Some said healthcare workers arrived to conduct tests as early as 7 a.m. on Monday.

Those in the west rushed to stockpile food and other goods as they prepared for a similar fate from April 1. Delivery services were overwhelmed and supermarkets ran low on supplies. Several social media users posted images of what they had managed to buy.

“Many wholesale markets are now closed,” Bi Yingwu, a 50-year old stallholder, said. “Some vendors are reluctant to buy in vegetables. If we cannot get vegetables from wholesalers or the wet market is closed, we are finished.”

The curbs mark a turnaround for Shanghai’s authorities, who as recently as Saturday denied the city would be locked down as it pursued a more piecemeal “slicing and gridding” approach to try to rein in infections. read more

“Containing the large scale outbreak in our city is very important because, once infected people are put under control, we have blocked transmission,” she told a briefing.

Infection and death numbers are low by global standards. But China has imposed a zero-COVID policy that has all but closed its borders to travellers for two years, and rushes to shut off every chain of infection.

A worker in a protective suit walks at an entrance to a tunnel leading to the Pudong area across the Huangpu river, after restrictions on highway traffic amid the lockdown to contain the spread of the coronavirus disease (COVID-19) in Shanghai, China March 28, 2022. REUTERS/Aly Song

Shanghai recorded a record 3,450 asymptomatic COVID cases on Sunday, accounting for nearly 70% of the nationwide total, along with 50 symptomatic cases. read more

Shanghai said earlier this month its daily testing capacity was around 3 million, but Chen Erzhen, a doctor in charge of a city quarantine facility, warned it still might not be enough to outpace the spread of the virus.

“When case numbers reach a certain level, the difficulty of relying upon previous staff deployments increases by a large degree,” he told government newspaper Liberation Daily.

The new lockdown should at least ensure the “stillness” required to bring the outbreak under control, he added.

Wu had told a briefing on Saturday that Shanghai could not be locked down for long because of the important role it played in the national and even global economy.

Shanghai’s Public Security Bureau said it was closing cross-river bridges and tunnels, and highway tollbooths concentrated in the city’s east until April 1. However, ports and the city’s two airports remained open.

Shanghai also ordered firms to shut, exempting those offering public services or supplying food, although factories that managed to put in “closed-loop” systems could continue production. Some hospitals also suspended services as they release staff and other resources to assist with mass testing.

U.S. automaker Tesla (TSLA.O) is suspending production at its factory, located in a district impacted by the first stage of the lockdown, for four days, two people familiar with the matter told Reuters. read more

Volkswagen (VOWG_p.DE) , however, whose Shanghai plant is in a part of the city that is set to be tested in the second stage, said its production in the city was ongoing. [nP8N2VV00E]