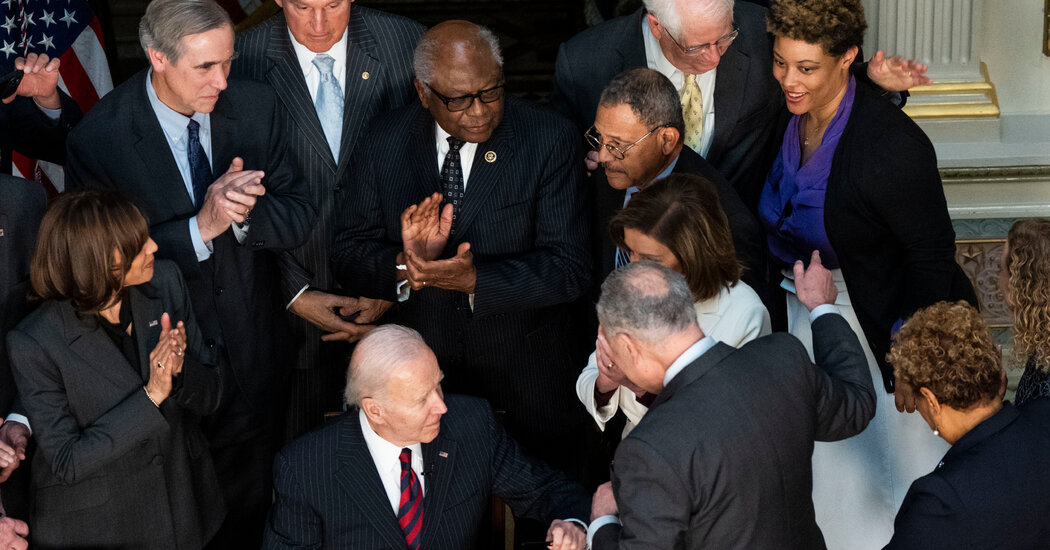 WASHINGTON — The Senate confirmed Shalanda Young on Tuesday to serve as the director of the Office of Management and Budget, giving the agency permanent leadership for the first time in more than a year as it prepares the second budget of the Biden administration.

The Senate approved Ms. Young, who is the first Black woman to head the agency, with a vote of 61 to 36. The vote came nearly a year after Ms. Young was confirmed as deputy budget director and began serving as the acting head of the agency.

“It shouldn’t have taken this long to confirm someone as obviously qualified as Shalanda Young,” said Senator Chuck Schumer, Democrat of New York and the majority leader, adding, “She’s proven capable of working with Republicans and Democrats alike.”

Ms. Young, a former senior aide on Capitol Hill, had been widely viewed as a favorite to lead the White House budget office under President Biden. She grew up in Clinton, La., and earned degrees from Loyola University New Orleans and Tulane University.

She began working at the National Institutes of Health in 2001 and moved to the House Appropriations Committee in 2007. She climbed the staff hierarchy to become the first Black woman to serve as the committee’s majority staff director, braving the annual marathon of late-night negotiations over the dozen bills that fund the government.

“I want to thank the president for the trust he has placed in me, as well as members of both parties in the Senate for their support,” Ms. Young said in a statement, adding that she was “incredibly honored.”

“Together with the extraordinary team at O.M.B., we will continue to build on the historic progress our country has made, advance the president’s ambitious agenda and deliver results for the American people,” she said.

In her role in the House, Ms. Young helped shepherd more than $3 trillion in pandemic relief packages into law, on top of the annual negotiations over how to keep the government funded, winning bipartisan plaudits for how she conducted herself.

Mr. Biden initially nominated Neera Tanden, a former adviser to Hillary Clinton and the president of the Center for American Progress, a liberal think tank, to helm his budget office. But Ms. Tanden withdrew amid bipartisan opposition and has since taken on different roles in the White House that did not require Senate confirmation.

Ms. Young was confirmed as deputy budget director last March, and Mr. Biden announced her nomination to be director in November. Over the past year, she oversaw the release of Mr. Biden’s first budget, helped finalize the $1 trillion infrastructure law and participated in negotiations to produce the first government spending package of the Biden administration, which won final approval in Congress on Thursday. Just before her confirmation, Ms. Young was at the White House watching Mr. Biden sign that package into law.

“As evidenced by the strong bipartisan confirmation vote she received, Shalanda Young is well known to many of us due to her years of experience on the House Appropriations Committee staff,” Senator Susan Collins, Republican of Maine, said in a statement, describing Ms. Young as “smart, fair and knowledgeable.”

Some Republicans objected to Ms. Young’s move to the budget office in part because of her support for getting rid of the so-called Hyde Amendment in the annual spending bills, which prohibits federal funds from going toward most abortions.

At the insistence of Republicans, whose votes were needed to pass the spending package that Mr. Biden signed into law on Tuesday, that policy restriction remained in the newly enacted legislation.

The president has nominated Nani A. Coloretti, a former deputy secretary of the Department of Housing and Urban Development during the Obama administration, to serve as the deputy budget director. If Ms. Coloretti is confirmed by the Senate, she would become one of the highest-ranking Asian Americans, Native Hawaiians or Pacific Islanders in the federal government, according to the White House.