Severe Weather in the South: What to Know About the Forecast 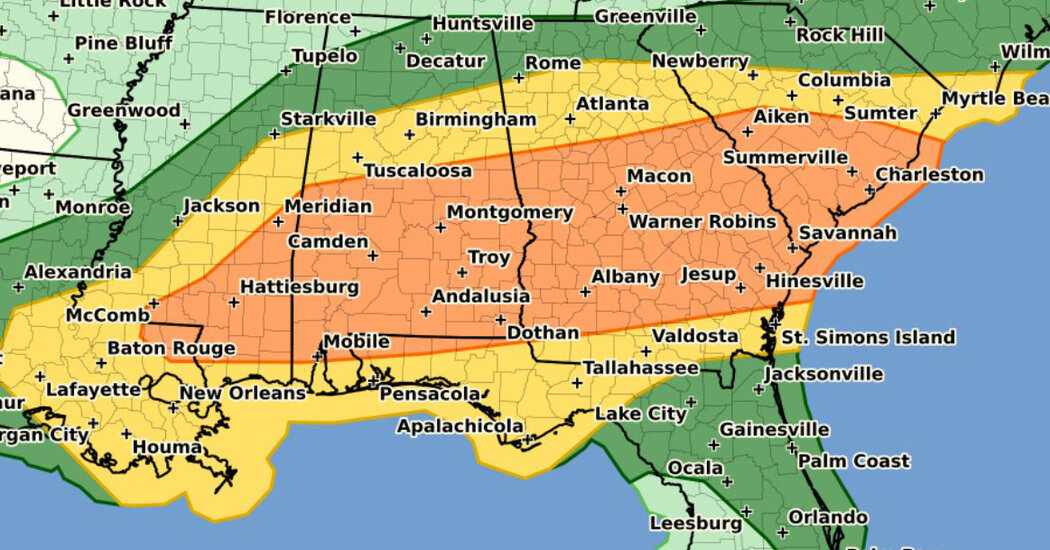 Amid the height of spring’s severe weather period, meteorologists and emergency officials on Tuesday were planning for another round of unsettling storms in parts of the South, following a pattern of unpredictable weather the region has seen in recent weeks.

More than nine million people in the South, from southern Mississippi to Georgia and up to southern South Carolina, were under an enhanced threat of severe weather, including the risk of “a strong tornado,” the National Weather Service Storm Prediction Center said.

Steve Miller, a meteorologist with the Weather Service’s office in Mobile, Ala., which covers some counties in Mississippi, described the system as “a line of thunderstorms” or a squall line, a group of storms arranged in a line with high winds and heavy rain.

They began early in the day in the lower Mississippi Valley and could possibly intensify as they move through the Southeast into the Carolinas in the afternoon.

In Mississippi, there were reports of flash flooding on roadways, large hail and downed trees on Tuesday morning. Storm debris blocked both directions of U.S. Highway 80 in Newton County, according to the Mississippi Department of Transportation.

The agency shared a video featuring heavy rain and strong wind gusts as a “suspected tornado” passed its district office.

More than 11,000 customers in Mississippi were without power as the storms moved through the state on Tuesday morning. Forecasters warned that two inches of rain was possible over a short period of time through Tuesday afternoon.

The Weather Service in Mobile, said two rounds of severe weather were expected on Tuesday through the afternoon.

The service was monitoring a line of storms that were capable of producing winds up to 60 miles per hour and a few tornadoes along the Alabama-Georgia state line on Tuesday afternoon.

Up to three inches of rain was expected, and meteorologists warned of flash flooding. The Weather Service also warned of the possibility of hail the size of pennies.

The Weather Service issued similar forecasts for much of Georgia, southeast South Carolina and the Florida Panhandle for Tuesday.

People rescued from flooding in Texas.

Parts of Texas started the week with a round of severe thunderstorms that set off a wave of warnings that lasted into early Tuesday around the Fort Worth area.

By early Tuesday, more than 23,000 people in Texas were without power, mostly in East Texas, according to PowerOutage.us, which aggregates data from utilities across the United States.

Around 11 p.m. local time on Monday, meteorologists for the Weather Service in Fort Worth alerted residents to a strong line of storms. “Seek shelter on the lowest floor in an interior room now!” they said on Twitter, adding that winds could exceed 80 m.p.h. Soon a flash flood warning was in effect for Dallas County, and forecasters warned drivers not to enter flooded roadways. “Turn around, don’t drown!” they said.

A handful of people were rescued from rising waters in McKinney, about 30 miles north of Dallas, on Monday night, the McKinney Fire Department said on Twitter. A team conducted three water rescues, pulling four people to safety after their cars were swept away. No injuries were reported.

Other storm damage was reported farther east, where a number of trees had fallen on homes.

While storms are not uncommon in parts of the South at any time of year, the peak severe weather season in Alabama, Mississippi and Florida is typically during March, April and May, the Weather Service said.

Over the weekend, severe weather disrupted air travel across the United States, forcing airlines to cancel thousands of flights, The Associated Press reported. Southwest Airlines said that a technology issue and “ongoing weather challenges” were to blame for the disruptions.

Last week, at least two people were killed and two others were injured when a line of storms leveled homes in the Florida Panhandle. A tornado in northwestern Arkansas injured at least seven people, two of them critically, and destroyed part of a school.

And earlier last month, a round of violent storms damaged nine mobile homes and injured six people in Alabama, about 50 miles northeast of Mobile.