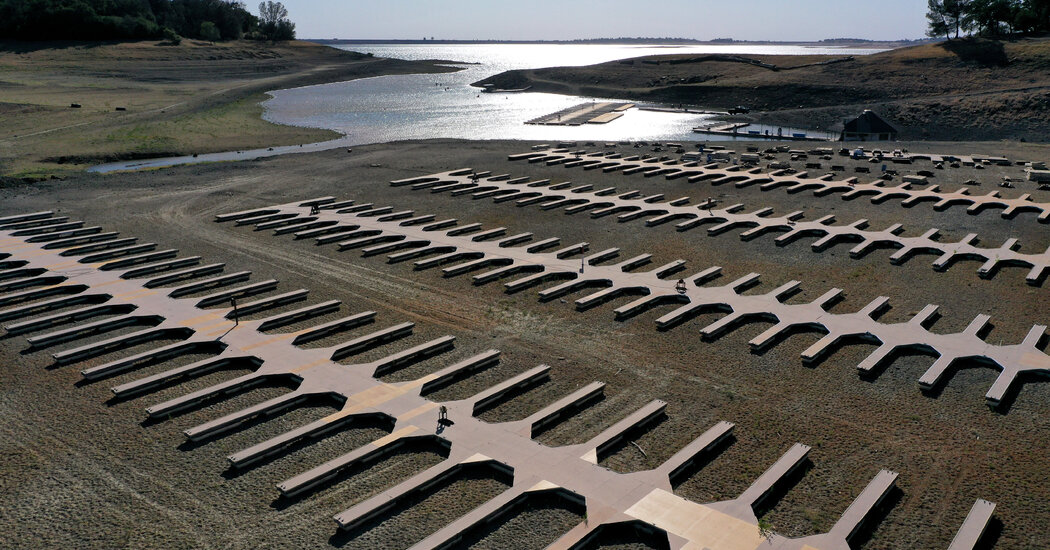 ALBUQUERQUE — This year, New Mexican officials have a message for farmers who depend on irrigation water from the Rio Grande and other rivers: Unless you absolutely have to plant this year, don’t.

Years of warming temperatures, a failed rainy season last summer and low snowpack this winter have combined to reduce the state’s rivers to a relative trickle. The agency that controls irrigation flows on the Rio Grande forced the issue. To conserve water, it opened its gates a month later than usual.

Severe drought — largely connected to climate change — is ravaging not only New Mexico but the entire Western half of the United States, from the Pacific Coast, across the Great Basin and desert Southwest, and up through the Rockies to the Northern Plains.

In California, wells are drying up, forcing some homeowners to drill new ones that are deeper and costlier. Lake Mead, on the border of Arizona and Nevada, is so drained of Colorado River water that the two states are facing the eventual possibility of cuts in their supply. And 1,200 miles away in North Dakota, ranchers are hauling water for livestock and giving them supplemental forage, because the heat and dryness is stunting spring growth on the rangelands.

The most significant, and potentially deadly, effect of a drought that is as severe and widespread as any seen in the West is the wildfires that are raging amid hot and dry conditions. And this is well before the full blast of summer’s heat arrives.

California, Arizona and New Mexico have each had two large blazes, unusual for this early in the year. None has been fully contained, including the Palisades Fire, which has burned 1,200 acres on the outskirts of Los Angeles.

Officials are predicting when the fire season ends — if it ever does, as warming conditions have made fires possible year-round in some areas — the total could exceed last year’s of 10.3 million acres.

“The signals and indications are that we are heading for another very dangerous fire year,” Secretary of Agriculture Tom Vilsack, whose department includes the Forest Service, said last week after he and Interior Secretary Deb Haaland were briefed by experts from the National Interagency Fire Center. “We’re seeing a higher level of risk and an earlier level of risk than we’ve seen in the past.”

Many factors contribute to the frequency, intensity and duration of wildfires, including forest management practices and development. And water shortages are affected by population and economic growth, as well as pumping of groundwater for agriculture and other activities.

Legal constraints play a role, too. One reason for the squeeze on New Mexican farmers this year is that the state owes Rio Grande water to Texas under a 1938 agreement.

But at the root of the drought are warmer temperatures and changing precipitation patterns, which are linked to emissions of carbon dioxide and other greenhouse gases into the atmosphere, where they trap the sun’s heat. The result has been extremely dry conditions that have persisted across much of the Southwest and California for years, and that are spreading throughout the West.

According to the United States Drought Monitor, 84 percent of the West is now in drought, with 47 percent rated as “severe” or “extreme.”

The situation in some states is particularly dire. In Utah, 90 percent of the state is in the two most severe categories; in Arizona, 87 percent; North Dakota, 85 percent; New Mexico, 80 percent; and California, 73 percent.

Experts do not see much prospect for improvement, as another hot and dry summer is forecast. Rather, they expect conditions to worsen.

“We’re entering the climatologically dry period of the year,” said Adam T. Hartman, a meteorologist with the Climate Prediction Center, a part of the National Oceanic and Atmospheric Administration. “That’s a lot of the reason you see drought conditions start to deteriorate.”

The Southwest had its chances to improve starting last summer, a season when atmospheric circulation patterns typically bring tropical moisture to Arizona, New Mexico and parts of nearby states. But these so-called monsoon rains never materialized, and no one is sure exactly why. “It’s a bit of a mystery,” Mr. Hartman said.

This winter’s snowfall, or relative lack of it, didn’t help either. Snowpack totals across the West have been far below normal. In California on April 1, the date when the snow is normally deepest, statewide snowpack was just 59 percent of the historical average.

Relative to the often-soggy conditions in the East, much of the West is normally relatively dry. But with warming, precipitation has become less reliable, said Keith Musselman, a snow hydrologist at the University of Colorado. “These are regions that regularly go weeks without precipitation,” he said. “And now we’re talking in some cases about months.”

In the Southwest, especially, the drought has lingered for so long — since 2000, with only a few wet years sprinkled in — that climate scientists now talk of an emerging “megadrought,” one that may rival those that occurred periodically over the past thousand years. Those Southwestern megadroughts, which were discovered by analyzing ancient tree rings, lasted decades — in one case, 80 years.

California and other Western states rely on the melting of snow for much of their water. Snowpack is essentially a frozen reservoir that is released over time in spring and summer. But that, too, is changing as the West warms.

“There’s two things going on,” Dr. Musselman said. “First, there’s less precipitation. But on top of that there’s this backdrop of warming. That’s altering the delivery of that water.”

More meltwater runs off the mountains sooner, wreaking havoc with the ability to store proper amounts in reservoirs for use during the dry summer. Too much runoff too soon also eventually causes stream flows to drop rapidly.

And low stream flows can lead to a number of other problems, given that shallower water warms more rapidly. In California, for instance, some salmon hatcheries are trucking young fish directly to the ocean this spring, fearing that they wouldn’t survive swimming in the warmer water of rivers that have been affected by drought.

Heat and dryness have a particularly strong effect on the conditions that lead to wildfires, decreasing moisture in the soil and drying vegetation so that it ignites more readily and burns hotter. That can make fires spread more easily.

Severe drought can also result in mass die-offs of trees, providing enormous quantities of fuel for any potential fire. The Forest Service reported one such die-off in April in Arizona, where up to 30 percent of the juniper trees across about 100,000 acres had died from the drought.

Dry conditions can also make warming worse, said Amir AghaKouchak, who studies climate-related and other water resource issues at the University of California, Irvine. Warming causes soil to lose moisture through evaporation, which has a cooling effect on the surface of the ground, much as evaporation of sweat from skin causes a person to cool down. But eventually so much soil moisture is lost that the process stops.

“During droughts, moisture levels become very low, so evaporation doesn’t happen,” Dr. AghaKouchak said. “The skin of the earth warms up, and that warms the atmosphere.”