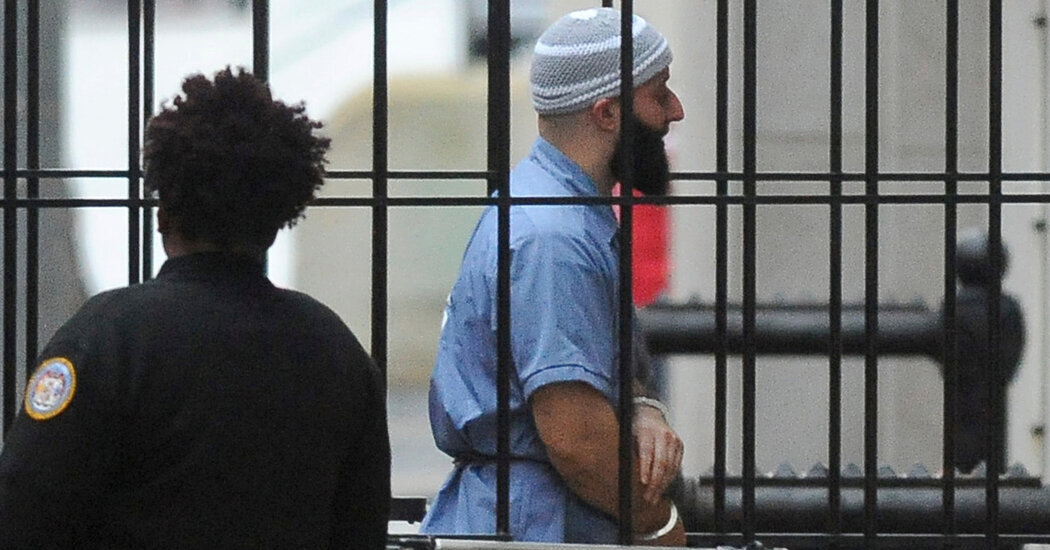 Prosecutors in Maryland have consented to a request by Adnan Syed to conduct new DNA tests on evidence used to convict him of the 1999 murder of Hae Min Lee, a case that intrigued many Americans when it was featured on the hit podcast “Serial.”

In a motion filed on Thursday in the Circuit Court for Baltimore City, prosecutors said that additional forensic testing that had been requested by Mr. Syed was merited in his case because of advances in genetic profiling.

The motion was filed jointly by prosecutors in Baltimore and a lawyer for Mr. Syed, who is serving a life sentence in the killing of Ms. Lee. The body of Ms. Lee, a high school classmate who once dated Mr. Syed, was found in a park in Baltimore County. Mr. Syed was 17 at the time.

Mr. Syed, 40, has steadfastly maintained his innocence and is still seeking to be exonerated. An appeals court vacated his conviction in 2018, ruling that he had received ineffective legal counsel, but Maryland’s highest court overturned that decision in 2019.

Last year, he asked prosecutors to review his sentence under a new law that took effect in Maryland. The law gives prosecutors discretion to modify sentences of offenders who were under 18 at the time of their crimes and have served at least 20 years in prison.

Adnan Syed had been serving a life sentence for the murder of his ex-girlfriend, when a podcast, “Serial,” turned his story into a sensation.

That process typically does not involve a renewed examination of DNA evidence, according to those familiar with the case.

“In the process of reviewing this case for a possible resentencing, it became clear that additional forensic testing — which was not available at the time of the original investigation and trial in this case — would be an appropriate avenue to pursue,” Marilyn Mosby, the Baltimore City state’s attorney, said in a statement on Thursday.

The move comes nearly three years after forensic tests were conducted as part of an HBO documentary series following up on the case. Those tests, while unofficial, did not find any traces of Mr. Syed’s DNA on the many samples taken from Ms. Lee’s body and car during the original investigation.

Prosecutors and Mr. Syed’s lawyer are now seeking a judge’s order to have an independent lab test DNA evidence that was found on Ms. Lee’s body. It was not immediately clear how these tests relate to the ones conducted for the documentary.

Ms. Mosby declined to comment further on the case, which she characterized as a pending investigation.

Erica J. Suter, director of the Innocence Project Clinic and a lawyer for Mr. Syed, commended prosecutors for their willingness to consider new evidence.

“Mr. Syed has been waiting more than two decades for the opportunity to exonerate himself, not just in the court of public opinion, but in the court of law,” Ms. Suter said in a statement. “We applaud the state’s attorney for recognizing the serious concerns in his case, after several months of deliberation and review, and agreeing that DNA testing is needed. We are eager to finally have access to the forensic tools to establish Mr. Syed’s innocence.”

Mr. Syed was convicted of first-degree murder, robbery, kidnapping and false imprisonment in the death of Ms. Lee, who had been strangled and whose body was found in a shallow grave in Leakin Park, at Baltimore’s western edge.

At the time, prosecutors claimed that Mr. Syed had become jealous of Ms. Lee, who had started dating someone else. During the trial, a friend of Mr. Syed said that he had heard him confess to the murder and accompanied him to the park to bury Ms. Lee’s body. But another student, who said that she saw Mr. Syed at the library when Ms. Lee disappeared, was not called to testify.

Focusing on whether Mr. Syed received a fair trial, “Serial” made its debut in 2014. The series was downloaded more than 175 million times and won a Peabody Award.

In 2020, The New York Times Company bought Serial Productions, the company behind the podcast, bringing the storytelling giant into The Times’s growing portfolio of digital journalism.