Senators say US donating vaccines to Taiwan amid China row 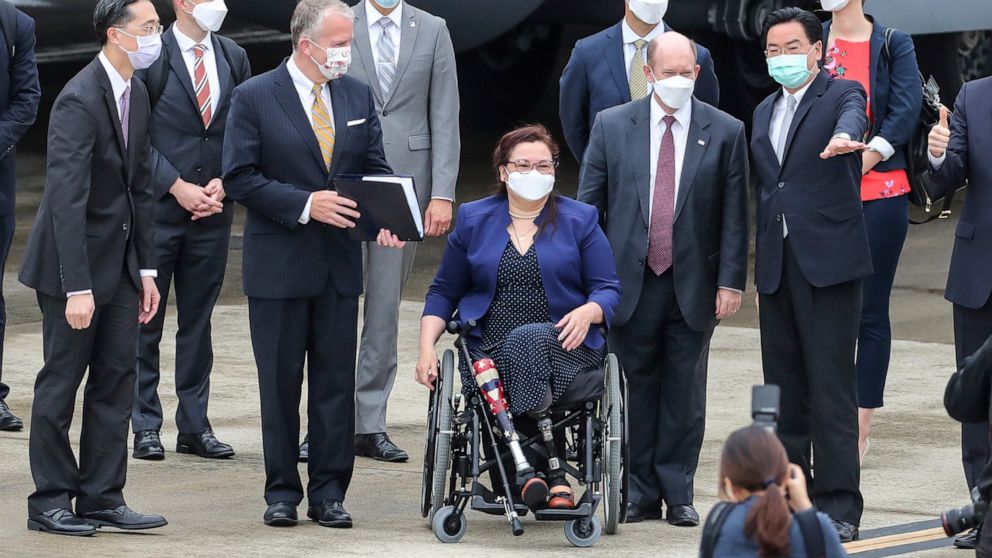 TAIPEI, Taiwan — The U.S. will give Taiwan 750,000 doses of COVID-19 vaccines, part of President Joe Biden’s move to share millions of jabs globally, three senators said Sunday, after the self-ruled island complained that China is hindering its efforts to secure the injections amid an outbreak.

Democratic Sen. Tammy Duckworth of Illonois, who arrived in Taiwan with her two colleagues, said the trip underscores the bipartisan support for the democratic island that Beijing claims as its own renegade territory.

“We are here as friends, because we know that Taiwan is experiencing a challenging time right now, which was why it was especially important for the three of us to be here in a bipartisan way,” said Duckworth.

“It was critical to the United States that Taiwan be included in the first group to receive vaccines, because we recognize your urgent need, and we value this partnership.”

Taiwan’s Foreign Minister Joseph Wu received the senators at the airport said he was “delighted” to welcome them and thanked them for their staunch support.

“Taiwan is facing unique challenges in combating the virus,” he said. “While we are doing our best to import vaccines, we must overcome obstacles to ensure that these life-saving medicine are delivered free from troubles of Beijing.”

He said China continues to try block Taiwan’s international assistance and prevent it from participating in the World Health Organization. “We are no strangers to that kind of obstructionism,” he said.

Wu said Taiwan was fortunate to have many like-minded countries showing their support, which he said is about sustaining freedom and democracy in the face of autocracy.

China has in recent months increased pressure on the island, including flying warplanes into Taiwan’s airspace.

Taiwan and China split amid civil war in 1949, and most Taiwanese favor maintaining the current state of de facto independence while engaging in robust economic exchanges with the mainland.

But vast improvements in China’s military capabilities and its increasing activity around Taiwan have raised concerns in the U.S., which is legally bound to ensure Taiwan is capable of defending itself and to regard all threats to the island’s security as matters of “grave concern.”

Taiwan, which has weathered virtually unscathed the initial outbreak last year, is now facing its most serious flare-up with over 10,000 cases since the end of April.

On Friday, Japan donated 1.24 million doses of the AstraZeneca vaccine to Taiwan.

Biden announced last week the U.S. will swiftly donate an initial allotment of 25 million doses of surplus vaccine overseas through the U.N.-backed COVAX program, which to date has shared just 76 million doses with needy countries. Overall, the White House has announced plans to share 80 million doses globally by the end of June, most through COVAX.

The Thai-born Duckworth said the American donation also reflects gratitude for Taiwan’s support for the U.S., as Taiwan donated personal protective equipment and other supplies to the U.S. in the early days of the pandemic.

The three senators plan to meet Taiwan President Tsai Ing-wen and senior government officials to discuss U.S.-Taiwan relations and other issues during their one-day trip.