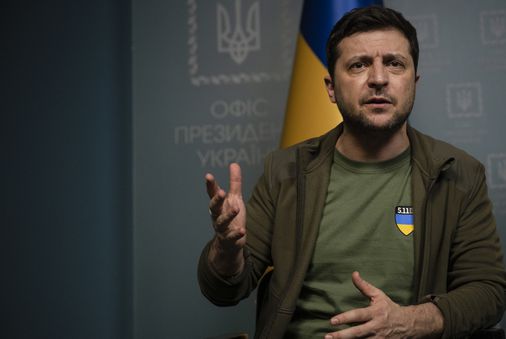 A presentation that Ukrainian President Volodymyr Zelensky gave to US lawmakers on Saturday led to some criticism of the attendees, with three senators seen as committing miscues during the talk.

Shortly after the meeting began, Senator Marco Rubio, a Republican representing Florida, and Senator Steve Daines, a Republican from Montana, shared images of Zelensky on the Zoom call. The posting of the images was met with swift backlash and questions about whether Zelensky’s safety and location had been compromised, as other lawmakers in attendance said they had specifically been asked not to share information publicly during the call.

The Ukrainian Ambassador very intentionally asked each of us on the zoom to NOT share anything on social media during the meeting to protect the security of President Zelenskyy. Appalling and reckless ignorance by two US Senators. https://t.co/geolhKxbLp

Zelensky also reportedly asked US Senator Rick Scott, a Republican representing Florida, to mute himself at one point during the call.

At one point during his emotional presentation, Zelensky paused to ask one of the American lawmakers to mute themselves.
“Senator Rick Scott, please mute your mic,” he said. https://t.co/ElfsEAtQ4y

Zelensky was speaking to more than 300 members of Congress, imploring them to ban the importation of Russian oil and to send more jets to his country, according to lawmakers on the call. The meeting, conducted via Zoom, was the first time Zelensky had addressed both houses of Congress since Russia’s invasion of Ukraine.

A statement from Rubio spokesperson Dan Holler said that there was “no identifying information” in the image.

“There were over 160 members of Congress on a widely reported Zoom call. There was no identifying information of any kind. Anybody pretending this tweet is a security concern is a partisan seeking clicks,” the statement said.

Material from The New York Times wire service was used in this report.

Lauren Booker can be reached at lauren.booker@globe.com.