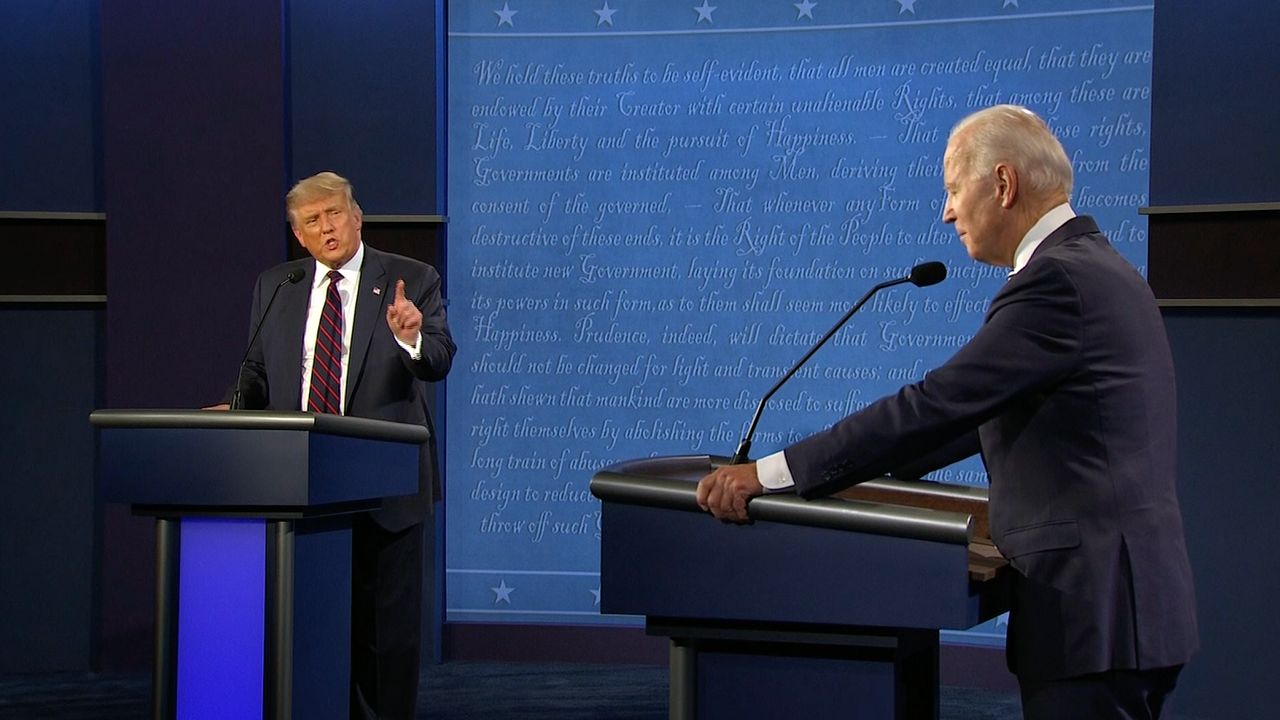 Rather, the former Vice President’s campaign said that the candidate will “will find an appropriate place to take questions from voters directly on October 15th.”

What You Need To Know

The nonpartisan Commission on Presidential Debates made the announcement Thursday morning, a week before the two were scheduled to face off in Miami. The candidates will “participate from separate remote locations,” while the participants and moderator remain in Miami, the commission said.

Shortly after news broke, Trump said on Fox Business, “That is not acceptable to us. I’m not going to do a virtual debate. I am not going to waste my time.”

Trump’s campaign manager, Bill Stepien, said shortly after: “We’ll pass on this sad excuse to bail out Joe Biden and do a rally instead.”

“President Trump won the first debate despite a terrible and biased moderator in Chris Wallace, and everybody knows it,” Stepien claimed in a statement. “For the swamp creatures at the Presidential Debate Commission to now rush to Joe Biden’s defense by unilaterally canceling an in-person debate is pathetic. That’s not what debates are about or how they’re done. Here are the facts: President Trump will have posted multiple negative tests prior to the debate, so there is no need for this unilateral declaration. The safety of all involved can easily be achieved without canceling a chance for voters to see both candidates go head to head. We’ll pass on this sad excuse to bail out Joe Biden and do a rally instead.”

It remains to be seen what will happen if Trump follows through on his threat to not participate.

Biden’s deputy campaign manager Kate Bedingfield said in a statement that “Joe Biden was prepared to accept the CPD’s proposal for a virtual Town Hall, but the President has refused, as Donald Trump clearly does not want to face questions from the voters about his failures on COVID and the economy.”

“As a result, Joe Biden will find an appropriate place to take questions from voters directly on October 15th, as he has done on several occasions in recent weeks,” Bedingfield continued.

The campaign also expressed hope that the debate would be rescheduled: “Given the President’s refusal to participate on October 15th, we hope the Debate Commission will move the Biden-Trump Town Hall to October 22nd, so that the President is not able to evade accountability. The voters should have a chance to ask questions of both candidates, directly. Every Presidential candidate since 1992 has participated in such an event, and it would be a shame if Donald Trump was the first to refuse”

Speaking to reporters earlier Thursday, Biden said it would be “irresponsible” to comment on Trump’s threats to not participate in the debate, saying “he changes his mind every second.”

“We don’t know what the president is going to do—he changes his mind every second. For me to comment on that now would be irresponsible,” Biden said, adding that he has not decided his next move. “If he goes off and he’s going to have a rally, I’ll … I don’t know what I’ll do.”

“You never know what’s going to come out of his mouth,” Biden said to ABC News’ Molly Nagle.

Earlier in the day, the Biden campaign released a statement about the debate: “Vice President Biden looks forward to speaking directly to the American people and comparing his plan for bringing the country together and building back better with Donald Trump’s failed leadership on the coronavirus that has thrown the economy he inherited into the worst downturn since the Great Depression.”

Biden, for his part, said he and Trump “shouldn’t have a debate” as long as the president remains COVID positive.

Biden told reporters in Pennsylvania that he was “looking forward to being able to debate him” but said “we’re going to have to follow very strict guidelines.”

Trump fell ill with the virus last Thursday, just 48 hours after debating Biden in person for the first time in Cleveland. While the two candidates remained a dozen feet apart during the debate, Trump’s infection sparked health concerns for Biden and sent him to undergo multiple COVID-19 tests before returning to the campaign trail.

Trump was still contagious with the virus when he was discharged from Walter Reed National Military Medical Center on Monday but his doctors have not provided any detailed update on his status. According to the Centers for Disease Control and Prevention, those with mild to moderate symptoms of COVID-19 can be contagious for as many as — and should isolate for at least — 10 days.

It’s not the first debate in which the candidates are not in the same room. In 1960, the third presidential debate between Richard Nixon and John F. Kennedy was broadcast with the two candidates on opposite coasts.