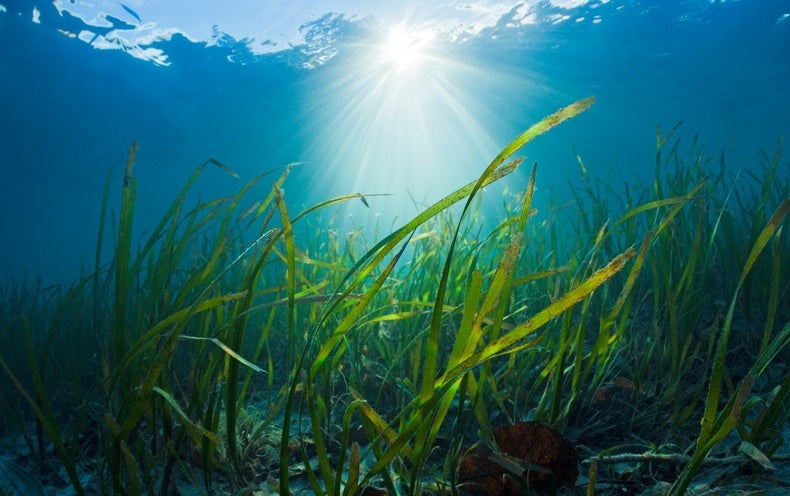 Vast underwater meadows of gently waving sea grass stand sentinel for hundreds of miles up and down the West Coast.

These blue-green fields perform a variety of important services: They protect the shoreline from erosion, clear pollutants from the water and provide habitat for all kinds of marine animals.

The study published last week in the journal Global Change Biology finds that sea grass forests can raise pH levels in coastal waters. As they perform photosynthesis, they remove carbon dioxide from the water, counteracting the acidifying effect of the gas.

“I think we are all very excited about it,” said lead study author Aurora Ricart, a scientist at the Bigelow Laboratory for Marine Sciences in Maine. “Because it can really work.”

Ocean acidification is a side effect of rising carbon dioxide levels in the atmosphere. Some of this CO2 dissolves out of the air and into the sea, spurring a chemical reaction that lowers the water’s pH. Scientists sometimes refer to it as global warming’s “evil twin”—an invisible companion to climate change.

Ocean acidification can have harmful effects on marine organisms like shellfish and coral by preventing them from properly forming the hard shells they need to survive. It’s a threat both to natural ecosystems and to shellfish fisheries in the U.S. and elsewhere around the world.

The study presents a natural way to address the problem.

Researchers analyzed six years of data from sea grass meadows spanning more than 600 miles off the California coastline. It focused on the common eelgrass, one of the most widespread sea grass species on the West Coast. The authors claim it’s the largest, most comprehensive study of its kind.

The study finds that sea grass ecosystems can raise pH levels by more than 0.1 unit, equivalent to about a 30% decrease in acidity.

The effect isn’t constant. It comes in waves and is influenced by temperature, daylight, ocean currents and other factors that affect water chemistry and seagrass photosynthesis rates. But the tempering influence on acidification can be lasting, sometimes persisting for up to three weeks at a time.

The study found that pH was higher in sea grass ecosystems, compared to nearby areas with no sea grass, about 65% of the time.

The study didn’t investigate the effects of higher pH on marine organisms—that’s a question for future research. But there’s reason to believe these meadows may have a positive influence on shellfish and other ocean animals.

If sea grass meadows can raise the water’s pH to more normal levels, they could help prevent some of these harmful effects, she suggested.

If that’s the case, protecting and restoring coastal vegetation could be a key strategy in combating ocean acidification. It’s not a substitute for reducing greenhouse gas emissions, but it could be an extra tool to mitigate the damage that’s already been done.

The new study isn’t the first of its kind. Previous research has pointed to similar effects in sea grass meadows, kelp forests and other vegetation in coastal ecosystems around the world.

Other studies on the West Coast and in the Mediterranean Sea have also had promising results.

“Of course more studies are needed,” Ricart said. “But yeah, it’s exciting to see that different research groups in different countries are all kind of seeing the same. That’s very promising.”