School Bus Industry in Crisis Because of Coronavirus 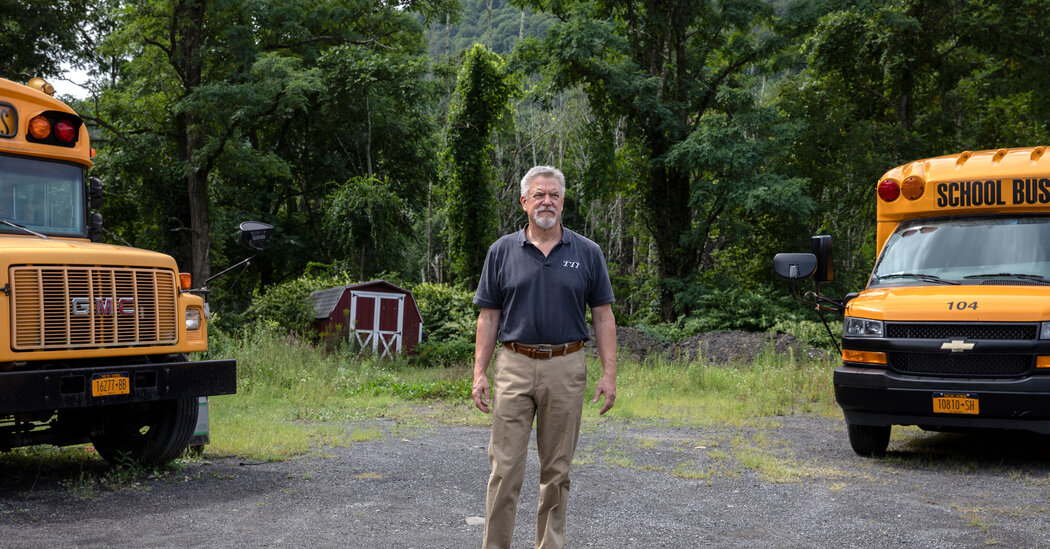 WASHINGTON — When Glenn Every received notice in early March that schools in the Hudson Valley of New York would close because of the coronavirus pandemic, he parked his fleet of 20 school buses thinking they would be running again in a few months.

But the pandemic worsened, and schools remained shuttered. School administrators told Mr. Every that if students stayed home, they could not pay buses to remain idle. His costs remained, and any chance of making up for lost revenue with after-school or summer contracts were wiped away by the pandemic.

To stay afloat, he furloughed nearly all 32 of his staff members, including his son. All told, his company has lost $750,000 because of the pandemic, a critical blow for his business, which averages $2 million a year in revenue.

Now, Mr. Every worries that when schools are able to reopen fully, his company may not be there to take children to class.

Privately owned bus companies, which carry nearly 10 million children to school a year, account for roughly 40 percent of the school bus industry — and now are facing an unparalleled threat to their survival.

In school districts that are adopting remote learning, bus companies worry about getting any income at all. In places that are returning fully to in-person instruction or a hybrid model, companies project increased cleaning costs and operational overhead expenses that will skyrocket because of the need to run more buses to ensure students remain socially distanced.

In response, bus company owners and industry leaders are urging Congress to pass $10 billion in emergency aid to prop up school buses and motor coaches. They note that with the unpredictability of the new academic year, in addition to nearly six months of being out of business, they do not know how much longer they can remain open.

As schools reopen — and if, as predicted, school bus companies start to fold — industry leaders say it will be the nation’s schoolchildren and parents who will suffer, having to alter their lives and figure out how to replace a mode of transportation that was once a certainty.

Since the pandemic began, nearly every mode of public transportation in the United States has been financially crippled by reduced ridership and declining revenue. To stave off collapse, Congress earmarked $50 billion for airlines, $25 billion for public transit and $1 billion for Amtrak.

But privately operated buses were largely left out of the relief, industry experts said. The remaining 60 percent of school buses are owned and operated by school districts.

Federal lawmakers gave school districts $13.5 billion in aid to weather the pandemic, but lawmakers left it up to district administrators to decide whether to pay their private contractors, including school buses.

Governors in states like Connecticut and Minnesota urged districts to pay school bus contractors enough to cover fixed costs that they incurred even if buses sat idle. But some school districts in states like Pennsylvania and New York are forgoing their payments to bus companies altogether, causing some to go bankrupt or sue districts for over $2 million in unpaid bills.

The industry could be affected forever, experts say. Smaller bus companies have tapped deep into their savings to weather a summer with no revenue, putting them near financial collapse. Bus drivers who were laid off have flocked to industries like trucking and package delivery, making it difficult for companies that need to drive students in the fall to recruit the staff members they now need.

“Once it falls apart,” said Kyle DeVivo, a bus advocate and an assistant vice president of DATTCO, Inc., a bus company in Connecticut, “good luck putting it back together.”

Federal lawmakers recognized that the bus industry needed more attention from Congress. In April, nearly 100 members of Congress sent a letter to House and Senate leadership asking them to rectify the “grave oversight” of leaving the American bus industry out of the $2 trillion coronavirus aid package passed in March.

In early July, a bipartisan group of senators introduced the Coronavirus Economic Relief for Transportation Services Act, which would provide $10 billion in emergency grants to school bus and motor coach companies. There has been no movement on the bill.

“These bus operators provide essential transportation services for millions of Americans,” said Senator Jack Reed, Democrat of Rhode Island and the lead sponsor of the legislation. “If the federal government fails to act, it will be hard to jump-start the economy when demand for transportation revs back up.”

The realities of running a school bus company during the pandemic pose a challenge.

Many states require buses to be no more than four to six years old, causing many companies to carry a constant loan payment on their fleet. An average school bus costs $90,000 to $120,000 to buy, according to industry experts. Monthly insurance premiums can range from $2,500 to $4,000 per bus, experts said. If buses remain idle, the likelihood of mechanical failure increases.

“It’s been a nice combination,” Mr. Every said of having a business that relied on a mix of school bus and motor coach revenue. “Now I walk out and say, ‘Wow, look at all these parked buses.’”

Another casualty has been the widespread layoffs of bus drivers. Amalgamated Transit Union, one of the largest unions representing school bus drivers, estimates nearly 13,000 of a work force of 20,000 have been furloughed, or about 65 percent.

For bus drivers like Dena Drake, 45, who was laid off from her bus route outside Chicago, there is no idea when she will go back to work.

Ms. Drake, who is the main breadwinner in her family and a third-generation bus driver, got into the job because she felt it was one “that wouldn’t go away.” But if her school bus company does not require drivers until October at the earliest, she is not sure if she will be able to stay in the industry.

“I do feel we are forgotten,” she said. “Once we don’t have school, we really don’t have money.”

Experts caution that once a bus company closes, it is not easy for administrators to replace them with another contractor. Many private bus companies have been around for generations and have built expertise in recruiting and training drivers to operate in a highly regulated industry.

New guidelines from the Centers for Disease Control and Prevention also require bus companies to modify their operations to allow for daily cleaning and social distancing to ensure the safety of their children and drivers.

“It’s not just anyone we want to entrust our kids to,” said Mike Canine, a school bus advocate who works for Lorenz Bus Service in Minneapolis. “These are highly trained professionals.”