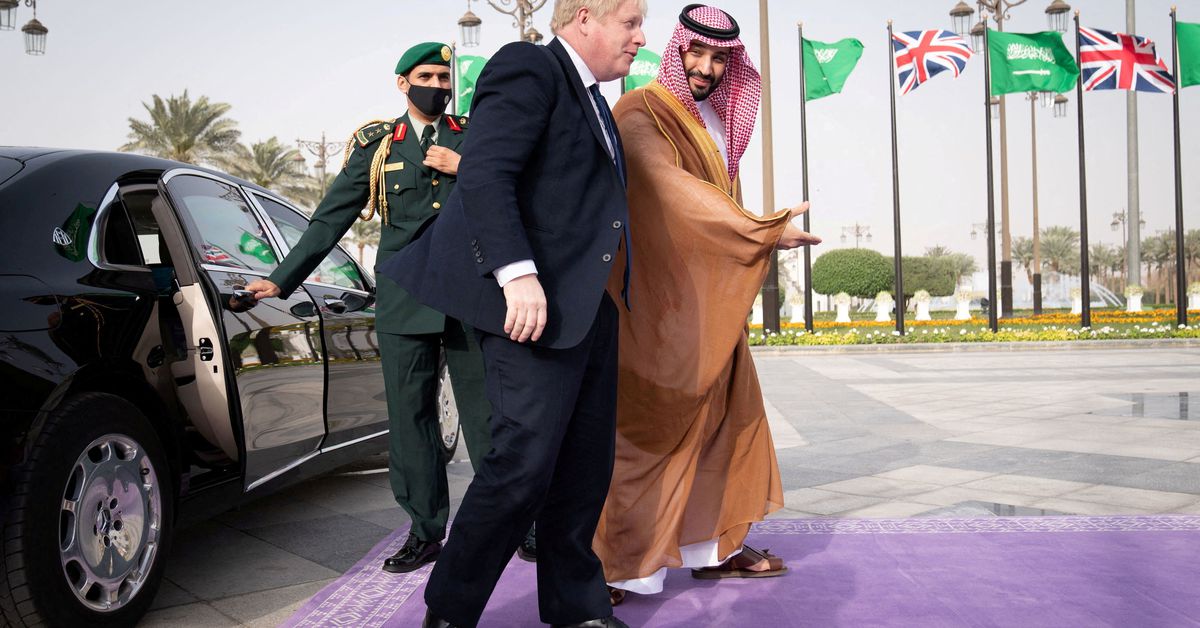 RIYADH, March 16 (Reuters) – The United States and Britain are ramping up pressure on Saudi Arabia to pump more oil and join efforts to isolate Russia, while Riyadh has shown little readiness to respond and has revived a threat to ditch dollars in its oil sales to China.

Saudi Arabia and its neighbour the United Arab Emirates, which are among just a handful of producers with spare capacity, have snubbed Western calls for more crude to cool red-hot prices and have stuck to an OPEC+ supply pact with Russia and others.

With U.S-Saudi relations at a low point, MbS has responded by strengthening ties with Russia and China, even though the kingdom still has close security ties with Washington.

McGurk and other U.S. officials met senior Saudi officials on Tuesday, pressing them to pump more oil and find a political solution to end the war in Yemen, where Saudi-led forces are battling the Iran-backed Houthi group, two sources said.

“You would be wrong if you think Washington would give up on these two files,” one of the two sources, who is familiar with the discussions, told Reuters.

A senior U.S. administration official said McGurk was in the Middle East “discussing a wide range of issues, including Yemen”, but declined to elaborate.

The British prime minister, meanwhile, described Saudi Arabia and the UAE as “key international partners” in the effort to wean the world off Russian hydrocarbons and put pressure on Russian President Vladimir Putin after Moscow invaded Ukraine.

But Abdulkhaleq Abdulla, a prominent Emirati political analyst, said Johnson should not expect much. “Boris will go back empty handed,” he wrote on Twitter.

The Saudi government did not immediately respond to a Reuters request for comment on the U.S. and British visits.

For now, Saudi Arabia has shown no sign of abandoning an oil supply pact forged between the Organization of the Petroleum Exporting Countries and allies, including Russia, which has seen the group known as OPEC+ hiking oil output only gradually.

At the last OPEC+ meeting on March 2 – less than a week after Russia invaded Ukraine and as the West ratcheted up sanctions on Moscow – ministers dodged the Ukraine issue in talks and swiftly agreed to stick to existing policy. read more

Meanwhile, Riyadh has signalled it wants closer ties with Beijing by inviting Chinese President Xi Jinping to visit this year. The Wall Street Journal said Saudi Arabia was in talks to price some crude it sells to China in yuan. read more

“If Saudi Arabia does that, it will change the dynamics of the forex market,” said a source with knowledge of the matter, adding that such a move – which the source said Beijing had long requested and which Riyadh threatened as far back as 2018 – might prompt other buyers to follow.

The Saudi energy ministry declined to comment, while state oil giant Saudi Aramco did not respond to a request for comment.

One diplomat said Riyadh was turning to “old threats” to push back at the West, although the diplomat and others say any shift to the yuan would face practical challenges, given crude is priced in dollars, the Saudi riyal is pegged to the greenback and the yuan does not boast the same role as a reserve currency.

“It would be reckless, given global oil pricing in dollars and the currency peg, not to mention the amount of Saudi debt priced in dollars, its reserve assets in dollars and their holdings of U.S. equities,” said Karen Young, a resident scholar at the American Enterprise Institute.

“There may be some contracts in yuan between Saudi Arabia and China, but there is no reorientation of Saudi monetary policy,” she said.

The Saudi central bank had assets worth $492.8 billion at the end of January, including $119 billion in U.S. Treasuries.

The government had foreign currency debt – mostly in dollars – of $101.1 billion at the end of 2021, while the Saudi sovereign wealth fund held $56 billion in U.S. equities.

Monica Malik, chief economist at Abu Dhabi Commercial Bank, said Saudi Arabia could slowly shift some sales to yuan. “A gradual shift would have a limited impact,” she said.

And even as U.S. officials were meeting in Riyadh, the U.S. State Department said on Tuesday that Washington was not asking its allies to choose between the United States and China.