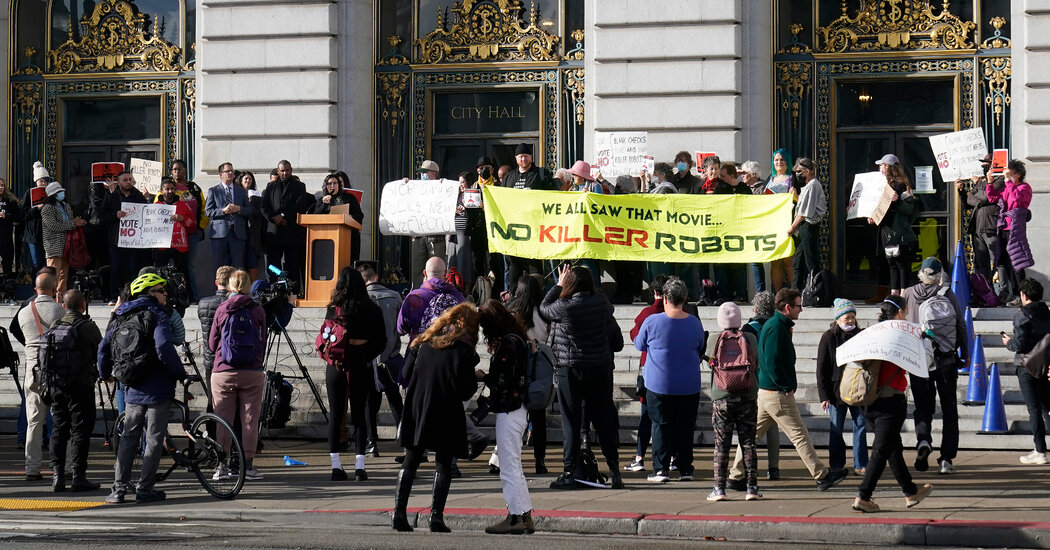 Facing backlash from activists and constituents, city supervisors in San Francisco on Tuesday backpedaled on a policy that would allow the police to use robots to deploy lethal force.

The San Francisco Board of Supervisors had originally advanced the policy by an 8-to-3 vote last week. Supporters said that the measure would allow the police to use a robot with deadly force in extreme circumstances, such as when a mass shooter or a terrorist is the focal danger.

But an outpouring of criticism from those who said the move would be too dangerous appeared to have changed supervisors’ minds before the second required vote, which typically mirrors the first. The reversal was a rarity in Bay Area politics.

“I’m feeling very grateful to all the community members and civil rights leaders who spoke up and successfully persuaded the board of supervisors to change course here,” Dean Preston, a supervisor who opposed the deadly robot policy in the first vote, said in an interview.

The board on Tuesday voted 8 to 3 to amend the policy. While it will still allow the Police Department to use remote-controlled robots, a provision now states that the robots cannot be used with deadly force. The board unanimously approved the policy as amended.

The supervisors also sent the original deadly robot provision back to the board’s rules committee, which may hold public hearings on the matter and further consider it.

The Police Department did not immediately respond to an email seeking comment.

The policy was developed in response to a state law enacted last year that required law enforcement agencies across California to seek the approval of their local governing bodies to use military-style equipment.

The proposed policy last month propelled San Francisco into the forefront of a national debate about the use of weaponized robots in American cities, as the country confronts mass shootings — which some officers argue could be addressed with robots — and police brutality — which opponents of weaponized robots say could be worsened with them.

There is a precedent for robots being lethally used by law enforcement. In 2016, the Dallas Police Department ended a standoff with a gunman suspected of killing five officers by blowing him up with a bomb attached to a robot in what was believed to be the first lethal use of the technology by an American law enforcement agency.

Trying to garner support for the policy, David Lazar, assistant chief of the San Francisco Police Department, cited as an example the gunman who opened fire from his Las Vegas high-rise hotel room in 2017, killing 60 people in the deadliest mass shooting in modern U.S. history.

Mayor London Breed, a Democrat, had expressed support for the original proposal last month. Her spokesman, Jeff Cretan, said in an email on Tuesday that Mayor Breed and her office understood that there would be “ongoing debate” about the robots and lethal force.

Most supervisors were quick to reverse course this week.

Mr. Preston said his fellow supervisors had heard from people in San Francisco and across the country that the proposed policy “was a mistake.”

On Monday, activists held a rally against the policy outside the steps of City Hall.

Mr. Preston said he believed the supervisors who changed their minds on Tuesday may not have “necessarily thought through all the implications” of the policy beforehand.

One of the supervisors who changed his mind, Gordon Mar, who oversees District 4, said in an interview that over the past week he had grown “increasingly uncomfortable” with enacting a law that would “give the power of human life to a remote control.”

“I do not think arming robots and giving them a license to kill will make us safer,” Mr. Mar said. “I think because of a lot of public comments and the attention that this has received nationally, it led me to think about the implications of this policy and the precedent that San Francisco could be setting.”