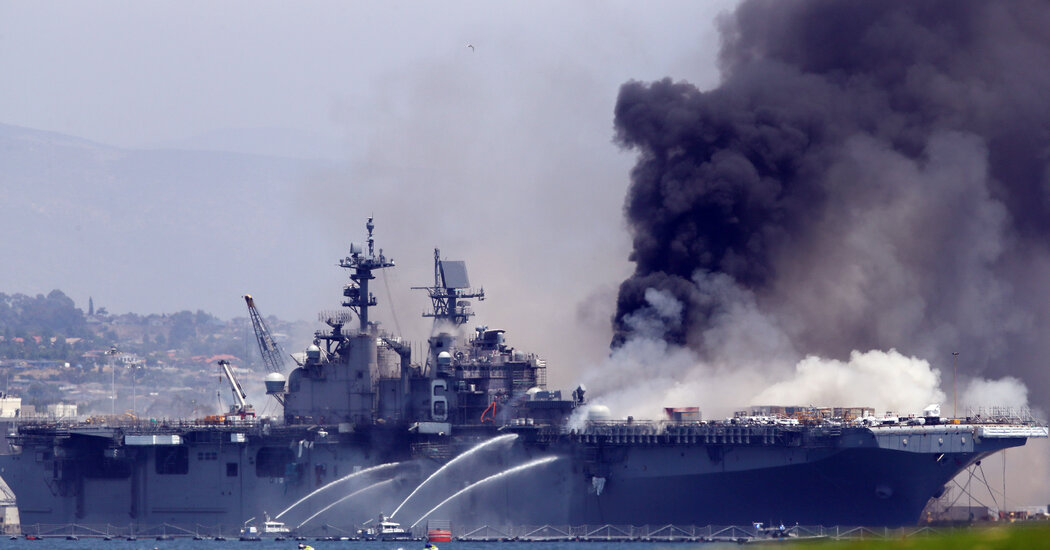 A sailor is being investigated for arson in the fire that engulfed the warship U.S.S. Bonhomme Richard in July, according to a senior Navy official who did not want to speak publicly during the inquiry.

The arson investigation was separately confirmed by a Department of Defense official who was not authorized to speak with reporters.

There were no fatalities from the fire, but 68 military and civilian firefighters were treated for injuries including heat exhaustion and smoke inhalation.

The fire that rendered the ship inoperative began on July 12 while it was pierside at a Navy base in San Diego. More than 400 sailors from 16 nearby ships fought the blaze, which reached temperatures of 1,000 degrees Fahrenheit and took four days to extinguish.

The Pentagon declined to answer questions about the investigation, which was first reported by ABC 10 News in San Diego.

“The Navy will not comment on an ongoing investigation to protect the integrity of the investigative process and all those involved,” said Lt. Tim Pietrack, a Navy spokesman. “We have nothing to announce at this time.”

A spokeswoman for Naval Surface Force Pacific, which is leading the investigation into the fire’s cause, also declined to comment.

The fire that consumed the ship broke out on a Sunday morning, when fewer than 200 sailors were on board, and spread rapidly. Initial firefighting efforts were halted after an explosion occurred inside the ship, forcing the sailors to temporarily withdraw for safety reasons.

The Bonhomme Richard was undergoing a lengthy maintenance period at the time, following years of being deployed in Japan. Navy officials have said that the fire started in an area where Marines would typically park trucks like Humvees while at sea, but that it might have been temporarily filled with combustible materials as shipyard workers moved items around.

Besides the criminal investigation, the Navy is looking into whether proper safety precautions were being followed before the fire began.

An amphibious assault ship, the Bonhomme Richard is designed to carry thousands of Marines and deploy them from landing craft and helicopters. With an 800-foot flight deck, it can also launch and recover attack aircraft like the F-35 Joint Strike Fighter.

Although the ship’s engines and propulsion systems were untouched by the blaze, the rest of the vessel is largely gutted and the Navy’s top officer, Adm. Michael M. Gilday, has said that its future as a commissioned warship is uncertain.