Russia’s War in Ukraine Sends Tremors into the Arctic 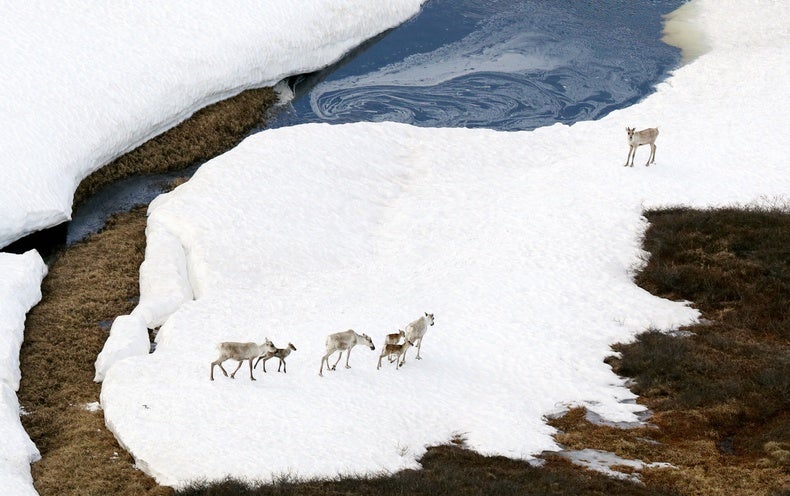 Diplomatic tensions over Russia’s invasion of Ukraine are affecting the farthest reaches of the Northern Hemisphere.

Seven of the Arctic Council’s eight members — all except Russia, which currently holds the council’s rotating chairmanship — have agreed to boycott future meetings.

“We remain convinced of the enduring value of the Arctic Council for circumpolar cooperation and reiterate our support for this institution and its work,” the seven nations said in a joint statement released March 3. “We hold a responsibility to the people of the Arctic, including the indigenous peoples, who contribute to and benefit from the important work undertaken in the Council.”

Russia’s attack on Ukraine constitutes a “flagrant violation” of the council’s core principles of sovereignty and territorial integrity, they added. The pause will remain in place while the members consider how to move forward with future proceedings. It’s unknown how long it will last.

Over the years, the council has negotiated legally binding agreements on search and rescue efforts, oil pollution responses, and scientific research activities in the Arctic. It’s also introduced frameworks for marine conservation and sustainable development, and it’s compiled reports on biodiversity, pollution and climate change.

The boycott casts uncertainty on the future of ongoing council projects. Many of them involve environmental issues or concerns related to climate change — a pressing issue for the rapidly warming Arctic, where temperatures are rising nearly three times faster than the global average.

Several projects launched in the last few years have targeted the growing problem of Arctic wildfires, which are intensifying as the region warms.

The Arctic Wildland Fire Ecology Mapping and Monitoring Project, also known as the Arctic Fire project, maps out the area burned by wildfires each year in an effort to evaluate their impact on Arctic ecosystems and communities. And the Circumpolar Wildland Fire Project aims to coordinate wildfire response efforts among Arctic communities. Both projects are led by Gwich’in Council International (GCI), a permanent participant of the Arctic Council representing Gwich’in communities across Alaska and Canada.

In recent years, Arctic wildfires have poured record-breaking volumes of carbon dioxide into the atmosphere as they’ve burned through the region’s carbon-rich peatlands. Scientists have warned that the rising frequency of wildfires could also speed up the thawing of Arctic permafrost.

Studies have shown that wildfires can dramatically transform Arctic ecosystems. Some of the region’s iconic black spruce forests are giving way to faster-growing deciduous trees after they burn.

It’s unclear now whether these projects will be able to move forward as long as there’s a pause on Arctic Council activities.

“We know that a cooperative response will be necessary given the increasing size, scope, and implications of wildland fire management in a warming climate — fires are impacting each Arctic state, and communities in the Arctic in a variety of ways,” Devlin Fernandes, executive director of GCI, said in an email to E&E News. “How exactly the pause will impact cooperation, participation, information sharing, understanding, and working together in the medium-long term is yet to be determined.”

The wildfire projects are a prime example of the Arctic Council’s role in facilitating international cooperation on important emerging issues in the Arctic, according to Troy Bouffard, director of the Center for Arctic Security and Resilience at the University of Alaska, Fairbanks. Bouffard has contributed to the Circumpolar Wildland Fire Project as a part of the Arctic Council’s Emergency Prevention, Preparedness and Response Working Group.

“It hurts because we were doing fantastic work and important work,” he said. “And now we have to pause.”

Other Arctic Council projects have been monitoring weather events, tracking the changing climate, evaluating the resilience of Arctic ecosystems, assessing the impact of various kinds of pollution and working on clean energy projects.

An extended pause on Arctic Council activities could be a major interruption to these efforts, said Michael Sfraga, chair of the Polar Institute at the Woodrow Wilson International Center for Scholars and chair of the U.S. Arctic Research Commission. It could also delay the release of reports summarizing scientific findings and offering recommendations for future action.

“Any gap in either data collection, data monitoring and data sharing, which then becomes the reports, is of particular concern to me,” Sfraga said. “We still don’t know how long this pause will be.”

The current situation is unprecedented in the history of the Arctic Council.

“No one 25 years ago saw something like this occurring,” he told E&E News. “The North has always been considered to be relatively peaceful, cooperative, integrated, and we’ve been able to put our differences aside and work on the North.”

It’s unclear if council activities can proceed without Russia. When the council was established nearly 30 years ago, “no such kind of language existed to guide these circumstances,” Bouffard said.

At the same time, the interconnected nature of the Arctic makes it difficult to proceed with certain kinds of research without Russian collaboration, he added.

Thawing Arctic permafrost, for instance, is a growing concern for Arctic communities and climate scientists alike. Permafrost releases large volumes of carbon dioxide and methane as it thaws, meaning it could further speed up global climate change as it warms. It also softens the ground, threatening the stability of buildings and other infrastructure.

Monitoring the response of Arctic permafrost to continued warming is a major priority for Arctic scientists. But much of the world’s permafrost is located in Russia.

“Their knowledge and experience in science alone is vital,” Bouffard said. “We need to work together. This is one area that’s near and dear and real to us right now, that we need to be working on more together and not less.”

There are other important environmental issues that require continued dialogue between Russia and other Arctic nations, said Andreas Østhagen, a senior fellow at the Arctic Institute’s Center for Circumpolar Security Studies and a senior research fellow at the Fridtjof Nansen Institute in Norway.

Managing Arctic fisheries is a prime example, he said. It’s necessary for Arctic nations to work together to enforce catch limits and other sustainable fishing practices in order to keep fish stocks from declining or collapsing.

Russia also transports nuclear waste for disposal through waters bordering the Norwegian coastline, Østhagen added. It’s important to keep the channels of communication open for Norway to be notified if any wrecks or leaks should occur.

“You can’t stop that stuff, even with stuff going on in other parts of the world,” Østhagen said. “Right now, some things you should work hard to keep going.”

Such is the nature of the Arctic Circle. Connected by a common ocean, environmental and economic concerns in one area are likely to have cascading effects throughout the region.

It also means that one nation’s military conflict has the potential to affect the entire region. Russia’s invasion of Ukraine raises security concerns for all Arctic nations.

In a worst-case scenario, should the war in Ukraine significantly escalate and spill into other nations, “then I think we would very quickly see military activity in the European parts of the Arctic because of its importance to the northern fleets,” Østhagen said.

Even if the war remains geographically contained, he added, it raises concerns that small-scale conflicts involving Russia in the Arctic — a fisheries dispute, for instance — could disproportionately escalate in the future.

“We have to be prepared, and we have to assume that there might be deliberate attempts by Russia to undermine Arctic cooperation or NATO’s cooperation in the Arctic, and use the Arctic to gain some sort of benefit that we are probably unable to see,” Østhagen said.

The fracturing of the Arctic Council doesn’t directly affect these security concerns. Military and security issues are generally beyond the purview of the council, Østhagen added.

And these concerns were already bubbling before the onset of all-out war in Ukraine. Russia began staging a number of military drills in the Arctic earlier this year at the same time it was amassing troops on the border of Ukraine.

The recent events expose the myth of “Arctic exceptionalism” — the idea that the Arctic is impervious to, or at least isolated from, the conflicts plaguing the rest of the world.