Russia’s Assault in Ukraine Slows After an Aggressive Start 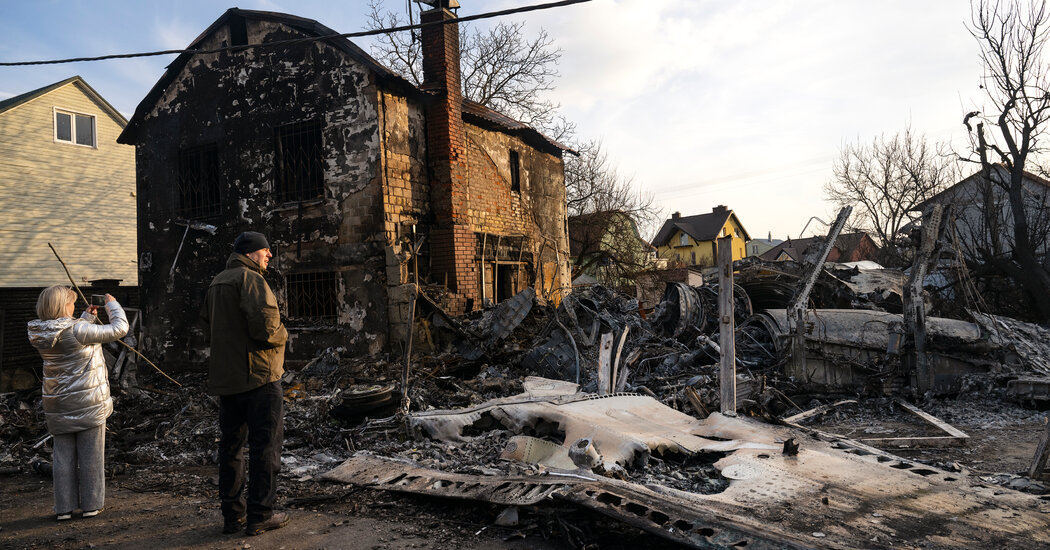 WASHINGTON — For the Russian military, the difficult part came quickly.

On the first day of President Vladimir V. Putin’s invasion of Ukraine, his generals and troops followed a textbook strategy for land invasions. They attacked the country’s military installations and air defense systems with missiles launched from the air, sea and land, seeking to take ownership of the skies, and sped forces to Kyiv, the capital, with the goal of decapitating the government of the democratically elected president, Volodymyr Zelensky.

But then, things slowed. It is one thing to cross the border of another country with tanks and artillery, protected by warplanes above, Pentagon officials and analysts say. It is another thing entirely to lay siege to cities and an army populated by people willing to put their lives on the line to protect what they view as their sovereign right to self-determination.

Within a day of entering Ukraine, Russian forces lost some momentum, senior American and British officials said, as Ukrainian fighters mounted a resistance. No population centers had been taken, a senior Defense Department official told reporters at the Pentagon on Friday. Nor had Russia yet managed to achieve air superiority over Ukraine, partly because the Ukrainians are using mobile systems and partly because Russian missiles have hit old air defense sites, which could show a flaw in Russia’s intelligence. The Ukrainian air defense and missile defense systems were degraded, he said, but the country’s air force was still flying planes and denying air access to Russia.

In addition, officials said, Russia was conducting most of its initial operations during the day, suggesting that its ability to fight at night — a hallmark of the American military — was less effective.

That said, Pentagon officials warned that Russia had sent in only one-third of the 150,000 to 190,000 troops it had massed at Ukraine’s borders, so Moscow could intensify pressure at any time. Military officials said Russia was still in the initial phases of an operation that could take two to three weeks to seize most of the country.

Officials said Russia had begun an amphibious assault from the Sea of Azov, near Mariupol, in the south. Thousands of Russian naval infantry are coming ashore there, with military officials assessing that the plan is to move toward the city. The Russian military, with its decisive edge in cyberwarfare, tanks, heavy weaponry, missiles, fighter planes, warships and sheer numbers, dwarfs that of Ukraine.

But wars are not fought on paper alone. While Russia has established attack lines into three cities — Kyiv in the north, Kharkiv in the northeast and Kherson in the south — Ukrainian troops are fighting to hold all three. Significantly, the senior U.S. defense official said, Ukrainian command and control remains intact.

“It’s not apparent to us that Russian forces over the past 24 hours have been able to execute their plans as they deemed they would,” John F. Kirby, the Pentagon’s chief spokesman, said later Friday. “But it’s a dynamic situation.”

As some Russian troops entered a northern district of Kyiv, missile strikes hammered the city and rockets crashed into residential buildings. If Russian intelligence has figured out where Mr. Zelensky and the rest of the Ukrainian leadership are hiding, the Russian military will probably try to take them out with rockets and airstrikes, a senior Biden administration official said in an interview. But if that does not work, Russian forces might resort to urban combat, a more difficult endeavor.

“The easy part is attacking with missiles and hitting airfields,” said retired Col. David Lapan, a 30-year veteran of the Marine Corps. “But the narrative that they’ve overrun Ukraine is very premature. We’re just a couple of days into this, and it could go on a long time.”

Senior Pentagon officials echoed that view. Russian troops are surrounding Kyiv with an aim to isolate and possibly lay siege to the capital, the senior Biden official said. He said the Russian forces had a list of Mr. Zelensky’s leadership team, and would seek to kill or capture those officials if targeted airstrikes did not accomplish Mr. Putin’s aim of eliminating the government. But Ukrainian troops and citizens are fighting back, he said, which means that Russia, for all of its military might, may not have an easy time reaching its objectives. It would get bloody, he said.

It already has. In an exchange captured in an audio recording that has been shared and tweeted around the world, a Russian warship ordered 13 soldiers protecting tiny Snake Island in the country’s south to “surrender” or “be bombed.” A Ukrainian border guard defiantly responded: “Russian warship,” then used an expletive to reject the demand.

The warship opened fire and killed all 13 border guards. That small battlefield victory for Russia, one Pentagon official said, could inspire Ukrainians and cost Mr. Putin in the public eye at home.

“The Ukrainians are badly overmatched in technology and sheer combat power, especially in the air and at sea, but are fighting on their homeland to protect their children and families,” said retired Adm. James G. Stavridis, the former supreme allied commander for Europe. “Motivation is far higher on their side, and the intangibles can help.”

The Russian military attack continued on Friday as it started the day before: with the terrifying thud of artillery strikes on airports and military installations all over Ukraine.

The Pentagon said that the Russians, using missiles and long-range artillery, were facing particularly strong resistance near Kyiv and Kharkiv.

But Russian troops were also ratcheting up their cyberattacks on media sites and other communications, as well as against a major dam that supplies power across southern Ukraine, the senior Pentagon official said. He added, however, that Mr. Zelensky and his top civilian aides were still in communication with Ukrainian commanders.

Why Russia has not launched even larger cyberattacks across the country, and shut down virtually all communications, to cut off military units from their commanders in Kyiv and from each other remained a bit of a mystery on Friday.

By Thursday night, Russian special forces and airborne troops had pushed into the outskirts of Kyiv. And on Friday, Russian airborne forces had blocked Kyiv from the west, the Defense Ministry claimed, after capturing an airfield in the area in an assault that used “more than 200 Russian helicopters.” If accurate, that could create an air bridge that allows Russia to fly in hundreds of troops to help encircle the capital.

Ukrainian forces, which officials said had shot down several Russian jets and a helicopter in the earlier hours of the conflict on Thursday, were battling all along a broad front line to maintain control over their country.

By midday Friday, Russian forces had fired more than 200 missiles, mostly short-range ballistic rockets but also cruise missiles and rockets fired from the Black Sea, at targets across Ukraine, according to the senior Pentagon official, who spoke on the condition of anonymity to discuss sensitive military assessments.

The targets were primarily military: barracks, ammunition depots and air fields, the official said, in an expected move to destroy as much of the outgunned Ukrainian military as possible, as well as to help weaken any guerrilla movement that could rise up from the ashes of a defeated Ukrainian army.

Russia insisted it was not bombing civilian targets and was trying to limit casualties in the Ukrainian military. “No strikes against civilian infrastructure are being carried out,” Foreign Minister Sergey V. Lavrov said Friday.

But the senior Pentagon official challenged that claim, saying some civilian residential areas had been struck, though the official could not say if they had been deliberately targeted.

How the battle for Kyiv ends will likely signal Mr. Putin’s larger plans for Ukraine.

“Putin’s M.O. is to install new government and have them do the dirty work,” said Representative Michael Waltz, a Florida Republican and former Army Green Beret who traveled to Ukraine in December. “It’s unclear if he is underestimating the level of Ukrainian nationalism that’s developed since 2014.”

Mr. Waltz said he met with Ukraine’s top commando on that December trip. “He was very focused on developing a resistance organization,” Mr. Waltz said, “but I’m not sure he had enough time.”