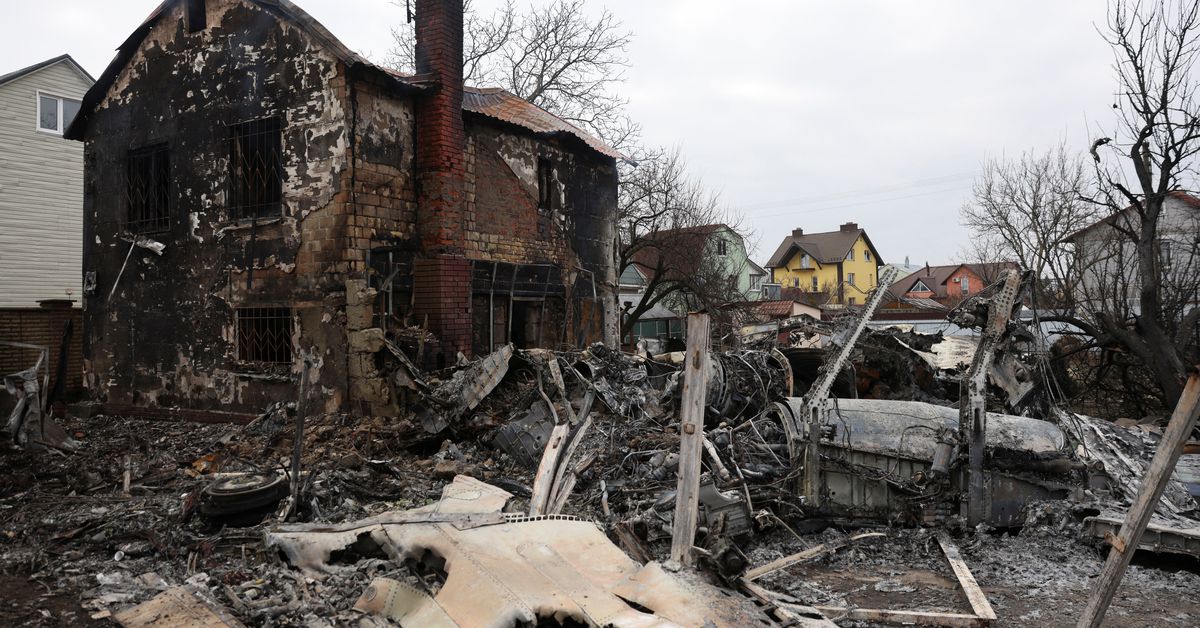 KYIV, Feb 25 (Reuters) – Russian missiles pounded Kyiv on Friday, families cowered in shelters and authorities told residents to prepare Molotov cocktails to defend Ukraine’s capital as fighting was reported in the outskirts of the city.

Moscow said it had captured the Hostomel airfield northwest of the capital – a vital staging post for an assault on Kyiv that has been fought over since Russian paratroopers landed there in the first hours of the war. This could not be confirmed and the Ukrainian authorities reported heavy fighting there.

“Shots and explosions are ringing out in some neighbourhoods. Saboteurs have already entered Kyiv,” said the city’s mayor, former world heavyweight boxing champion Vitali Klitchko. “The enemy wants to put the capital on its knees and destroy us.”

A day after Russian President Vladimir Putin launched a three-pronged invasion of Ukraine from the north, east and south, air raid sirens again wailed over the city of 3 million people. Some residents sheltered in underground metro stations.

President Volodymyr Zelenskiy tweeted that there had been heavy fighting with people killed at the entrance to the eastern cities of Chernihiv and Melitopol, as well as at Hostomel.

Windows were blasted out of a 10-storey apartment block near Kyiv’s main airport. A two-metre crater showed where a shell had struck before dawn.

“How can we be living through this in our time? Putin should burn in hell along with his whole family,” said Oxana Gulenko, sweeping broken glass from her room.

Hundreds of people were crowded into a cramped bomb shelter beneath a building after a televised warning of air strikes.

“How can you wage a war against peaceful people?” said Viktoria, 35, as her children aged 5 and 7 slept in their winter coats.

Alla, 40 said: “The kids were scared, they were crying and asking ‘Mom, will we all die?'”

Britain’s defence ministry said in an intelligence update that Russian armoured forces had opened up a new route of advance towards the capital after failing to capture Chernihiv, and most troops remained more than 50km (31 miles) from Kyiv city centre.

U.S. officials believe Russia’s initial aim is to “decapitate” Zelenskiy’s government. Zelenskiy said he knew he was “the number one target” but would stay in Kyiv.

An adviser to Zelenskiy said Ukraine was prepared for talks with Russia, including on staying neutral, one of Moscow’s pre-war demands. The Kremlin said it had offered talks in the Belarusian capital Minsk, but that Ukraine had proposed Warsaw instead and there was now a “pause” in contacts.

Putin says Ukraine is an illegitimate state carved out of Russia, a view Ukrainians see as aimed at erasing their more than thousand-year history.

The wreckage of an unidentified aircraft that crashed into a house in a residential area is seen, after Russia launched a massive military operation against Ukraine, in Kyiv, Ukraine February 25, 2022. REUTERS/Umit Bektas

Putin says he does not plan a military occupation, only to disarm Ukraine and remove its leaders. But it is not clear how a pro-Russian leader could be installed unless troops control much of the country.

After Moscow denied for months it was planning an invasion, news that Putin had ordered one shocked Russians accustomed to viewing their ruler of 22 years as a cautious strategist. Many Russians have friends and family in Ukraine.

Russian state media have relentlessly characterised Ukraine as a threat, but dozens of anti-war protests were held in Russian cities on Thursday and more than 1,600 people were arrested. read more

One pop star posted a video on Instagram opposing the war, and the head of a Moscow state-run theatre quit, saying she would not take her salary from a murderer.

Ukrainians were circulating an unverified recording on Friday of a Russian warship ordering a Ukrainian Black Sea outpost to surrender. The Ukrainians reply: “Russian warship, go fuck yourself.” Zelenskiy said the 13 guards were killed by a Russian strike and would receive posthumous honours.

Thousands of people crowded Kyiv’s railway station trying to force their way onto packed evacuation trains to Lviv. When a train arrived people rushed the doors, some screamed and guards fired blank shots to scare the crowd away.

Maria, 30, had been there since the morning with her child, husband and dog, trying and failing to board the trains.

“It’s dangerous to break through the crowd with a kid. The dog is scared. Honestly, we’re exhausted,” she said.

When a squad of soldiers marched through the station, people clapped hands and shouted the national military cry of “Glory to Ukraine!”. The soldiers shouted back the traditional response: “Glory to the heroes!”

U.N. agencies said as many as 5 million people could try to flee abroad. Kyiv has banned fighting-aged men from leaving the country, and at borders with Poland, Romania, Hungary and Slovakia, those crossing were mostly women and children.

Reuters journalists saw women crying as they bade goodbye to male loved ones and crossed into Romania.

A democratic nation of 44 million people, Ukraine voted for independence at the fall of the Soviet Union and hopes to join NATO and the EU, aspirations that infuriate Moscow.

Western countries have announced new sanctions on Russia, including blacklisting its banks and banning technology imports.

But they stopped short of forcing Russia out of the SWIFT system for international bank payments, drawing criticism from Kyiv which says the most serious steps should be taken now. Germany and others use SWIFT to pay for Russian gas.

Russia is one of the world’s biggest energy producers, and both it and Ukraine are among the top exporters of grain. War and sanctions will disrupt economies around the world.

Oil and grain prices have soared. Share markets around the world, many of which plunged on Thursday at news of the outbreak of war, were mainly rebounding on Friday.