Russia-Ukraine war: Key things to know about the conflict 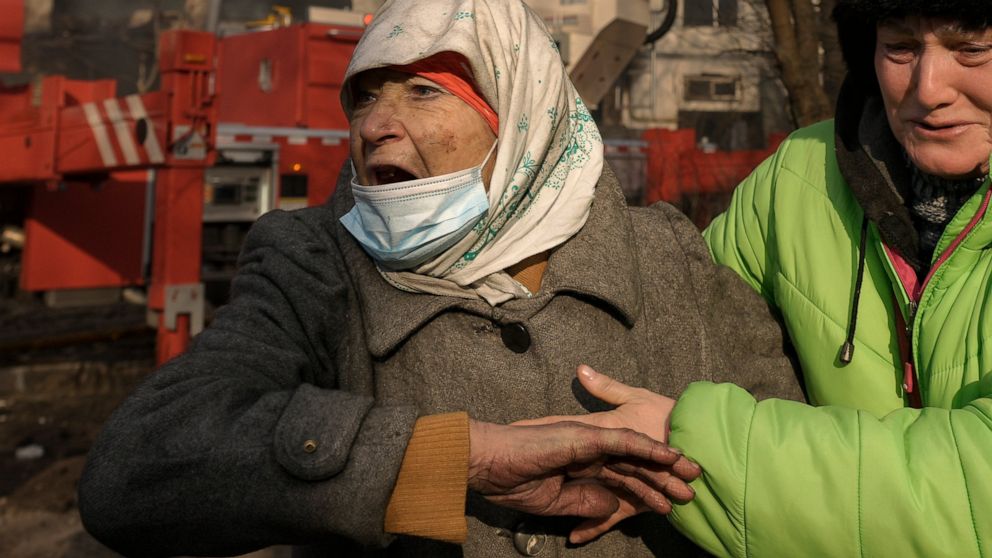 Russian forces are pounding Ukrainian cities and edging closer to the capital, Kyiv, in a relentless bombardment that keeps deepening the humanitarian crisis in this war, now in its third week.

Still, a narrow diplomatic channel remains open, with a Ukrainian official saying Tuesday’s talks with the Russians were difficult, but that there was room for compromise. Russia is also circulating a proposed U.N. Security Council resolution proposing a cease fire to evacuate civilians and to create safe passage for humanitarian aid.

Ukrainian President Volodymyr Zelenskyy is asking for more international help, those close to Russian President Vladimir Putin are facing more sanctions, two more journalists were killed while covering the war, an estimated 20,000 people fled the port city of Mariupol while some people are traveling into Ukraine to help its citizens.

Here are some key things to know about the conflict:

WHAT IS HAPPENING IN AND AROUND KYIV?

Explosions around the city caused significant structural damage, with shockwaves from a blast tearing through the entrance of a downtown subway station that residents have used as a bomb shelter.

The leaders of Poland, the Czech Republic and Slovenia traveled to Kyiv Tuesday by train in a show of support for Ukraine, despite the potential risks of traveling in a war zone. Janez Jansa of Slovenia described the visit as a way to send a message that Ukraine is a European country that deserves to be accepted into the EU one day.

The leader of the Ukrainian Catholic Church in the United States appealed to the world Tuesday for humanitarian aid as well as weapons to help Ukrainians fight against Russia’s invasion. The Most Reve. Borys Gudziak asked what good does it do to feed the citizens of Ukraine “if their brains are going to be blown out, if their apartment buildings are going to be rendered into rubble?”

WHAT IS HAPPENING IN MARIUPOL, OTHER CITIES?

After days of relentless Russian shelling of Mariupol, an estimated 20,000 civilians used a humanitarian corridor to flee the port city. The route runs west for more than 260 kilometers (160 miles) to the Ukraine-held city of Zaporizhzhia.

Mariupol had a population of 430,000 before the war. The strategically located city on the Azov Sea in southeastern Ukraine has been under fire for more than two weeks. Local officials estimate the siege has killed more than 2,300 people and said it had left residents desperate for food, water, heat and medicine.

In the east, Russian forces unleashed scores of new artillery strikes on downtown Kharkiv, hitting the city’s historical center, including its main marketplace. Rescuers were pulling the bodies of dead civilians from destroyed apartment buildings.

Two journalists working for Fox News were killed and one was injured when the vehicle they were traveling in was hit by gunfire on Monday near Kyiv, the network said Tuesday.

The London-based Zakrzewski had covered conflicts in Iraq, Afghanistan and Syria and played a key role last year in getting Fox’s freelancers and their families out of Afghanistan after the U.S. withdrawal, the network said.

The attack happened a day after documentary filmmaker Brent Renaud was killed when Russian forces opened fire on his vehicle.

WHAT HAS THE AP DIRECTLY WITNESSED OR CONFIRMED?

Flames gutted an apartment building in the Svyatoshynskyi district of western Kyiv as emergency workers climbed ladders to rescue people.

Thick, dark smoke choked the air. A firefighter at the scene confirmed one person had died and that several have been rescued alive — but more remained trapped inside. A young woman sobbed outside the charred building, where shocked residents assessed the damage.

“People are dying, and the worst thing is that children are dying,” said Andriy, a firefighter at the scene who would only give his first name, before heading back into the burning building.

Meanwhile, a small but growing number of people are heading back to Ukraine to help, from foreign volunteers to Ukrainian expatriate men and more recently women.

“I will go back and help. I am a health worker, so the hospitals need help,” said Iryna Orel, 50, lugging her luggage as she boarded a train from Przemysl, Poland, to Lviv in western Ukraine. “And I will stay until the end.”

WHAT IS THE STATUS OF DIPLOMACY IN THE RUSSIA-UKRAINE WAR?

Russia has circulated a proposed U.N. Security Council resolution demanding protection for civilians “in vulnerable situations” in Ukraine along with safe passage for humanitarian aid and people seeking to leave the country, without mentioning Russia’s responsibility for the war. The draft could be put to a vote Wednesday, according to a Russian diplomat who was not authorized to speak publicly about the private discussions.

In an emotional speech in which Russian President Volodymir Zelenskyy said nearly 100 children had been killed in the war, he asked the Canadian Parliament and Prime Minister Justin Trudeau to help create a no-fly zone over Ukraine.

Zelenskyy is scheduled to address the U.S. Congress via video on Wednesday in an effort to seek additional help for his country.

WHAT ABOUT SANCTIONS AGAINST RUSSIA?

The U.S. added more sanctions Tuesday, whose targets include senior Russian military officials. The U.S. also placed additional sanctions on the leader of Belarus — Alexander Lukashenko — for allowing Russia to use his country as a staging ground for attacks on Ukraine.

The European Union also added new sanctions to deny oligarchs luxuries such as pure-bred horses and truffles, and sanctioned 15 individuals, including the chief executive of Russia’s state-run television station Channel One, which the EU says is used to spread propaganda.

HOW IS THE SPORTS WORLD BEING AFFECTED BY RUSSIA’S WAR IN UKRAINE?

The Court of Arbitration for Sport upheld a ban on Russian soccer teams from participating in European competition. Russia is also asking CAS to review a similar ban by FIFA, which awarded Poland a bye in its scheduled March 24 World Cup qualifying match against Russia.

The Swiss swimming federation is threatening to boycott this year’s world championships in Budapest, Hungary in June and July if the sport’s governing body allows Russian and Belarusian athletes to compete. FINA has said it opposes a ban and would allow them to compete without their national flags.

Wimbledon organizers and the British government are discussing whether Russian tennis players should be allowed to compete at this year’s tournament if they don’t distance themselves from President Vladimir Putin.

Follow the AP’s coverage of the war between Russia and Ukraine: http://apnews.com/hub/russia-ukraine