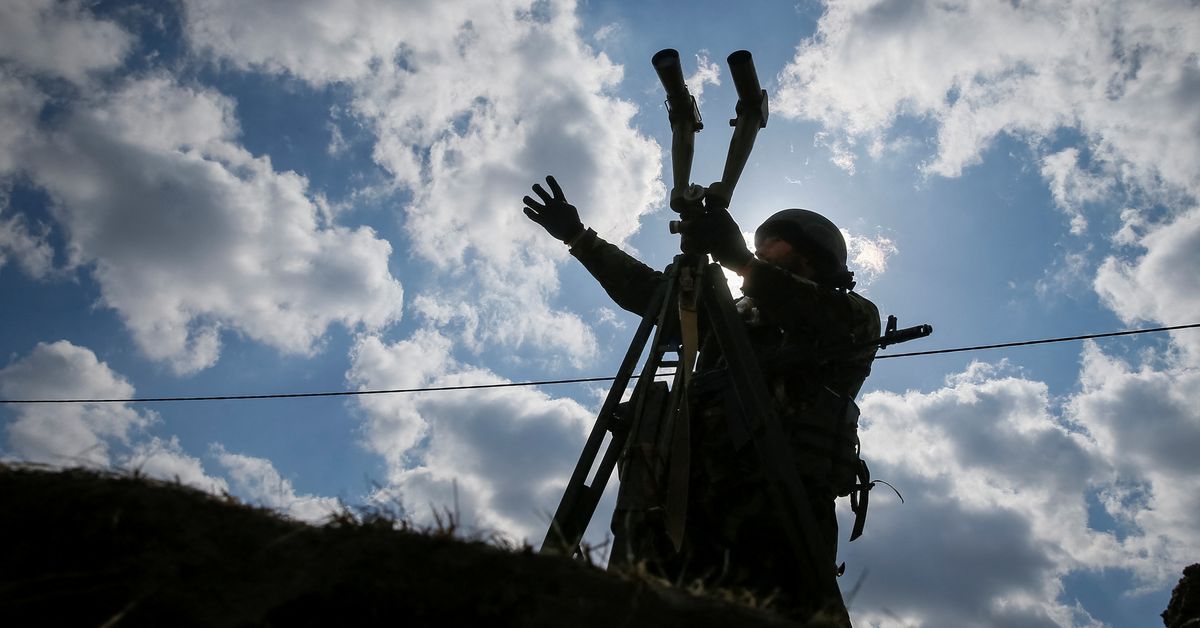 BUCHA/LVIV, Ukraine, March 25 (Reuters) – Moscow signalled on Friday it was scaling back its ambitions in Ukraine to focus on territory claimed by Russian-backed separatists as Ukrainian forces went on the offensive, recapturing towns on the outskirts of the capital Kyiv.

In the month since they launched their invasion of Ukraine, Russian troops have failed to capture any major city. Their assault has met stiff resistance from President Volodymyr Zelenskiy’s forces and been halted at the gates of Kyiv.

The Russians instead have been bombarding and encircling cities, laying waste to residential areas and driving around a quarter of Ukraine’s 44 million people from their homes.

More than 3.7 million of them have fled abroad, half to Poland, which U.S. President Joe Biden was visiting on Friday.

Battlelines near Kyiv have been frozen for weeks with two main Russian armoured columns stuck northwest and east of the capital. A British intelligence report described a Ukrainian counter-offensive that had pushed Russians back in the east.

“Ukrainian counter-attacks, and Russian forces falling back on overextended supply lines, has allowed Ukraine to reoccupy towns and defensive positions up to 35 km east of Kyiv,” the report said. Britain has provided Ukraine with weapons and military training.

In an announcement that appeared to indicate more limited goals, the Russian Defence Ministry said a first phase of its operation was complete and it would now focus on two eastern regions claimed by Russian-backed separatists. read more

“The main objectives of the first stage of the operation have generally been accomplished,” said Sergei Rudskoi, head of the Russian General Staff’s Main Operational Directorate.

“The combat potential of the Armed Forces of Ukraine has been considerably reduced, which … makes it possible to focus our core efforts on achieving the main goal, the liberation of Donbass.”

Volodymyr Borysenko, mayor of Boryspol, an eastern suburb where Kyiv’s main airport is located, said 20,000 civilians had evacuated the area, answering a call to clear out so Ukrainian troops could counter-attack. Ukrainian forces recaptured a nearby village the previous day and would have pushed on but halted to avoid putting civilians in danger, he said.

On the other main front outside Kyiv, to the capital’s northwest, Ukrainian forces have been trying to encircle Russian troops in the suburbs of Irpin, Bucha and Hostomel, reduced to ruins by heavy fighting over the past few weeks.

In Bucha, 25 km (15 miles) northwest of Kyiv, a small group of Ukrainian troops armed with anti-tank missiles was digging foxholes. Andriy told Reuters he had enlisted to defend the town as soon as the invasion began.

“I told my wife to grab the children and to hide in the basement, and I went to the drafting station and joined my unit straight away,” he said. “My wife and children were under occupation for two weeks, but then they managed to escape through a humanitarian corridor.”

A Ukrainian service member uses binoculars at a position on the front line in the north Kyiv region, Ukraine March 24, 2022. REUTERS/Gleb Garanich

Moscow calls its actions in Ukraine a “special military operation” to demilitarise and “denazify” Ukraine. Ukraine and the West say Putin launched an unprovoked war of aggression.

Unable to capture cities, Russia has resorted to pounding them with artillery and air strikes.

Worst hit has been the eastern port of Mariupol, a city of 400,000 under siege since the war’s early days. It is the biggest Ukrainian-held city in the territory Russia demands be ceded to the separatists.

Tens of thousands of people are still believed trapped inside with scant access to food, power or heat, while the city around them has been reduced to ruins.

Waiting in line for food in a district captured by the Russians, Alexandra told Reuters her diabetic husband had slipped into a coma and died.

He was buried in a flowerbed. read more

“We are planning on leaving but it’s very difficult at the moment,” she said. “I can’t leave my husband in a flowerbed.”

Mariupol’s city council for the first time gave an estimated death toll for the bombing of the main theatre on March 16, saying witnesses now said 300 people had been killed among many hundreds sheltering in the basement. Russia denies blame.

The United Nations said it was looking into reports of mass graves inside Mariupol, including one with at least 200 corpses.

The cities of Chernihiv, Kharkiv and Sumy in the east have also endured devastating bombardments. Chernihiv was effectively surrounded by Russian forces, its governor said.

In Kharkiv, officials said six people had been killed by the shelling of an aid distribution site at a supermarket. Video posted on the internet showed a blast striking a car park where scores of people were queuing. People fled in terror after the explosion. Reuters was able to confirm it was filmed outside a supermarket in Kharkiv.

Western sanctions have isolated Russia from global trade to a degree never before visited on such a large economy. China is the biggest power not to have condemned the Russian invasion.

The Reuters report that Sinopec had suspended discussions about investments potentially worth $500 million was the first concrete sign that sanctions are interfering with trade between Moscow and Beijing.

Beijing has repeatedly voiced opposition to the sanctions, insisting it will maintain trade links. But behind the scenes, the government is pressing Chinese companies to tread carefully.

“Companies will rigidly follow Beijing’s foreign policy in this crisis,” said an executive at a Chinese state oil company. “There’s no room whatsoever for companies to take any initiatives in terms of new investment.”

Reporting by a Reuters journalist in Mariupol, Natalia Zinets in Lviv and Reuters bureaus worldwide
Writing by Peter Graff, Editing by Angus MacSwan