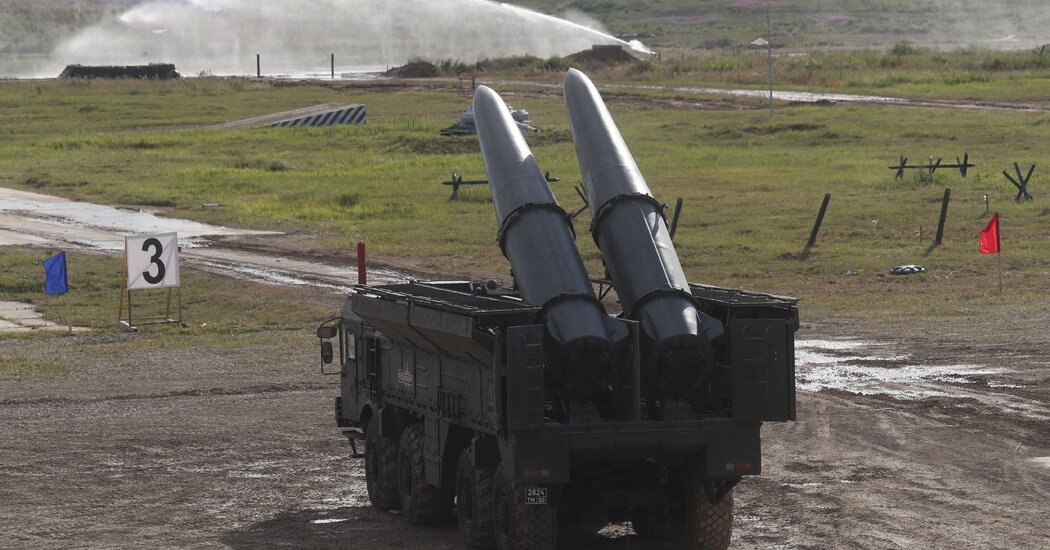 American intelligence officials have discovered that the barrage of ballistic missiles Russia has fired into Ukraine contain a surprise: decoys that trick air-defense radars and fool heat-seeking missiles.

The devices are each about a foot long, shaped like a dart and white with an orange tail, according to an American intelligence official. They are released by the Iskander-M short-range ballistic missiles that Russia is firing from mobile launchers across the border, the official said, when the missile senses that it has been targeted by air defense systems.

Each is packed with electronics and produces radio signals to jam or spoof enemy radars attempting to locate the Iskander-M, and contains a heat source to attract incoming missiles. The official, who was not authorized to speak publicly about intelligence matters, described the devices on the condition of anonymity.

The use of the decoys may help explain why Ukrainian air-defense weapons have had difficulty intercepting Russia’s Iskander missiles.

Powered by a solid-fuel rocket motor, the Iskander can reach targets more than 200 miles away, according to U.S. government documents. Each mobile launcher can fire two Iskanders before it must be reloaded.

Photographs of the dart-shaped munitions began circulating on social media two weeks ago. They had stumped experts and open-source intelligence analysts — many of whom mistook them for bomblets from cluster weapons based on their size and shape.

Richard Stevens, who spent 22 years in the British Army as an explosive ordnance disposal soldier, and later worked as a civilian bomb technician for 10 years in southern Iraq, Africa and other regions, said he had been exposed “to plenty of Chinese and Russian munitions, but I had never seen this.”

Mr. Stevens posted photos of the munitions to a site for military and civilian bomb disposal experts that he started in 2011, and found that no one else seemed to have seen these mystery munitions before either.

“That Russia is using that size of weapon — the Iskander-M — and quite a few of them I believe, that’s why we’re seeing this now,” Mr. Stevens added. “It’s just that, post-conflict in the past 10 to 15 years, no one has had the opportunity to see this.”

The devices are similar to Cold War decoys called “penetration aids,” the intelligence official said, that have accompanied nuclear warheads since the 1970s and were designed to evade antimissile systems and allow individual warheads to reach their targets. The incorporation of the devices into weapons like the Iskander-M that have conventional warheads has not been previously documented in military arsenals.

The use of the decoys may point to some level of carelessness or urgency by Russian military leadership, Mr. Lewis said, given that Russia knows they will inevitably be collected and studied by Western intelligence services so that NATO air defenses can be programmed to defeat the Iskander’s countermeasures.

A show of E.U. support. The leaders of Poland, the Czech Republic and Slovenia headed to Kyiv to express the European Union’s “unequivocal support” and offer financial help to Ukraine. The visit was kept secret until the last minute as fighting rages around the Ukrainian capital.

And it is highly unlikely, he said, that the version of the Iskander that Russia has sold to other countries would contain these decoys.

“That suggests to me that the Russians place some value on keeping that technology close to home and that this war is important enough to them to give that up,” Mr. Lewis said. “They’re digging deep, and maybe they no longer care, but I would care if I were them.”

“I think that there are some very excited people in the U.S. intelligence community right now,” he added.