RNC Watch Guide: What to Watch For at the Convention Tonight 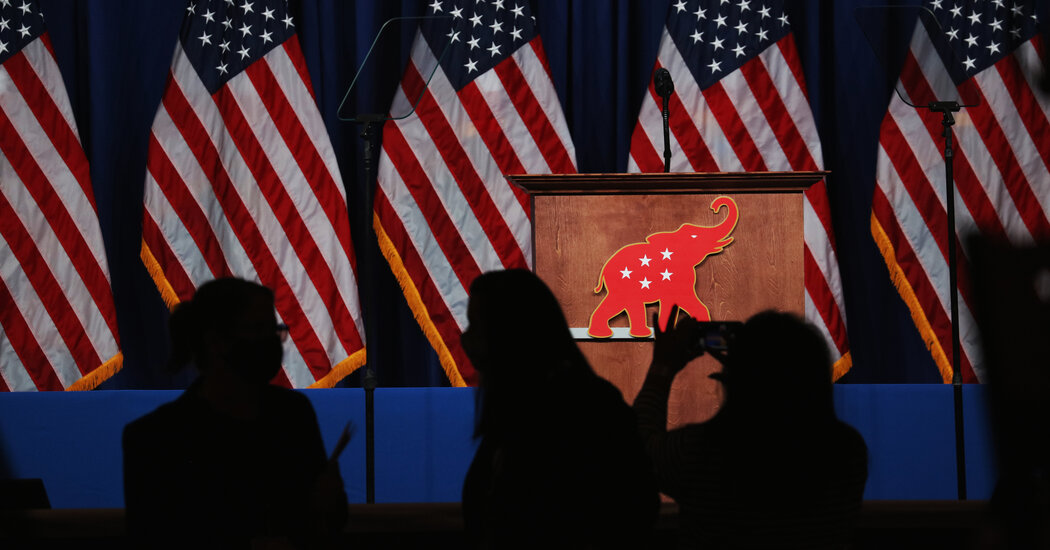 [Our guide to tonight’s RNC schedule and speakers, including where and how to watch.]

CHARLOTTE, N.C. — It took three tries for President Trump and the Republican Party to finally find a convention location that could work in the middle of a pandemic — first Charlotte, N.C., then Jacksonville, Fla., and, finally, the White House — but their week in the spotlight is finally here.

Unlike the all-virtual production the Democrats staged last week, Mr. Trump’s focus will be on live events in front of an audience that isn’t just waving at him from a Zoom screen. The program is heavy on all things Trump, with an appearance by the president every night in prime-time, and a lineup featuring Melania Trump and all of the president’s adult children.

As the leader of the party in power, Mr. Trump has the advantage of going second, which could help stop any momentum former Vice President Joseph R. Biden Jr. gained from the Democrats’ convention, and give the president an opportunity to deliver a pointed response to their criticisms, particularly when it comes to his handling of the coronavirus pandemic.

The one problem with making himself, as one aide put it, the “talent in chief” all week is that the more voters see of him has, in the past, led to a drop in the polls. Here’s what to watch for as the Republican convention kicks off.

Monday night’s lineup features a hodgepodge of speakers, from Senator Tim Scott of South Carolina, the lone Black Republican in the Senate, to Mark and Patricia McCloskey, the St. Louis couple who gained overnight notoriety after waving a pistol and a military-style rifle at Black Lives Matters protesters who were marching peacefully on their street.

The program appears to represent a seesaw between more conventional Republican voices, like Nikki Haley, the former ambassador to the United Nations, who is expected to run for president herself in 2024, and those who take the stage solely to energize the Trump base and speak as avatars of white grievance, like the McCloskeys.

Donald Trump Jr., the president’s eldest son, who for months has been leveling false, personal attacks against Mr. Biden, is on the program for Monday night (at one point this spring, he suggested Mr. Biden was a pedophile, an incendiary and baseless charge). Other speakers on Monday night include Kimberly Guilfoyle, a top fund-raising official for the campaign and Donald Trump Jr.’s girlfriend, as well as Representatives Matt Gaetz of Florida, Jim Jordan of Ohio and Steve Scalise of Louisiana.

The Monday night program also shows the lengths to which the campaign has gone to feature Black voices. Kim Klacik, a Black Republican running for Congress in a Maryland district she has little chance of winning, has a speaking slot. Ms. Klacik is barely known apart from one viral ad in which she told Baltimore voters, “Black people don’t have to vote Democrat.”

For those watching at home, the TV broadcast schedule for this week’s Republican convention will be nearly identical to the Democrats’ jamboree.

The Big Three networks — ABC, CBS and NBC — plan to pre-empt their usual entertainment programming at 10 p.m. each night for an hour of live coverage. Anchors like Norah O’Donnell of CBS, Savannah Guthrie of NBC and George Stephanopoulos of ABC will guide viewers through the proceedings, including highlights from earlier in the night and real-time pundit analysis.

CNN and MSNBC are expected to carry the entirety of the Republicans’ 2.5-hour program live. Both networks aired the Democrats’ convention relatively unfiltered, with few interruptions from anchors and analysts. PBS and C-SPAN also plan to air this week’s events in full.

Fox News’s live coverage starts at 10 p.m. each night, led by the anchors Bret Baier and Martha MacCallum. Last week, Fox News’s 9 p.m. host, Sean Hannity, occasionally dipped into the Democrats’ convention during his show, for the most part chiming in with his own critical commentary. This week, it will be up to Mr. Hannity’s discretion — and that of his 8 p.m. lead-in, Tucker Carlson — how much of the Republicans’ convention airs during his program.

A convention designed by the programmer in chief

Mr. Trump, an experienced hand at live television — he relished participating in the live season finales during his years on “The Apprentice” — is well aware of what plays, and what doesn’t, on the small screen.

His decision to appear in the 10 p.m. hour each night of the convention is no coincidence. That’s when ABC, CBS and NBC all start their prime-time coverage, kicking in a few extra million viewers to the convention audience. While the cable channels CNN and MSNBC attracted the biggest ratings for the Democrats last week, the 10 p.m. broadcast audience is likely to stretch beyond political die-hards and voters who have already made up their minds.

Trump aides are also promising another reality-TV staple adored by the president: the element of surprise. “There are going to be some breakout stars, some people that you would not expect to be supporters of the president,” Jason Miller, a senior adviser to the Trump campaign, told NBC’s Chuck Todd on “Meet the Press” on Sunday. “We have some big surprises lined up. Make sure you’re tuning in.”

To achieve the spice and suspense of an “Apprentice” episode, Mr. Trump’s team turned to a series veteran: Sadoux Kim, a longtime “Apprentice” producer who worked closely with the show’s creator, Mark Burnett. Mr. Kim, a lead consultant on the convention, has worked on other Trump television properties, including a Miss Universe pageant for which he served as a judge. Also on the convention payroll is Chuck LaBella, a former NBC entertainment executive who helped produce “The Comedy Central Roast of Donald Trump.”

Will there be any appeals beyond Trump’s base?

The president is famously inconsistent, except for one thing — his refusal to try to expand his appeal beyond the core group of supporters who revel in his demagoguing of immigrants and his declarations that journalists are “the enemy of the people.”

As much as Mr. Trump loves the embrace of the supporters he calls “my people,” there aren’t enough of them to win him a second term without adding other voters to the mix. So an open question for the convention is whether the president takes one of his dwindling chances to appeal to a broader audience than the one he already has.

Of course, it’s not entirely clear how Mr. Trump could accomplish such a thing after years of doubling down on what his base voters want, even if he wanted to. Mr. Trump has said in recent weeks that Mr. Biden wants to “hurt God” and “hurt the Bible,” he has called Black Lives Matter a “symbol of hate,” and he has repeatedly talked about “suburban housewives” who will be threatened by low-income housing being developed in their neighborhoods. And over the weekend, the Republican National Committee passed a resolution condemning the Southern Poverty Law Center’s definitions of hate groups.

Those statements and actions are far from bridges to bring opposing sides together.

What will Trump say about the coronavirus?

The convention is also one of Mr. Trump’s last opportunities to demonstrate to voters that he understands the severity of the coronavirus, which has now killed more than 176,800 Americans.

For months, Mr. Trump played down the threat of the pandemic, suggesting any focus on it was an effort by the news media and his political opponents to damage him. He resisted urging people to wear masks until well after health experts in his own administration did. He has criticized governors who delayed moves to end social distancing measures, affecting millions of people’s jobs but preventing broader spread of the virus. And he has cast his administration’s failures in responding to the virus as an unmitigated success.

Mr. Trump’s approval ratings on his handling of the virus have been a grim reflection of those moves. The convention presents him with an opportunity to try to show people he understands the gravity of the situation, and isn’t simply selling a story about himself.