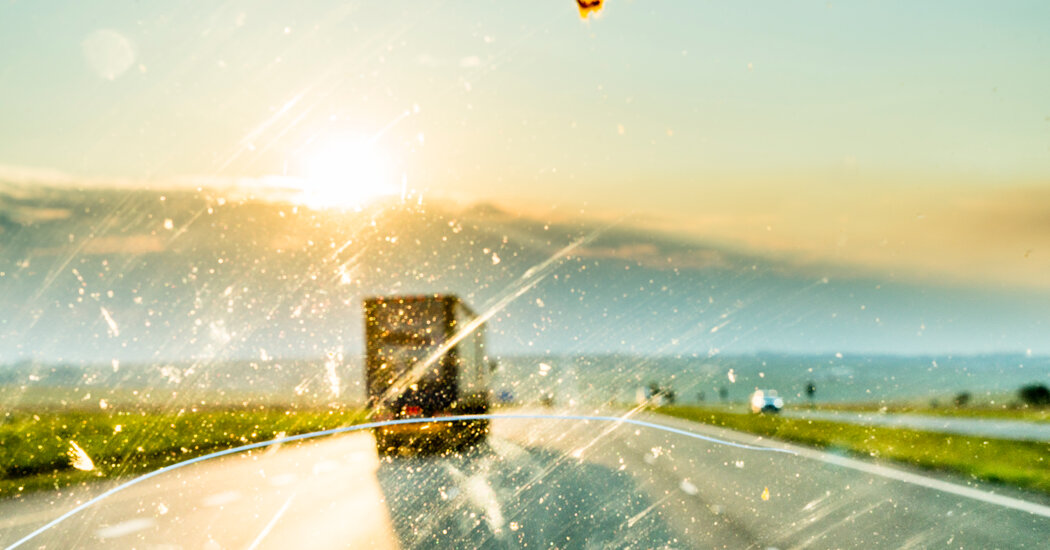 THE INSECT CRISIS: The Fall of the Tiny Empires That Run the World, by Oliver Milman

Anyone with a car has gathered data on insect declines. Entomologists call it “the windshield effect,” a relatable metric neatly summed up by a question: When was the last time you had to clean bug splatter from your windshield? This ritual was once an inevitable coda to any long drive. Now, we’re far more likely to watch those same landscapes pass by through unblemished glass, mile after empty mile.

The trend is more than anecdotal. When the ecologist Anders Pape Møller began systematically driving two Danish roads in 1996 and counting the windshield splats, many people dismissed his project as a lark. Twenty years later, the results showed something deadly serious: Collisions with insects had declined 80 percent along the first roadway, and a staggering 97 percent along the second. Other scientists, using more conventional methods, have reported similar collapses everywhere from Puerto Rican jungles to nature reserves in Germany. News stories have referred to the situation as an “insect apocalypse,” or even “insectageddon.” Beyond the headlines, entomologists are frantically trying to figure out what is happening, and how in the world to stop it.

Those concerns lie at the heart of the environmental journalist Oliver Milman’s gripping, sobering and important new book. He, too, delves beyond the headlines, refreshingly willing to embrace the complexity of the issue. “It’s useful,” he writes, “to think about the insect crisis less like a single downward sloping line on a graph and more like a lot of different lines.” While many species are indeed plummeting, some are holding steady, zigzagging or — for pests like bedbugs that thrive alongside people — going up. Even more don’t appear on the graph at all because no one has ever studied them. Of the world’s estimated 5.5 million to 30 million different kinds of insects, a scant one million have been identified. Some will likely vanish before we have done so much as name them.

Blame for the crisis falls on broad biodiversity threats like habitat loss and climate change, as well as insect-specific challenges from light pollution and the rampant use of pesticides. But Milman draws particular attention to the way industrial agriculture has transformed once-varied rural landscapes into vast monocultures. Devoid of hedgerows or even many weeds, modern single-crop farms simply lack the diverse plant life necessary to support an insect community. As the agricultural ecologist Barbara Smith puts it: “It’s like if the only food available was chips. Chips for everybody even if you don’t eat chips.”

Milman has an ear for a good quote and a knack for explaining scientific research. He interviews dozens of experts, from beekeepers battling murder hornets in the Pacific Northwest to a biologist tracking declines in beetles through chemical traces in the feathers of the birds that eat them. There are times one longs to linger on a story, but with so much urgent ground to cover it’s hard to begrudge the book its pace. This omnibus approach also reveals something telling: the startling number of scientists who describe their findings as “alarming” or “frightening.” In other words, the people who know most about the crisis aren’t just worried; they’re scared.

Unchecked insect declines threaten massive crop failures, collapsing food webs, bird extinctions and more. But as the ecologist Roel van Klink observes, “Insect populations are like logs of wood that are pushed underwater.” Remove the pressure and they bob back up again, something Milman glimpses at the Knepp estate in Sussex, where restored, pesticide-free pastures and woodlands hum with so much life they’ve become a tourist attraction. “If you squint a little,” Milman writes, “addressing the insect crisis can be viewed as surprisingly straightforward.” Doing things to help insects may not be necessary if we stop doing things that harm them.

Thor Hanson is an author and biologist whose recent books include “Buzz” and “Hurricane Lizards and Plastic Squid.”