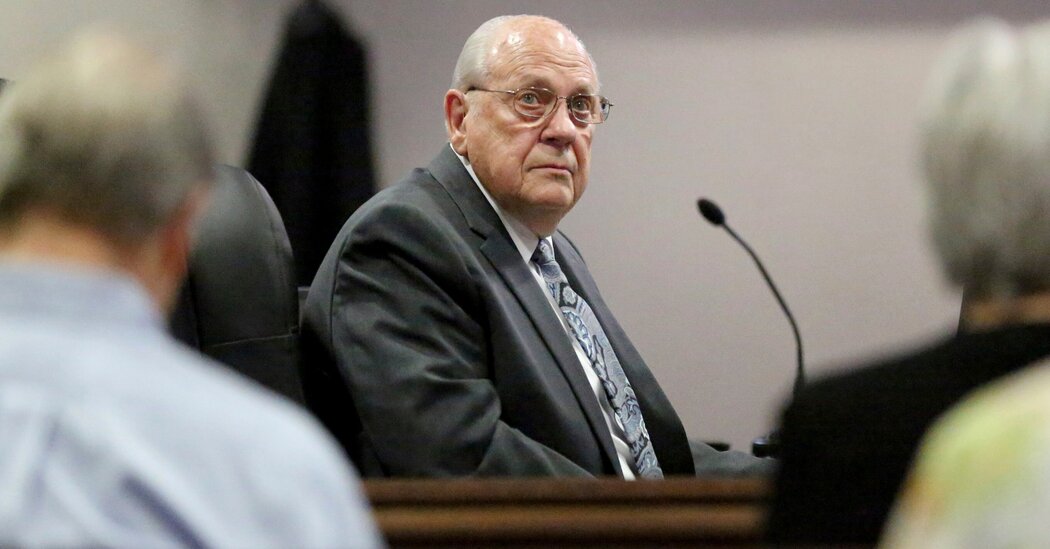 A jury in Florida on Friday acquitted a retired SWAT commander who shot and killed a man more than eight years ago inside a movie theater after a dispute over cellphone use.

A jury of four men and two women found Curtis J. Reeves Jr. not guilty of second-degree murder in the fatal shooting of Chad W. Oulson on Jan. 13, 2014, at a matinee showing of “Lone Survivor” in a movie theater near Tampa.

A defense lawyer for Mr. Reeves argued that his client had acted in self-defense when he fired on Mr. Oulson, who had tossed a bag of popcorn at Mr. Reeves, a retired Tampa Police Department SWAT commander.

The verdict ended a case that ignited debates about legal firearms in public spaces and lingered in court because of multiple appeals and pandemic-related delays.

The case had garnered even more attention because of its ties to Florida’s Stand Your Ground law, which allows a person to use deadly force without first trying to retreat from a dangerous situation if the person “reasonably believes” that his or her life is being imminently threatened.

In 2017, Florida state lawmakers strengthened the law and shifted the burden of proof to prosecutors. A judge ultimately denied Mr. Reeves a self-defense claim under the law but he was still able to claim self-defense at the trial.

His lawyer, Richard Escobar, said in his closing argument that Mr. Reeves, who was 71 at the time, was an older man fearful of being attacked by the stronger Mr. Oulson, who was 43, and 6 feet 4 inches tall. Mr. Escobar said that when Mr. Reeves fired his handgun, it was purely in self-defense.

“I’ve never been encountered by somebody exhibiting that uncontrolled anger or rage and all of the perceptors that you could imagine, whether it’s verbal, physical, expression,” Mr. Reeves testified at his trial.

He added, “I came to the theater with my family to enjoy a movie, not to be attacked by some guy that’s out of control.”

Mr. Oulson, a Navy veteran and finance manager at a local motorcycle dealership, was on a date with his wife. Their 22-month-old daughter, Alexis, who was with a babysitter at home, was not feeling well.

Prosecutors said the worry about his daughter prompted Mr. Oulson to defy moviegoing etiquette and text the babysitter to see how his daughter was doing. The movie had not started yet while Mr. Oulson texted, they said.

Charles Cummings, who was 68 at the time and had served in the Marines, was in the row ahead of Mr. Reeves during the shooting. He told The New York Times in 2014 that Mr. Reeves was “aggressive” and had been kicking the seat in front of him because “he was agitated” that Mr. Oulson was using his phone in the semidark theater.

Mr. Reeves got up and told Mr. Oulson to quit texting. Mr. Oulson ignored him and continued. Mr. Reeves then left to get a manager, but returned alone.

Mr. Oulson complained about being tattled on, and the two men exchanged more words. Then Mr. Oulson threw a bag of popcorn at Mr. Reeves, who then shot Mr. Oulson in the chest, according to a criminal complaint.

Mr. Oulson’s wife, Nicole, had placed her hand on her husband’s chest and was struck in a finger.

Ms. Oulson testified that Mr. Reeves was rude and never said, “Do you mind?” or “Excuse me,” The Tampa Bay Times reported.

In an audio recording of a police interview, Mr. Reeves said Mr. Oulson “kept on hollering.”

“Whatever he was saying was threatening, it was enough for me to look for a way out,” Mr. Reeves told detectives. “My wife said we should’ve just moved.”

Scott Rosenwasser, the state prosecutor in the case, said in his closing arguments that Mr. Reeves had displayed an “explosive moment of anger.” He said there “wasn’t any imminent threat of death” to Mr. Reeves — just some popcorn in his face.

“A man was killed because popcorn was tossed,” Mr. Rosenwasser said.

Mr. Escobar, however, disagreed, telling jurors that they needed “to judge the reasonableness of that perception, not here in the comfort of a courtroom, but in a darkened, cramped theater.”

Video footage from inside the theater showed Mr. Reeves instantly drawing his weapon after Mr. Oulson tossed the popcorn.

TJ Grimaldi, a lawyer representing Ms. Oulson, said on Saturday that he was “disgusted and embarrassed for the State of Florida and our legal system.”

He added that his client was “in total disbelief and total shock and just can’t comprehend how this jury was able to find the conclusion that they did.”

As jurors announced their verdict, Ms. Oulson was in the courtroom, visibly shaking and crying as juror after juror confirmed that they were in agreement: Mr. Reeves was not guilty.

Mr. Reeves, who appeared stoic as the verdict was read, looked toward the floor. As he left the courtroom, he grabbed his cane and hugged family members.