Researchers See ‘Future of an Entire Species’ in Ultrasound Technique 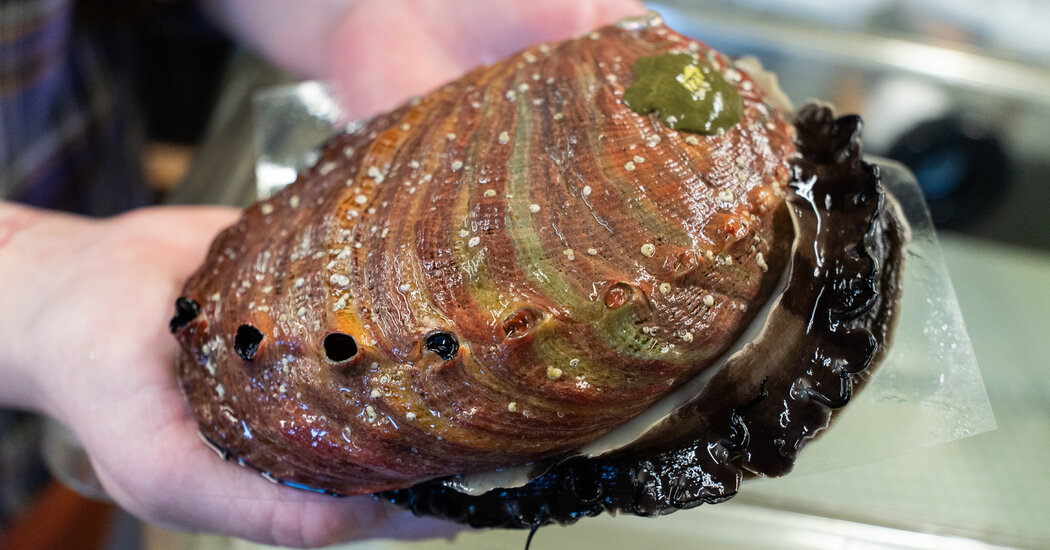 Kristin Aquilino, a scientist at the University of California, Davis, knows that expectations are just disappointments in disguise. Over the last decade, she has led the school’s white abalone captive breeding program, which aims to bring the marine mollusk back from the brink of extinction.

Last June, she and her colleagues drove snails kept in captivity at Davis down the California coast to Cabrillo Marine Aquarium in Los Angeles. Others were dropped off at labs and aquariums around Southern California; all told, this was the largest spawning attempt of white abalone to date. But when she tried to get them in the mood with what she calls a love potion — a mix of seawater with hydrogen peroxide — the snails languished in their tanks occasionally emitting bubbles, but no eggs or sperm. After four hours, Dr. Aquilino called it off. (Simultaneous attempts at the other sites also failed.)

“It sucks,” she said. “There’s a lot of human effort involved, but there’s no way they’ll spawn today.”

After fishermen depleted 99 percent of white abalone from the wild in the 1970s, the sea snails are hanging on by a slimy thread. Despite the urgency of breeding these and other endangered aquatic snails to reintroduce to the wild, propagating more of them in a lab is still a guessing game, Dr. Aquilino says.

Now, a study published Thursday in the journal Frontiers in Marine Science offers an improved tool for determining which abalone will be reproductive. The technique, using noninvasive ultrasound, a decades-old medical technology, could raise the prospects of successful captive breeding efforts and ultimately help restore endangered abalone in the wild.

“If we can use this method, it could make a really big difference and we might be able to strategically target animals to induce to spawn,” said David Witting, a fisheries biologist at the National Oceanic Atmospheric Administration who specializes in abalone recovery and was not involved in the study. “We’ll take any more edge we can get. Getting animals to spawn is really the pinch point for the whole process of recovering them.”

For Dr. Aquilino, the method offers a glimmer of hope.

Seven species of abalone — sea snails with colorful, domed shells — have historically called the west coast of North America home. The animals help the ecosystems they live in by maintaining kelp forests, feeding marine mammals and improving the health of reefs.

But over much of the 20th century, divers and fishermen depleted several species of abalone. Aside from the white abalone, black abalone succumbed to a disease called withering syndrome, and pinto abalone in the northern Pacific suffered from overharvesting and habitat degradation. In the wild, abalone are terrible at long-distance relationships: In order to reproduce, they must be within proximity of each other because the snails send their gametes into the water column to get fertilized. By the 1990s, there were so few of the endangered species that scientists realized they needed to intervene.

Reproducing them in captivity, however, is a big challenge. There are no clear cues for when they’re ready to reproduce. Researchers have traditionally inspected the snails visually by prying them off whatever surface they’re suctioned to, then looking for the crevice between their sticky feet and shell to find a bulge, where the animal’s gonad is below the milky skin. Depending on how large the gonad is, the scientists give the animal a score: plump protrusions outrank smaller ones.

“That kind of gives you an idea of whether or not the animal may spawn,” said Josh Bouma, the abalone program director of the Restoration Fund in Washington State, who heads the captive breeding program for the endangered pinto abalone.

But visual exams can be vastly inaccurate. The gonad surrounds their stomachs, so if the snail just had a huge meal, the score can be misleading. Researchers could also take a more accurate tissue sample, but it would kill the snail. And handling abalone in any way — including popping them from their aquarium tanks — is enough to stress them out and may kill their mood.

Ultrasound, on the other hand, is noninvasive.

The idea of using ultrasound on these snails first came about in 2019. Jackson Gross, an aquaculture specialist at the University of California, Davis, had used ultrasound on fin fish, such as sturgeon, to study their reproductive habits. He stumbled across a YouTube video of a veterinarian sliding an ultrasound probe along the bottom of a land snail. If it worked for land snails, wouldn’t it work for sea snails like abalone, too?

Sara Boles, a postdoctoral researcher working with Dr. Gross, discovered a way to perform ultrasounds on the abalone without taking them out of their tanks by holding the device up to their sticky feet. This quickly produced clear images of their swollen or flaccid gonads on a laptop appended to the ultrasound probe.

In the new study, Dr. Boles and her colleagues examined over 200 abalone and scored the thickness of their gonads on a scale of 1 to 5 to determine which are likely to spawn. With the ultrasound images, the gonad comes into focus: The stomach appears as a dark, cone-shaped item, and the slightly lighter gonad surrounds it.

For now, these images can provide an easy way to score animals, but Dr. Gross and his colleagues want to verify if gonad thickness also correlates with reproductive success.

Of the eight white abalone that Dr. Boles rated highest after the ultrasound exam, five spawned; some snails with slightly lower ratings did, too. The method is already helping researchers revise their methods of assessing which abalone are most ready to reproduce.

“It’s another way to help ensure that we have the best of the best,” Dr. Boles said.