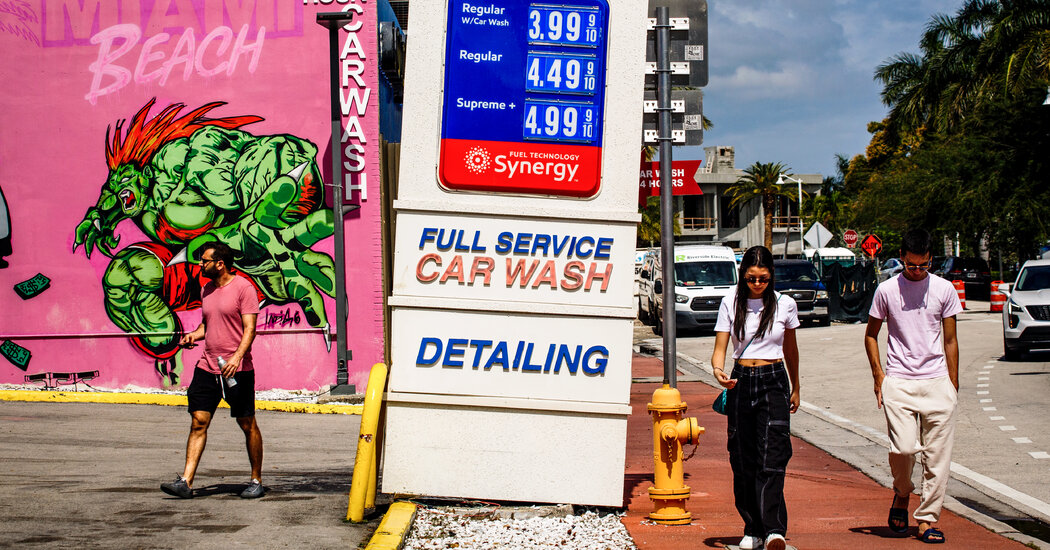 WASHINGTON — As gas prices hit a high this week, top Republican lawmakers took to the airwaves and the floors of Congress with misleading claims that pinned the blame on President Biden and his energy policies.

Mr. Biden warned that his ban on imports of Russian oil, gas and coal, announced on Tuesday as a response to Russia’s invasion of Ukraine, would cause gas prices to rise further. High costs are expected to last as long as the confrontation does.

While Republican lawmakers supported the ban, they asserted that the pain at the pump long preceded the war in Ukraine. Gas price hikes, they said, were the result of Mr. Biden’s cancellation of the Keystone XL pipeline, the temporary halt on new drilling leases on public lands and the surrendering of “energy independence” — all incorrect assertions.

Here’s a fact check of their claims.

“This administration wants to ramp up energy imports from Iran and Venezuela. That is the world’s largest state sponsor of terror and a thuggish South America dictator, respectively. They would rather buy from these people than buy from Texas, Alaska and Pennsylvania.”
— Senator Mitch McConnell, Republican of Kentucky and the minority leader, in a speech on Tuesday

“Democrats want to blame surging prices on Russia. But the truth is, their out-of-touch policies are why we are here in the first place. Remember what happened on Day 1 with one-party rule? The president canceled the Keystone pipeline, and then he stopped new oil and gas leases on federal lands and waters.”
— Representative Kevin McCarthy, Republican of California and the minority leader, in a speech on Tuesday

“In the four years of the Trump-Pence administration, we achieved energy independence for the first time in 70 years. We were a net exporter of energy. But from very early on, with killing the Keystone pipeline, taking federal lands off the list for exploration, sidelining leases for oil and natural gas — once again, before Ukraine ever happened, we saw rising gasoline prices.”
— Former Vice President Mike Pence in an interview on Fox Business on Tuesday

These claims are misleading. The primary reason for rising gas prices over the past year is the coronavirus pandemic and its disruptions to global supply and demand.

“Covid changed the game, not President Biden,” said Patrick De Haan, the head of petroleum analysis for GasBuddy, which tracks gasoline prices. “U.S. oil production fell in the last eight months of President Trump’s tenure. Is that his fault? No.”

“The pandemic brought us to our knees,” Mr. De Haan added.

In the early months of 2020, when the virus took hold, demand for oil dried up and prices plummeted, with the benchmark price for crude oil in the United States falling to negative $37.63 that April. In response, producers in the United States and around the world began decreasing output.

As pandemic restrictions loosened worldwide and economies recovered, demand outpaced supply. That was “mostly attributable” to the decision by OPEC Plus, an alliance of oil-producing countries that controls about half the world’s supply, to limit increases in production, according to the U.S. Energy Information Administration. Domestic production also remains below prepandemic levels, as capital spending declined and investors remained reluctant to provide financing to the oil industry.

Russia’s invasion of Ukraine has only compounded the issues.

“When you throw a war on top of this, this is possibly the worst escalation you can have of this,” said Abhiram Rajendran, the head of oil market research at Energy Intelligence, an energy information company. “You’re literally pouring gasoline on general inflationary pressure.”

These factors are largely out of Mr. Biden’s control, experts agreed, though they said he had not exactly sent positive signals to the oil and gas industry and its investors by vowing to reduce emissions and fossil fuel reliance.

Mr. De Haan said the Biden administration was “clearly less friendly” to the industry, which may have indirectly affected investor attitudes. But overall, he said, that stance has played a “very, very small role pushing gas prices up.”

“There has been a pretty stark miscalculation of the amount of supply we would need to keep energy prices at affordable levels,” he said. “It was taken for granted. There was too much focus on the energy transition.”

“The key relationship to watch is between companies and investors,” he said.

It is true that the Biden administration is in talks with Venezuela and Iran over their oil supplies. But the administration is also urging American companies to ramp up production — to the dismay of climate change activists and contrary to Republican lawmakers’ suggestions that the White House is intent on handcuffing domestic producers.

Speaking before the National Petroleum Council in December, Jennifer M. Granholm, the energy secretary, told oil companies to “please take advantage of the leases that you have, hire workers, get your rig count up.”

The role of crude oil production. Gas prices have gone up in part because of fluctuations in supply and demand. Demand for oil fell early in the pandemic, so oil-producing nations cut production. But over the past year, demand for oil recovered far faster than production was restored, driving prices up.

Additional factors at play. The price of crude oil is only one element driving up gas prices. Compliance with renewable-fuel standards can contribute to the cost, the price of ethanol has increased, and labor shortages in the trucking industry have made it more expensive to deliver gas.

A global energy crunch. Other types of fuels, including natural gas and coal, are also growing more expensive. Natural gas prices have shot up more than 150 percent in recent months, threatening to raise prices of food, chemicals, plastic goods and heat this winter.

The notion that the United States gained “energy independence” under Mr. Trump, and reversed course under Mr. Biden, is also misleading.

Even before Mr. Trump took office, the United States had been projected to become a net energy exporter in the 2020s “because favorable geology and technological developments result in the production of oil and natural gas at lower costs,” according to the Energy Information Administration.

The term “energy independence” can also suggest that the United States did not rely at all on imports. That, too, is untrue. In 2020, the United States still imported 7.9 million barrels of crude oil and other petroleum products a day.

Moreover, the specific policies cited by Republican lawmakers as evidence of Mr. Biden’s supposed “war on American energy” have had little impact on rising gas prices.

The Keystone XL pipeline, which would have expanded an existing system transporting oil from Canada to the Gulf Coast, has been a political and environmental battleground since its conception in 2008. The Obama administration denied the company behind it, TransCanada, a construction permit in 2015. The Trump administration approved the permit in 2017, but the project stalled in the face of litigation. By the time Mr. Biden rescinded its permit on his first day in office, just 8 percent of it had been built.

Even if Mr. Biden had greenlighted the project and TransCanada, now known as TC Energy, had won its court battles, it is unlikely that the pipeline would have been operational today given that the company estimated in March 2020 that it would have entered into service in 2023. And “even if it were completed overnight, there’s no capacity for oil to be put into this pipeline,” Mr. De Haan said, pointing to supply chain issues and labor shortages that continue to affect American and Canadian oil and gas producers.

Absent the Keystone XL pipeline, crude oil imports from Canada have nonetheless increased by 70 percent since 2008, transported by other pipelines and rail. The Trump administration itself told PolitiFact in 2017 that the pipeline’s impact on prices at the pump “would be minimal.”

The claims about oil and gas leases are even more incorrect.

Though Mr. Biden temporarily halted new drilling leases on federal lands in January 2021, a federal judge blocked that move last June. In its first year, the Biden administration actually approved 34 percent more of these permits than the Trump administration did in its first year, according to federal data compiled by the Center for Biological Diversity, an environmental group.