Republicans Still Don’t Get It – Slate 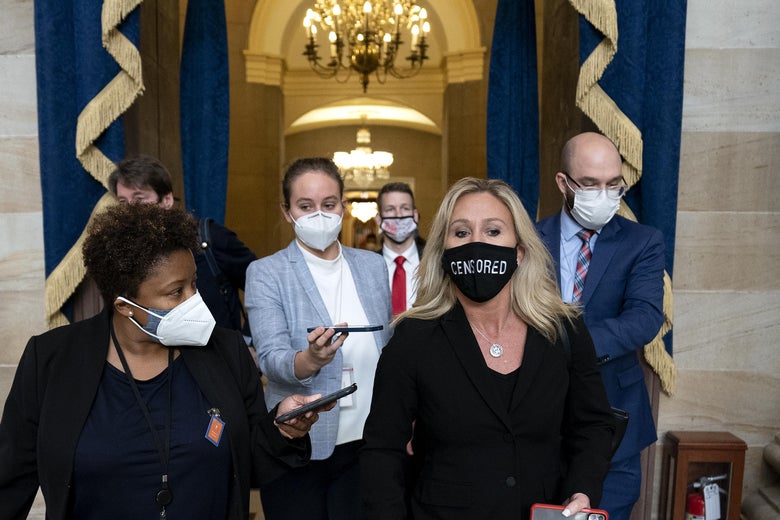 One of the persistent mysteries of the past week is what leads Republican House members—some of whom had to crouch on the floor of the chamber while the Capitol was under attack while others were whisked into unidentified locations for their own safety—to refuse to accept who was to blame for the insurrection. With the exception of the 10 Republican House members who voted alongside the Democrats to impeach the president, and a smattering of Republicans who acknowledged that the events of last week could easily have ended their lives but wanted to convene a commission to investigate matters, a non-trivial number of Republicans took to the floor on Wednesday to insist that the real injury of January 6, 2021 was to their own free speech rights. This was perhaps best embodied in the galactically stupid visual of Rep. Marjorie Taylor Greene, the QAnon supporting representative from Georgia, who falsely tweeted that Trump would stay in office after inauguration day, wearing a mask that read “CENSORED” as she spoke freely on the House floor, as captured on national television.

There was also Rep Jim Jordan’s inexplicable claim that one cannot “have a functioning First Amendment when cancel culture only allows one side to talk” (again, he was saying this freely on the floor of the House of Representatives). Democrats are really out to “cancel the president and anyone who disagrees with them,” Jordan said, before warning that “cancel culture will come for us all.” There was also the fractionally less coherent Rep. Glen Grothman from Wisconsin claiming, of the protesters in Washington D.C., that “they’re scared to death that nobody else will fight the cancel culture as we head toward an era when some things can’t be said.”

It is, quite frankly, beyond belief that the very same people who could have died in the United States Capitol just last week have somehow persuaded themselves that they’ve in fact experienced a more acute First Amendment injury than even insurrection itself. And that any effort to impose liability for the property destruction, terror, and death that resulted from the storming of the government is a monstrous encroachment on their right to talk. They make this point, to be clear, as they are talking and talking and talking about the pain of First Amendment encroachments, on the House floor. The real threat is to them, they say, as they point to the long and careening tour of Free Speech casualties of January 2021, from Donald Trump’s Twitter feed, to an armed mob’s vaunted free assembly rights, to their own, wholly imaginary right to talk endlessly—which they are, to be clear, doing, even as they whine about it. That it is all performed even when what they say is happening is plainly not happening is eminently incendiary and insane. And herein lies the problem. We have come to a moment in which one half of the country is fighting to be free of crippling, life-ending acts of stochastic terror, while another half of the same country is chillingly preoccupied with their right to just talk shit.

These harms are not the same.

Immediately after the Nazi invasion of Charlottesville, Mark Joseph Stern and I wrote about the ways in which the arcane constitutional debates over free speech cannot be taken seriously in a world in which one team is in possession of weapons of war. This morning, Henry Grabar wrote that one cannot debate and speak freely in the people’s house, if some members are armed with life-ending weaponry. We now know, beyond a shadow of a doubt, that some Republican House members were afraid to vote for impeachment because they were in literal fear for their lives and the lives of their families. These people feel they cannot speak, or vote freely, not because anyone is “cancelling” them, but because they would prefer not to die.

The false equivalency on display in Wednesday’s impeachment hearings was breathtaking. An armed insurrection against lawmakers in the seat of government is cast as functionally equivalent to Donald Trump being “censored” by “big tech” for violating their policies against inciting violence. Rep. Steve King (R-Iowa) has compared being deplatformed on Twitter to “cyber god’s Kristallnacht!” Fox News on Jeanine Pirro made the same analogy about Parler: saying, “They gave us a taste of this pre-election when they suppressed the Hunter Biden story, and now that they’ve won, what we’re seeing is the kind of censorship that is akin to a Kristallnacht.” Being denied the ability to say false things is not, in fact, Kristallnacht, but by all means continue to suggest that the injuries are equivalent.

Republicans cannot seem to dislodge themselves from the ever-expanding catalogue of First Amendment grievances they have assembled (unless it’s to note that their Second Amendment Grievances are almost as existential). Think, for one brief moment, about what it means for a political party to avail itself of the First Amendment not only to spread known falsehoods about the outcome of the 2020 election, but also to summon protesters to Washington D.C. to exercise their First Amendment rights to assemble and protest, and oh also, then for those protesters to not really be peaceful but armed rioters who brandished weapons and trespassed and mobbed and stormed, ultimately costing lives. And yet, inexplicably, the injury is to free speech. Inexplicably, it is the rioters and the fomenters of the riots and those who maybe shared floor plans with the rioters who claim, clutching First Amendment pearls. to be the tragic victims of “censorship,” and “cancel culture,” and the suppression of speech? Holy hell, people. That the affront they experienced last week and this week is not that hundreds of people almost died in the nation’s capital but, rather, that they don’t get to lie more, on platforms that give them access to millions of credulous listeners, is an affront to the very Constitution they claim to love.

Free speech is important. Really, really important. But the notion that the right to lie freely and unencumbered, about the scourge of non-governmental censorship is somehow equivalent to the right not be shot dead in the seat of government itself, is the most tragic perversion of American freedom I have ever witnessed.  Donald Trump was impeached today for actually inciting violence. This happened while his stalwart defenders carped on and on about their fundamental freedom to keep lying about it. It is the most on the nose indictment of “liberty” ever performed.

Readers like you make our work possible. Help us continue to provide the reporting, commentary, and criticism you won’t find anywhere else.